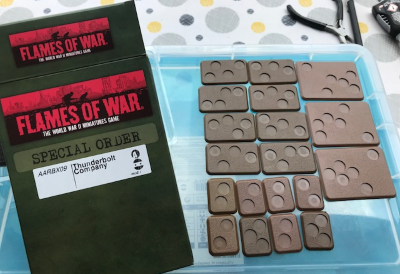 Painting Up a Storm – Fate of a Nation Thunder Bolt Troops

Today, Duncan looks at how he got his new Thunderbolt Company tabletop ready for the #FateOfFourGamers Challenge – prepare for some moaning about painting camouflaged helmets!

Thunder Bolts in a box

So I’m not going into an unboxing of what you get in the Thunder Bolt Company box, it suffices to say that in the Special Order AARBX09 you get all you need to run the medium-sized Thunder Bolt Company with the optional additional AT-3 Sagger and SA-7 Grail stands. All very nice and all that you would expect from a Battlefront box set.

The infantry cleans up nice and quickly so assembly is a doddle; good job really as there are 78 odd figures in a box – and so it’s on to the basing and undercoating. Anyone who knows me by now, or has read anything I’ve done on painting and basing, will know of my love of the Windsor and Newton Galeria Medium Grain Texture Gel. I was put on to this wonderful stuff by my mate Leigh, kudos to him because it is fantastic for basing but especially for desert basing. I always apply it prior to undercoating as it can be a messy job applying it to the base and always give it at least 24hrs to completely firm up. The results are really cool.

I’ve been speaking to Fez about using the Medium Grain Gel post-painting as, because it is an artist medium, you can add acrylic paint to it to pre-colour it. I’ve not tried this method but it’s a really interesting concept that I may have to give a whirl at some point. So bases dry and ready next up my other main squeeze – GW Zandri Dust spray. I love this stuff; it’s easy to get hold of, covers well and matches their small pot paint in colour exactly so everything gets a nice even coat. NB – had these been resin and metal models, like the IS-3s for example, I would apply a light grey primer first to the model to make sure that the coverage is even and consistent. I like Wilko Grey Primer here in the UK (again it’s cheap and accessible) but whatever you have should be fine.

So the with the easy donkey work over it’s on to making your Thunder Bolt troops look more like troops and not dunes. The bases were given a liberal dry brushing of GW Terminus Stone – again this is messy so get it out of the way early! Next up I wanted to lighten the uniforms up so I was going to go with more Terminus Stone but reflecting on the colours I instead went for using the non-dry paint option and deployed the Ushabti Bone. All of the Sa’ka uniforms got dry brush of this over the Zandri dust base forming but the base tone and colour for the models. These first few steps are nice and quick, the next parts not so much as we are on to the more detailed parts of the model.

I find that batch painting works best for me. So I will sit down, for say an hour, and paint all of the flesh tones on all of the models. I find that this focusses me on getting one part done at a time and keeping things consistent but can lead to believing that you are not making good progress as until you are around 85% finished on a model seeing that progress can be tricky.

As I said on to flesh tones, again GW paint, this time Cadian Fleshtone as a base on all arms, hands, faces and necks. Remember the necks, there is nothing more annoying than spotting a bit patch of flesh at the back of a model and having to go back several stages to paint them back in. Normally at this stage, I’d shade the skin but on this occasion, I’m not but more on that later. Paint the buts of AKs and the woodwork on the RPGs GW Balor Brown and the barrels and the metal parts of the RPGs Vallejo Black (Vallejo Black is an awesome colour – easily the best Black I’ve used.) as well as the boots. That blocks in a lot of the primary colours you need on the models. Next up we are going to add some light and shade to make the figures pop.

Not very frightening me…

So you could leave your figures there – they’d be serviceable – but a few little tweaks can really make the difference.

To make the belts and harnesses stand out you could paint them pure Ushabti Bone but I liked the dry brushing so I chose to dark the surroundings rather than lighten the belts etc. I used GW Agrax Earthshade and painted than on the sculpting lines of the belts, harnesses and pouches rather than all over the models themselves. This accentuates the recesses on the model and makes the definition between the two areas of similar colour much more pronounced; it’s also much quicker! The flesh and wooden areas were also given a wash, this time of Reikland Fleshshade, which give the skin a tanned tone and the wood a nicely rounded brown colour. The dark green on the RPGs etc. was given a wash of Secret Weapon Soft Black (I love this wash – it gives a smokier, gentler shade than pure black). Finally, the black areas on the AKs are given a very controlled dry brush of Vallejo Black Grey.

Again this is enough to move on to finalising the basing, but apparently, I don’t like myself, and I wanted to add some more colour to the model in the form of a brown camouflage to the helmets of my Sa’ka troops. Using a very old small drybrush I cut the bristles down so that I ended up with a stipple style brush with a head 2-3mm across. Using this brush I then used 50/50 GW Rhinox Hide and Mournfang Brown to paint 4-5 dots on each figures helmet. This does take a while but despite my moaning, I do like the effect and at a distance, it helps the figures definition on the table top.

We’ve made a start in making them awesome by using the W&N Gel but we can easily take them to the next level by using the simple application of the mighty tuft! Honestly, I’m not sure how I made do with just static grass as tufts add height as well as colour to your bases. I invested in a variety of tufts from Serious Play as they had some beautiful desert tufts theydescribe as mini dioramas (I can’t really argue with that!). I add 2-3 different tufts to each base, depending on the density of models and available space, and the difference is night and day. And there we have it. I think overall I spent around 6-7 hours in total on the Thunderbolt Company – which is not bad when you consider it was 20 bases of troops – but I think I will take a break now from the infantry and focus on the Egyptian Tanks I’ve got to crank out for month 2 of the #FateOfFourGamers Challenge… onwards and upwards and on to month 2 – September and I get my hands on the IS-3s!