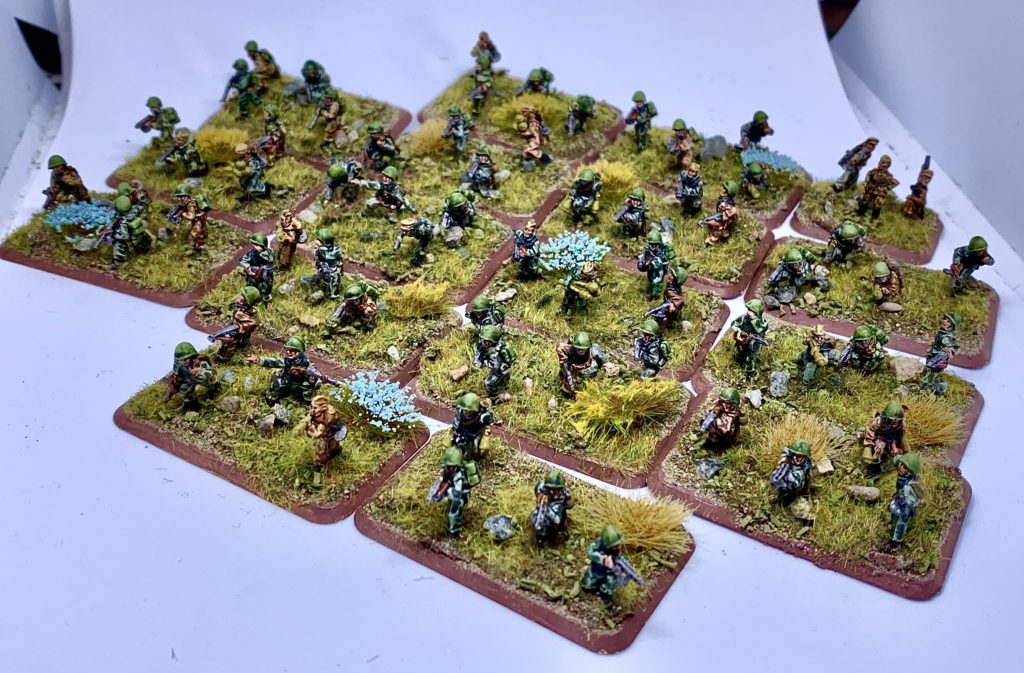 I recently got a set of the Soviet Sapper Engineers.  These guys are the older metal models that Battlefront produced and are as great today as they were when first released.

Being such a big platoon (17 stands inc Flamethrower option) I wanted to produce a lovely result but in a more limited time frame.  Therefore I decided to go the contrast paint route for the majority of the painting.  This will also allow them to fit in nicely with my existing forces.

Here is my step by step process

1. First off, I separate the figures and remove the flash, cleaning them up.  When they are ready to paint they are then glued to their bases and texture added (I used Vallejo earth texture).  They are then sprayed white.
Top tip if you are in the UK, Wilkinson’s do an own brand white and grey matt primer which is perfect and is only a fiver.

2.  With the figures primed I actually start with the contrast paints for detail first and then leave the uniform until last.  Therefore the faces and hands were painted with Gulliman Flesh.

3.  Next up is the helmets which is Militarium Green.  Make sure you get under the rim of the helmet or you will end up with white showing.  I also use it for any radio and backpacks.

4.  Boots are then painted black (not contrast).

5.  I use Vallejo Middlestone to paint the Panzerfausts (one per base) and then Snakebite Leather on all the wooden handles of the tools and stock of the SMGs.

6.  I used Skeleton Horde to do the non helmeted troops and then Basilicanum Grey on the all the metal parts of the rifles and tools.

7.  The Engineers had two colours of uniform and I wanted to represent both.  I did approximately 25% of the troops in the Yellow-Brown, which was a mix of  3:1 Skeleton Horde and Gor-Grunta Fur.

The remaining troops were painted with a mix of   2:1:1 Grpyh-Charger Grey,  Basilicanum Grey and Militarium Green.

8.  The body armour is then painted with Black Templar.

9.  For straps and webbing I use normal Vallejo paints.  Here the rifle slings are painted Red Leather.

10.  I use Citadel Boltgun Metal to highlight the steel parts of the weapons and tools and painted the backpacks and bags Vallejo Khaki.

11.  The engineer uniforms had a patchy camouflage effect and to represent that I applied Vallejo Saddle Brown in little patches to the brown uniform and Vallejo Camo Dark Green to the Grey Blue uniforms.

13.  For basing I paint the base with Vallejo Flat Brown (I water it down so it flows easier).  Then the sides of the base Vallejo Saddle Brown.  When dry, I used watered down PVA to attach a flock and stone mix I found on ebay called ‘rugged moss mix’.  When that’s dry applied patches of Galeforce 9 grass.  Then its just a case of adding some random flowers and tufts as you see fit.  The figures were also given a matt varnish.  I found contrast paint can be shiny.

Its not going to win a best painted award but it is going to look great on the table.  What I would call a high table top standard,  If you wanted a slightly darker look just change the white base coat for a light grey.  That will darken the contrast paint.

These guys will be forming up with a Heavy SP Gun Regiment and then getting ready to clear Budapest using BFs new City Fight Ruins.