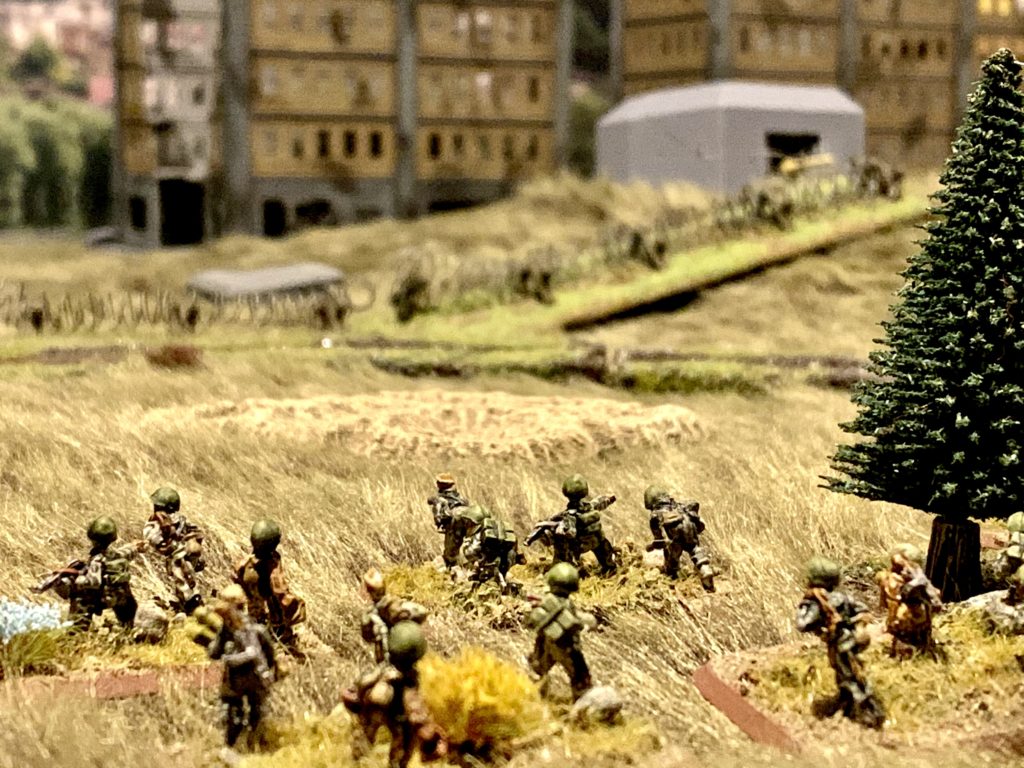 One of the great things about the new German Bagration book is that it has way more than the actual army lists, not only does it have the city fight rules it also includes a linked scenario based around the fighting surrounding and in the German’s fortified cities.  The mini-campaign combines traditional missions with all new ones based around a defensive feel.

As mission 1 in the campaign, I decided to get a game of Onslaught in.   This new mission has some familiar parts to the D-Day landing scenario with a defending force half the size of the attacker (and 60% in reserves) but with some great defences.  Of course, this mission doesn’t have boats, waves of troops and also forces aren’t immune to formation morale.

The Germans opted for two Panzergrenadier Platoons, who were rated as trained so save on points, plus a HQ, three SS Panthers, the ‘lucky’ card as well as four MG Nests, and two 7.5cm bunkers.   The mission also provides four Minefields and four barbed wire sections.  While the barbed wire in this version of FOW is represented by a token, I still have the 8-inch strips Battlefront previously sold so used two of these instead.  Both infantry platoons started on the table with one in ambush.

Facing them would be a Forward Detachment Formation (command card) consisting of two T34/85mm platoons with four tanks each, a Hero Motor Rifle platoon with AT grenades, a medium-sized Sapper Engineer platoon, five SU76s and three ISU122s.

The advance unit deploying further forward would be the Sapper Engineers.

Oberleutnant Zimmer gazed out from his foxhole at the defensive line.  Minefield and barbed wire protected his flank while two bunkers and pillboxes cover the avenues of approach.   For now, he and his men were on their own.  Even his Major was away, giving an update to higher command.  He knew that platoon 2 was located nearby, they were part of the plan to lure the Soviets into attacking this part of the line.  Make it appear weak and then spring the trap as they removed their camo nets.  A perfect ambush.

As dawn broke he heard the first sounds of the Soviet Artillery.  Soon explosions erupted, luckily they were just spotting rounds and seemed to fail to range in.  On his right, he saw movement as Sappers surged forward to the creek bed.  He had to hope the flank would hold.

Ahead, some sort of self-propelled guns raced down the road, looking for better firing positions he expected, while T34s advanced quickly through the crop field.  No sooner had he spotted them than the bunkers opened up and blew two tanks to pieces.  Now knowing where the attack was coming from, he ordered platoon 2 to spring their trap.  He called up HQ requesting the release of three Panthers, pleading his case, but to no avail.

The artillery bombardment was now getting heavier.  76mm shells screamed down, killing a section of men while heavier artillery also joined in.  Lucky they had built their foxholes deep!  A bright flash announced a flame thrower opening up on the bunker on the hill, he could only imagine the fate of the men inside.   He heard the MGs open up on the Sappers who were now on the barbed wire line, preparing to cut it.  His own MGs were out of range but tracking more Soviet infantry approaching.

With a grind of gears he saw an amazing sight; three Panthers appeared on the road, firing as they moved, causing another T34 to be knocked out.  The remaining AT bunker could not find its target but later reports came in that the MG nests had claimed a heavy toll on the sappers and Soviet infantry.  The other platoon of T34s had now gone firm in a crop field and engaged the Panthers, a lucky shot shearing through a turret before cooking off the ammo inside.

Zimmer braced as the T34s advanced on his position.  A brave soldier popped up from the foxhole, and despite the artillery which was still whittling down his force, managed to hit a T34, stopping it in its tracks.  As the T34s made contact he rallied his men to counter-attack, hitting another with a panzerfaust and driving the remaining tank back.  He then had his men add suppressing fire to the Soviet infantry, scything through them as the Soviets rapidly advanced.

Another T34 was knocked out as the bunker reacquired its target.  On the right flank, the defences were crumbling, the Sappers cleared the wire and skilfully advanced over the mines.  Even worse, flamethrowers opened up on Platoon 2 and he could hear the burning men’s screams on the wind.  The MGs continued to take a toll, but would it be enough?

The T34s in the crop field started to reverse, quitting the field of battle, yet things were looking dire everywhere else. Half of the force is now dead mostly due to the damn artillery.  Zimmer’s Major seems to have arrived, he imagined his superior was working his way through the ruins to assist; it will be good to see his friend and mentor.  He hopes the major will be proud that he has held the line and Zimmer couldn’t be prouder of his own men.

They remained calm and continued to focus fire, cutting the soviets down on both flanks as they assaulted driving them back.  The Panthers now free of the T34s, advanced forward to cover his platoon and to stop the Infantry flanking into his rear positions.  As they did the final T34 explodes as almost point-blank range.

He could sense the tide was beginning to turn.  The Soviet infantry remained completely pinned and dug in. The mass of MG fire, aided by the panthers continued to take their toll.  Luckily the smoke pots the Sappers put down on the other flank didn’t work properly but despite this, the Sappers stormed through the MG fire and killed platoon 2 to a man.  All that stood between them and encirclement was his Major.

Known for his bravery the Major advanced through the ruins firing his SMG as he went cutting down the Sappers.  He and his adjutant assaulted but to his horror, the Sappers counter attacked and killed them all.  He was now alone with only a handful of men and while the Soviets to his front had been beaten to a standstill it wasn’t enough he would have to fall back to the next line.  He had done all he could.

What a great game.  I really thought the Germans had it, however, formation morale finally finished them off.  Those MG nests really caused a lot of casualties though and it was great fun using defences again.  Had the reserves been core rather than Panthers (maybe more Inf and some Marders) I think the Germans could have pushed them back.  The Sappers were on a morale check and the infantry in the centre were almost gone, they just needed a fresh platoon to assault them.

Once my PZ/IV70s are ready I will look at the next game in the campaign.  Due to all games being linked there will be a handicap for the Germans defeat as they play the ‘Hammering the Line Scenario’.