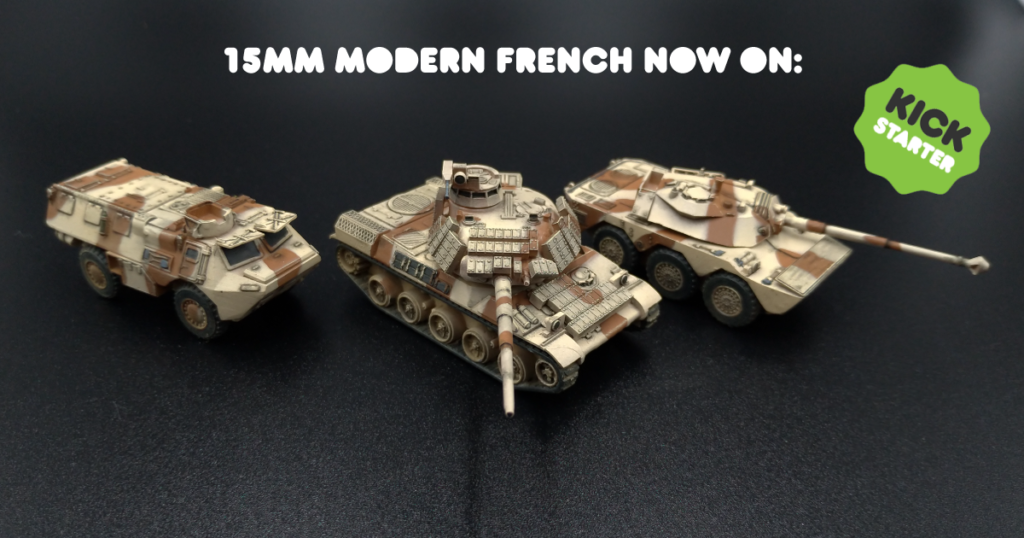 Normandy Miniatures are a relative new-comer to the 15mm plastic market, having recently released two kits, a Panzer IV/70/Jadpanzer kit and a M8 Greyhound/M20 Scout car kit.  We have just received review copies of those kits and Ben and Duncan will be reporting in respectively soon.

But, not being one to rest on their laurels, Normandy Miniatures have now got a new kickstarter and this time its the 80’s and onward that are getting some love!  Perhaps unsurprising for a French company, Normandy are doing some cold war/modern French!

The basic kick-starter is for the AMX-30 main battle tank.  This comes not only with the 80’s AMX-30B2, with optional skirts and thermal sensor, but also the nineties version with ERA armour!  Here is a painted prototype of the ERA equipped version, based on the CAD model.  At this stage it looks very good, with lots of detail captured, especially around the engine deck.  Hopefully the transition to steel tooling will see that all carried across.

The tanks come in boxes of five.

Of course, once we get to the Stretch Goals it gets really interesting as we see a plastic AMX-10RC armoured car!  By far the beastliest armoured car in Team Yankee, sporting as it does a 105mm main gun, the AMX-10RC was a big hit when the Free Nation book came out.

The prototype looks good, with stowage baskets and the like in place, plus some good detail on the turret roof with the conduit too.  The muzzle break and turret shaping are being tweaked, apparently.  I’m not enough of an expert on post-war French light armour to notice what needs tweaking though.

As with the AMX-30 MBT, the AMX-10RC comes with a variety of options, mostly focusing on the various up-armour programmes the AFV has been through in recent years.  The kit has options for simple sand skirts, bolt on applique armour and the more comprehensive SEPAR anti-IED armour of recent years.

Much like the tanks, these come in boxes of five.

The final vehicle is another popular choice, the VAB wheeled APC.  Benefiting from larger platoons than its IFV counterpart, plus a large MILAN platoon in support, the VAB mounted infantry have proven to be a go-to for French players.  The box also builds the AT variant, the Mephisto, with its elevating missile turret.
Again, the prototype has lots of top deck detail, optional buttoned/unbuttoned windscreen shields plus additional features such as tow lines and the like.  The render also shows the M2HB in place.

Beyond that, the last sketch goal in FAMAS equipped infantry (plastic as a goal, metal as a fall back).  There aren’t any details on exact box contents yet, but we can see a riefleman with FAMAS, a suitably officer looking type, and an anti-tank gunner with an LRAC rocket launcher.

Supporting all this are a variety of pledge prizes such as an additional infantry figure with a flag and a PLUTON missile launcher, for when you need to throw the nuclear towel in, presumably!

Its one to watch.  Outside of the French, the AMX-30 and VAB found export success in the middle east so could be used for lots of different wargaming scenarios.