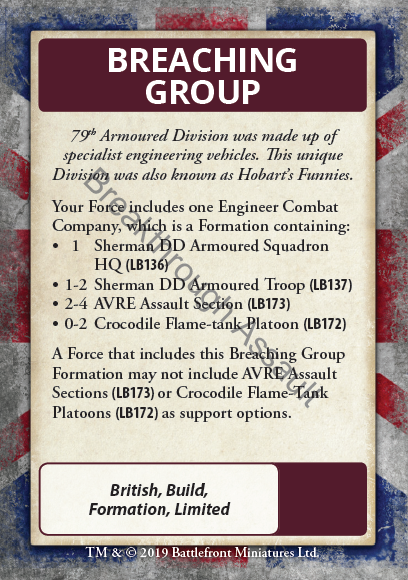 Following on from Mark’s two articles on the British Breaching Group Martin gives us a look at collecting, modelling and painting a breaching group.

First up, I have to say I was fortunate to have some of these models already as Battlefront no longer make some of them and Covid-19 has made it a bit tricky to get items. Others are from Skytrex who make some of the specialist vehicles I’ve used in my force and stowage items are mainly from Debris of War .

So what is in my Breaching Group? Well, unlike Mark, I wasn’t interested in building a particularly effective force for any game. Instead, this is something I have done specifically to play beach assault games with and my choices and command card picks rather reinforce this.

Lets start with my basic list, support is not included in the list; I would typically take some rifles or commandos, as well as air support, to round this out to a typical 100 points level.

The idea behind my force is that I have a DD troop arriving on the beach in  support of my assault infantry and then protecting the specialist engineering tanks coming into battle to enable the main armoured units to get off the beach and expand the beachhead. So my tank force looks like this:

I started with the HQ.
Now, in an ideal world, what I would have liked here were Sherman DD tanks with the canvas screens removed but, after a fairly extensive search, I couldn’t find any of these in 15mm that I could get hold of. so I settled on the standard Battlefront Sherman M4A1 model for these.
To make them look a bit more like the picture below I added a small extra piece of plastic to make a representation of the frontal deck structure. Also, my platoon would be equipped with Porpoise Mk2 equipment sledges. The sledge was designed to carry extra ammunition so the tanks didn’t run out of rounds on the beaches. These were designed specifically to fit underneath the Sherman when it was loaded onto a Landing Craft Tank (LCT) the first tank would drag the sled on with a 15 ton capacity chain fixed to the front which the next tank would sit over (hence only 1 or 2 per platoon) and the sledge was connected to the tank in front by a pair of fixed arms fitted with explosive bolts enabling the tank to quickly drop off the sled before going into action without risk to the crew.

Next up are the amphibious Sherman DD tanks, Battlefront make a model for this, BR134 available from Direct sales. These went on my shopping list.

My final Sherman unit has mineflail tanks known as the Sherman “Crab” Flail, I had two of these already but this model (BR132) is, currently at least, no longer available. These were deployed in units of five tanks, working in pairs to clear a lane of advance with the fifth tank providing a ready reserve for the inevitable mine strike.  To represent this with the new list is tricky as you only have three-strong tank platoons.  As I only had the pair of tanks with flails, my third tank would have to be another DD model ready to follow through the newly cleared lane.

Next are my two troops of AVRE tanks. I decided one would be a basic example and the other made up of specialist vehicles. The plastic Battlefront Churchil makes up my standard AVRE tanks and for the specialist versions my models came from Skytex, one equipped with a small box girder (SBG) bridge to make a ramp up over the sea wall and the second equipped with a facine carrier (bundle of sticks) to fill in any anti-tank ditches slowing down my armoured advance. Luckily the modes match up OK size wise but are some what different in detail.

Lastly, in support, I have a unit of Crocodile flame tanks to take care of the defending infantry.  Again these are the excellent Battlefront plastics.

Most of the task was simply to assemble the kits and add a bit of stowage. The Sherman DD and flail tanks needed a bit of preparation to clean up the odd bubble of excess resin on the under side of the deck to ensure the track units sit properly.

Remember when sanding or cutting resin make sure there is plenty of vetilation ideally use an air extractor of some sort if you have one. Where a suitable dust mask and damp down the surface you are cutting/sanding, resin dust really isn’t something you want to inhail. I actually normally do this outdoors if I can.

To model open hatches on the resin turrets you have to cut the commanders hatch into two pieces this is straight forward as their is a nicely cast line to follow, gluing them in takes a little care and a pair of tweezers to do, or you risk gluing it all to you and not the tank as the interface of the parts is quite small.

The more difficult bit of modelling was making the flail chains from the continuous length of chain supplied in the blister pack. I decided to cut the chain into 7 length to make the flails (there are 42 on the real tanks) using a pair of clippers. I made these in two lengths (15mm and 21mm) so I could offset them on the drum making them a little easier to fit. The four longer ones getting put in first which I draped over the drum, I then infilled the gaps with the slightly shorter three fixed to the very top of the drum  This took a bit of time but ended up looking about right.

The Imperial War Museum has a great photo archive of these beasts and their Tank Chats videos on youtube are well worth catching to see these tanks in action.

For my engineering tanks, things weren’t quite as easy. The Skytrex kits are all metal and a lot more effort is needed to clean these up before assembling as the moulds are fairly old. I actually spent more time on preparation and assembly here than on the actual painting. The facine carrier is pretty straight forward but with no instructions or online guide took a bit of care to get right. I left the facine so it could be removed from the model and for ease of storage.

So I could pose the SBG (single box girder) bridge connected to the tank, I had to do a bit of extra strengthening and adjusting of the parts. I drilled through the infill in the winch housing allowing me to create a strong cable fixing point to try and support the weight of the bridge. This part also had some pins added to the legs to increase the strength of the joints between the winch housing and the deck. I made the retaining cable from sewing cotton liberated from my wife’s sewing box. This is a single continuous loop of 2 ply cotton cable running from the front of the bridge, up over the pulley at the top of the A frame, and through and round the back of the drilled out winch housing, returning to the anchor point on the other side of the bridge. I only added this once the tanks and bridge were painted and fixed to a base. Normally I don’t base tanks but in this case I decided this would keep my model safer and its more than a bit front heavy.

To paint these I simply followed the excellent Colours of War painting guide for British late war tanks and the online article from James Brown on stowage painting. The canvas screens on the DD tanks I wanted to look damp and grimy so these were painted in kahki (VMC Khaki) and highlighted with a lighter shade (VMC German Camo Light Beige) before they got a thin black wash which I deliberately let form pools and puddles so as to try to mimic the effects of exhaust gases, gun soot, water staining and differnetial drying, after all they have just emerged from the English Channel. The pictures below illustrate the basic painting stages.

Before I added any decals I spent a bit of time doing some research into what units had which vehicle and how these were organised within 79th Division – I discovered some of the tanks retained their original unit markings whilst others didn’t so, unusually for me, this force displays markings from a number of different units.  The added bonus is it allows me to mix some of these with other Sherman/Churchill units I had already.

So that’s it from me , hopefully this might inspire some of you to look at modelling your own specialist DD formation and I’ll leave you with a picture of the completed Breaching Group