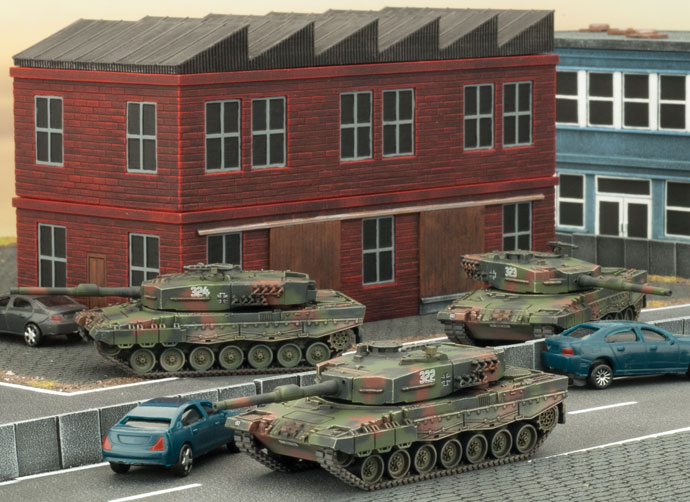 Welcome readers, to Breakthrough Assault early review of the next Team Yankee publication, Leopard. As the name suggests this is the eagerly awaited army book for the forces the Bundeswehr, or to you and I, the forces of West Germany in the mid 1980s.

From Ben’s exclusive sneak peak at the unit cards over the last couple of weeks you have a rough idea what to expect, however hopefully, this will give some more details and some inspiration for you budding NATO commanders (or a chance to know your enemy!). Leopard comes in a respectable 48 pages, in full colour. Included in the book are,

I am sure you will agree that’s a lot to pack into 48 pages! Leopard follows the same type of formatting as the Team Yankee rule book. Its full colour, with a generous mixture of maps, background and diary extracts. The latter really helps to build the universe and ‘lore’ of Team Yankee, expanding the story you see in the actual novel. Some units such as the PAH AT Helicopter even have their own little stories that help to explain their rule. A nice touch that helps you appreciate the nature of the forces you will field.

One thing I have to mention is the quality of the images. While the BF studio has always done a great job photographing the models they have really shifted up a gear, especially with the dynamic photos of the aircraft and AA missiles launching. The three companies choices offer a wealth of options and BF have started to expand from the more limited initial choices presented with the US and USSR. You 2 x infantry choices with the core Marder Panzergrenadiers as well as a mounted, smaller recce platoon for your Panzeraufklarungs. While Leopard 2 is an expensive beast you can also field its little brother the Leopard 1 to add some hulls and fire power.

Interestingly the Germans have some really punchy Jaguar units, which server a similar function to the ITV but come with FA9 and a cool forward defence rule. This means they don’t count as your FA4+ choice in missions with deep reserves. Perfect for when facing a T72 horde. With AT23 it will certainly make them think twice about approaching you.

Support wise you have 3 arty options, with heavies, mortars and rockets (rockets with minelets is a big favourite of mine).   Adding to this is a staggering 3 x AA choices. The Gepard is a Vulcan/Shilka on steroids with the cost to match), the Roland which handy comes in a platoon of up to 6 and Fligerfaust Grupper, consisting of attachable MANPADS. Combine that with the Marders anti helicopter stat on its main gun and the soviet air is going to have to be careful.   Finally I have to mention the Tornado which looks beautiful and fulfils a glass hammer role with a AT8 Salvo template. Mine will certainly be painted up as RAF colours of 617 Sqn!

The key thing about these lists is the variation that can be made. It’s clear that BF have spent a lot of time making sure that there are lots of good builds and you can really go to town combining 2 or even 3 companies happily in 3 points. I shall be detailing some sample lists later in the week. Beyond the background and army lists the book still has further offerings, of particular note is the mini campaign following Kampfgruppe Millar. I will admit that I rarely play campaigns or none main rule book scenarios however these look fun. The 3 scenarios are all linked and whether you win or lose has ramifications for the next battle. The first mission involves holding a forward line of defence for 3 turns before falling back for another 3 into a rear position. Kind of like a 2 stage fighting withdrawal. What’s nice is that the scenarios involve smaller point armies and use a lot of core equipment rather than support. This means that you should be able to quickly field the required forces rather than having to buy up the whole range. While each scenario gives the recommended ORBAT and equivalent points value is also given, thus allowing you to defend with your US or even Soviets in a full table reversal.

As is becoming standard in the new books, you also get a detailed step by step painting guide. In this case it’s for NATO tri colour camo. This is supplemented by a quick overview of how to paint the infantry and PAH Helicopter.

Well there you have it, all the secrets are out and we now know what to expect from Leopard.  I think this is an important next step in Team Yankee, the speed of this release shows BF’s dedication to the system and from BFs hints on the year ahead article we know there is more to come.  I think the Germans are going to offer a subtly different playing style to the US forces and I can’t wait to try out some of the more different units such as the Tornado cluster munitions.  On Wednesday I shall be discussing some sample lists, showing what can be made at 100pts and highlighting the fact that multiple companies is hugely viable with this new force.