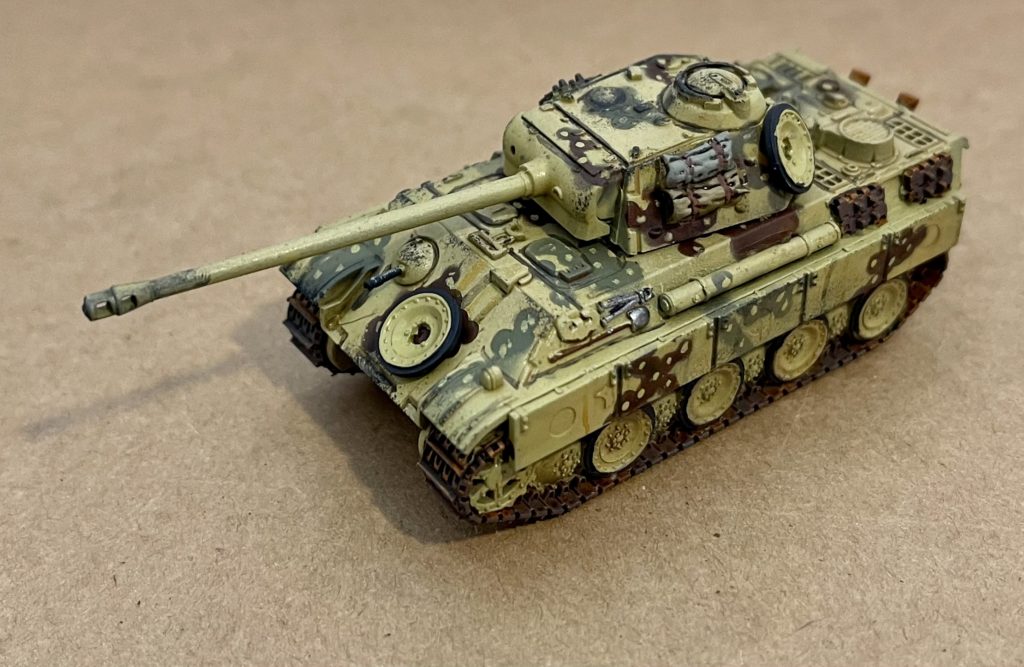 With the arrival of the new Battlefront plastic Panther Gs, I set to a weekly project of painting up 10 for my Brigade Panther force.  This also offered the opportunity to try out the ambush camouflage stencils sold by Anarchy models.

Let’s take a look at cracking out ‘Ambush Disc’ camo in quick time.

I base coat the model with a grey primer.  In the UK I get mine from Wilkinsons at the low price of £5 per can.

I chose to use the Ammo by Mig 1939-1944 German Standard Colour set for my three colour camo.  I love Mig paints, they go through an airbrush with no need to thin.  I spray the model with Red Brown Shadow.  I deliberately don’t worry about the tracks.

Here we get started with our stencils.  I place the stencils at any area I want to remain brown.  Make sure you push the stencils down firmly and use a cocktail stick to get them to bend around raised areas.  In this picture it is easy to see the stencil as they are yellow from where I did a test model.

The model is then sprayed with Olivgrun Opt2 in the same way as the brown at step 2.  Make sure to leave the stencils in place.

A repeat of step 3, however this time where I add the extra stencils will remain green.  I then spray the model with Dunklegelb (early).  This time I make sure the tracks are covered as well.

Here is the result after peeling off the stencils.

I cover the whole model in a liberal application of Ammo Acrylic Filter – Tan.  This adds some depth and contrast to the camo and added decals.

I now use a pin wash to blackline the model.  For this I find Citiadel Contrast Paint – Basilicanum Grey works well.  I place it in any indent, around panels, and around raised areas to make the detail stand out.

Next I apply a Mig Filter – Tan for 3 tone camo.  This helps to tie the camo together and slightly alters the tone of the yellow, which is a bit bright at the moment.

I pick out the tools with with Vallejo German Grey and Flat Brown.  I also apply the same green and brown as the hull to some of the wheels.  Across the 10 tanks I painted, I used this is show which platoons each belonged to.

The tracks, exhausts and spare track links had Citadel Contrast – Gore Grunta Fur applied to it.  I also picked out some of the metals with Leadbelcher.

Vallejo Track Primer is applied as a heavy dry brush over the track and track links.  The wheel rims were planted with German Grey.

For finishing touches I added some more track links and a spare wheel.  The exhaust has Orange Brown layered on and when dry a Light Rust Wash  applied.  I also did some weathering by sponging on German Grey as a chipping technique and using a Light Rust wash to draw some vertical streaks out of heavily chipped areas.  Finally I used the same Dunkelgelb as the main model to apply dots to the green and brown camo to create that iconic ambush camo.

I hope that proves useful for your own German vehicles.  I will be using the same technique with my King Tigers and Jagdtigers when they arrive, so stay tuned!