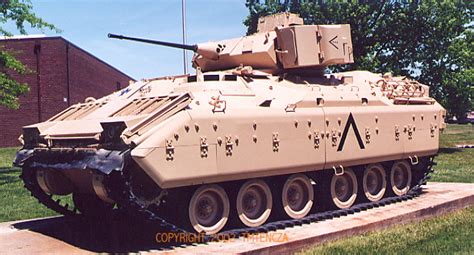 The Bradley is designed for reconnaissance and to transport a squad of infantry, providing them protection from small arms fire, while also providing firepower to both suppress and eliminate most threats to friendly infantry. It is designed to be highly manoeuvrable and to be fast enough to keep up with heavy armour during an advance. The M2 holds a crew of three: a commander, a gunner and a driver, as well as six fully equipped soldiers.

The M2 Bradley was the basic production model, first fielded in 1981. The M2 can be identified by its standard TOW missile system, steel laminate armor, and 500 horsepower (370 kW) Cummins VT903 engine with HMPT-500 Hydro-mechanical transmission.  A particular design requirement was for the vehicle to keep up with the M1 Abrams, which it was intended to support.  [Source : https://en.wikipedia.org/wiki/M2_Bradley).

In the 1985 timeframe of Team Yankee, the M2 Bradley would have been in service in limited numbers.

The Bradley IFV is a hotly contested subject in Team Yankee groups, especially amongst the US players (myself included).  Battlefront leaving then out of Stripes, confounds most to be sure, given their popularity.  But putting that aside 3rd party manufacturers seem to be plugging on regardless, bringing us to the Skytrex 15mm Bradley Kit.

The kit is a multi-part resin and metal kit.  Upon opening the package and laying out the components, my first thought was immediately -wow-.  The quality of the mould on the hull and track sections is impressive, getting towards a plastic mould level of quality. There is some flash to clean, as to be expected.  But mould lines were extremely thin, and fill between the track wheels could be pushed out rather than cut out, it’s that thin. Fitting the tracks to the hull required minor trimming to get a snug fit, but this only took a few seconds.  A quick dry fit shows just how well cast the parts are. A few dabs of glue later and we have the finished model.  The metal components also fitted snugly without any effort or trimming This is the first time I’ve had a Skytrex kit and I have to say I’m really impressed with the quality.

Sytrex expect the Bradley kit to retail for around £8.50 inc VAT to the UK market, or just over £7 Ex VAT internationally.  For a resin / metal model of this quality the price seems about right.

Next step is to apply some paint and give them a spin on the battlefield with some custom rules!