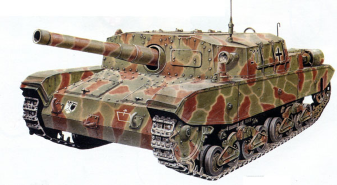 Today Duncan is back looking at the wonderful world of the beute panzer, this time looking at Italy and how to incorporate Italian vehicles into your MW forces.

By now I don’t think it’s going to come as a shock to anyone that I love to diversify my German forces with the myriad of captured and repurposed vehicles from their allies, enemies or anything else lying about the place. I’ve been looking at Italy quite a bit recently and this has opened the door to including more wonderful German designations into the proverbial pot.

MW players will be very familiar with the Italian Semovente M41 da 75/18 self-propelled gun. But, by the time that the Allies invade the Italian mainland in 1943/44 and the capitulation of the Italian armed forces, the design of the Semovente had moved on.

The Semovente da 75/34 armed with an L/34 gun mounted on M15/42 tank chassis and saw action during the defence of Rome in 1943 and later served with the Germans in Northern Italy and the Balkans. 141 were produced during the war: 60 before the Armistice of Cassibile in September 1943, 81 later under German control.

The Semovente 75/34 took inspiration from the German StuG III and like the long-barrelled StuG become more of a de facto tank hunter rather than an infantry support weapon. It sported heavier armour that then original the 75/18 model, what could probably be considered average for the Mid War period, and the 75/34 gun gave it decent firepower.

The Semovente da 105/25 was the final stage of Italian design of their assault gun series. Initially the intent was to mount a 105mm gun on the new P40 hull.  However, this was dropped, due to production issues, in favour of the M15/42 hull.

To accommodate the large 105mm gun the hull had to and this new chassis became the M43. As well as a wider hull the M43 had 75mm of front armour and combined with its powerful 105mm gun the Bassotto (“Dachshund”) was a popular addition to the German arsenal in Italy.

The Semovente da 90/53 was Italy’s answer to the T-34 and the KV-1. An ungainly, slightly impractical answer, but nevertheless, ultimately the Semovente da 90/53s 90mm HEAT round could penetrate 70mm of armour at an impressive 2km. Yes, the chassis offered little protection for the crew, and yes the engine could’ve had a little more grunt but for what it was and the time frame it was manufactured in the Semovente da 90/53 did a job.

Only 30 vehicles were produced, 24 vehicles of the 10° Ragruppamento Semoventi were heavily used during the Allied invasion of Sicily in 1943 with the remaining vehicles soldiering on after the armistice in German service, mainly as mobile gun positions.

Shamelessly stolen from a great article on the Flames of War website is a very interesting list of all the deployments of the various Semoventes in German service during the latter part of the war in Italy and the Balkans:

It is straight forward enough to use the Semovente da 75/34 in our Italian forces by using the StuG (Late)Assault Gun Platoon or Company from Ghost Panzers (this is my plan so no stealing you lot… I’ll know if you do!).

The inclusion of the Ghost Panzers command card for the 189th StuG company allows us to bring the awesome StuH to the table top and this 105mm armed assault gun is the perfect analogue for the Semovente 105/25.

Finally, we have the Semovente da 90/53, the relative problem child here. You have some options; the Hornisse might be an option but you may get accused of modelling for advantage in a more competitive environment. You could use it as a Marder, the gun might not be similar but the chassis footprint is much more akin what you are trying to represent on the table top.

Personally, I would use the Semovente da 90/53 as a Wespe; a bit controversial I know. The reasoning behind this is that later on in the Italian Campaign the few remaining Semovente da 90/53 in service were used as field artillery pieces.

With its 20mm cannon the AB41 was the eyes and ears of the Italian armed forces and the Germans, not one to pass up reusing other nations assets, saw the versatility of this scout car and 37 found their way into German service. The AB43 was only produced after the Italian armistice and sported an up-gunned 47mm gun; this meant a whole new turret but this didn’t stop the German’s manufacturing around 120 AB41 and AB43 before the end of the fighting in Italy.

There’s not much to consider here; the AB41 is a perfect analogue for the Sd Kfz 222 and we can easily exchange the AB41 for these. The AB43 might be trickier but the most sensible course of action might be to use the Sd Kfz 222 with the 2.8cm AT Rifle as the basis for getting it in game.

I hope that is a useful stroll through some of the options we have to add Italian vehicles to our MW German forces to give them a taste of the Italian peninsula.