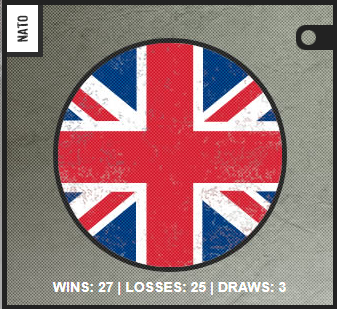 In the name of the Queen – British Firestorm: Red Thunder Report

This is the BBC News at Six, with Angela Rippon

“Good evening, our breaking news this evening is from our Foreign Correspondant, Jonathan Cole in Dortmund. Let us pass over to Jonathan straight away… Jonathan?”

“Thank you Angela. I am standing here in front of British High Command in Dortmund, currently unable to get a face to face interview with forces Commander-in-chief: General Sir James Glover. However, we have been able to receive scattered reports from the front line, especially from the British First Corps in Hanover. Naturally, British High Command have ruled Hanover an active war-zone and all journalists are banned from eastward travel, but we did manage to get some information on troop movements in the area: ‘British forces are holding well, many Soviet advances have been stopped in their tracks, and any breakthroughs have been beaten back thanks to the combined efforts of the Irish Guards, Gordon Highlanders, 17/21 Lancers, and the famed ‘Iron Division’ in their trusty Chieftain tanks’
We will bring you more information as it breaks, but as it stands, the British Army are holding out despite the news from Copenhagen that the Folketing has been disbanded and a puppet government installed whilst the Soviet forces strive to maintain order in the invaded territory. More as it happens, back to you in the studio.”

The British 1st Corp in Hanover The old German state of Hanover has close ties to Great Britain, our longest reigning monarch was descended from a family of German Royals, the House of Hanover starting away back in 1714 with George I, and finishing in 1901 with the death of Queen Victoria, before the house of Saxe-Coburg and Gothe took over ruling our dear green land. Naturally, it was due to this ancient relationship that after World War II that the forces of the United Kingdom and Commonwealth were charged with maintaining a military presence in the area (including the rest of North-Western Germany).
In 1985 when the Warsaw Pact forces first pushed through the Fulda Gap, and across the rest of the border into Germany, the British 1st Corp were standing in the line alongside their West German and American Allies. The British forces will continue to hold this position until ordered to retreat by NATO command, or until reinforced by the newly arrived British 2nd Corps. Going by the current situation, and impending encirclement, it may be time to pull the boys back and focus on a pointed counter-attack.

Not only are the British Forces holding Hanover, there have been times when companies have been pulled out of the line to support other areas. The British forces are expected to assist in Bremen, and Frankfurt. Should these two positions hold, it will allow the British forces to push the Soviets back, freeing up Hanover and allowing a push into Brandenburg, an unexpected advance from our brave troops.

In the field, the British forces are just about on-par with their Soviet opponents in terms of victories and defeats. These results have only come around from the dedication and skill of the Commanders taking the field with their forces, and pushing back against the Red Menace, as our American friends would call them. Below, we shall highlight some of the notable British Commanders for the Firestorm: Red Thunder Campaign, and their exploits in the field.

Based in Hawaii, US, Storm Caller is Second-in-command in the British Forces. Registering 3 wins out of 3 games, and earning the highest amount of Commendations from any British commander to date, an impressive 63. Storm Caller is active in encouraging our boys and girls on the front line into action, keeping morale high and leading by example with highly impressive reports, helpful advice in the briefing room, and generally an excellent officer all round.

Major Alexander is a member of the same gaming club as I am. He is also very active in the discussions in the Briefing Room, especially within our military intelligence branch. Major Alexander is always keen to report from the field on his experiences after battles. Currently also registering a perfect record of 2 wins from 2 games, Major Alexander was mentioned in dispatches for his high quality report on a mission in Hanover.
Major Alexander has a promising career ahead of him in this campaign, and no doubt much like Lieutenant-General Storm Caller, will carry on encouraging and improving the combat effectiveness of our troops on the front line.

Our man in Germany himself, Colonel Hawk is an impressive commander, eagerly helping our in the briefing room and encouraging others with their battle reports to deliver excellent results. Hawk has supplied the British forces with some much needed morale within the force. Acting as almost a third in command, Colonel Hawk has an almost unblemished battle record to support him too. With 2 wins and a draw on his record, and each report delivered meticulously, one could almost say with German precision, his reports are consistently rated highly, despite the Queen’s English not being his mother tongue.

Finally: Major-General M. Nisbet. This is me, myself. I am currently the Commanding Officer of the British Forces in West Germany, and the NATO Liason. Should you register with the British forces, I would encourage you to make yourself known, introduce yourself in the briefing room and join in the reports, discussions and general comeradery which is bringing gamers together through this campaign. Win or lose, the British Army are proud of your effort, and will always have your back to keep you in the fight.

God Save the Queen