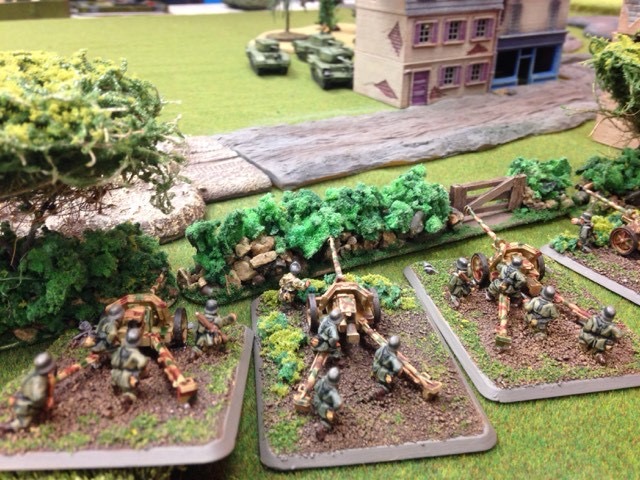 I popped out for a game one evening…

Wargaming can be a very small world.  I recently attended the Polar Bear MW event in Iceland and happened to meet Clayton Goddard (no relation).  We got talking and he kindly offered to sort out a gaming evening in Calgary while I am on holiday nearby, for me to attend and meet some of the local gamers.

The venue would be Imaginary Wars in Calgary and feature a 60pt and 100pt game with the 60pt having to come from your 100.

With the new Brit book in hand I decided to continue my exploration of Churchills with the following 100pt list.

The three Churchill troops and HQ Churchill would make my 60pt force.

It was great to see 14 players arrive for the two games including several who had travelled for two hours (not a lot by Canadian standards but a lot for the UK), plus a couple of brand new players, including one who was having his first game.

For my first game, I was paired up against Brent and his Armoured Panzergrenadier Force. He ended up attacking in Breakthrough with his second infantry platoon in reserve.  I left three Churchills off.
I was worried about the (brilliantly modelled) objective near the row of houses as, with no artillery, infantry would be hard to shift.  I also mis-deployed allowing his Paks to get 8 shots on two of my Churchills immediately destroying both (who said Pak40s are useless vs FA9!).  His infantry predictably moved into the houses.

I relocated to deny his Pak any more shots and started pumping rounds into the buildings killing a team.  Brent continued his advance into the row of buildings in-front of my objective.  His Pak40s started to move at dash speed to get shots next turn.

My other three Churchills arrived, firing on the move at the infantry who were starting to be slowly picked apart.  This went on for two turns with my Churchills weathering the storm of Pak40 shots (long range) and two panzershreks each turn.  His other infantry arrived and took cover in the crop field by my other objective.  I disengaged from the infantry in the building to MG those in the open kill killing off four stands.  Next turn they were assaulted by a platoon and HQ killing them to a man.  All that was left was to kill the remaining two stands in the building and it was game.

This game highlighted how hard it is to shift cautious infantry a building.  Had he gone to ground, it would have taken double the turns to clear them out.  At 60pt it’s very tough to create a rounded list; you have to adapt and overcome.  Brent certainly had me worried at one point and his Pak40s were gradually moving and increasing their shots. However, at long range, it’s just a bit tough to get that penetrating hit.

My next game was versus Yeagor (hopefully spelt right), and his veteran US Shermans consisting of twelve 75mm and five 76mm M4s with a small Armoured Rifle Platoon (ARP) plus mortars.  We rolled up ‘free for all’.

I recced forward, trying to dominate the centre and aiming to fix him in the right flank and push on the left.  He got the first turn and aggressively moved up, getting his ARP into the small town ready to threaten my Achilles.  He elected sensibly to stay gone to ground with his five Shermans on my right flank, sitting in the objective.  I wouldn’t engage with my Achilles on 7s.  My typhoons came in but, in typical air support fashion, missed; he also didn’t fall for the trap of using his 50cals on his GTG Shermans, too clever for that!

My AVREs failed to hit nine teams under the template on 4s, which was rather disappointing, however next turn blew five teams away, so made up for it.  Once again SA8 and FA9 kept casualties down.  I actually only lost one Churchill which was to a long range At12 shot.   We called the game at turn 5; the Shermans were close to breaking and the right objective was pretty open with a pair of Shermans facing off versus a quartet of Churchills, all with side shots.

I think I really need to get an infantry platoon into the list.  With only one template, it can be hard going to clear infantry and, while I love typhoons, they, like most air support, never seem to achieve much.  That said had they came on more often than not and I may have gone after the GTG mortars with my cannons which were holding up the left objective.  I actually think the cannon is more useful in a lot of occasions.

Thanks to everyone at the Calgary Regiment gaming for being so welcoming, and to Imaginary Wars for hosting and of course to Brent and Yeagor for being great opponents.