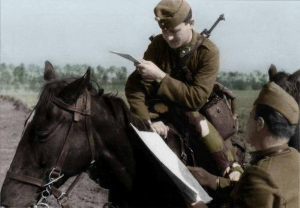 Last time out we look at the new Hungarian Steel book which brings the most favoured of all the Axis forces into the Mid War arena, this time we are looking at customising your Hungarian army using the new Command Cards.

Now, as usual, I’m not going to go over every single Command Card and analyse each and every facet. Suffice to say that ye olde faithful cards like Pure Luck, Hidden in Plain Sight, Diversionary Tactics and Cut Them Down are all included but, for me, it is those that allow you access to particular formations or applies only to the Hungarian forces are the ones we should focus on.

Whilst it is pretty standard to have access to an armoured car or recce, formation in Command Cards now I think that this one is interesting because it is so limited.

With only an HQ of 3 x Csaba and then 2 or 3 Platoons the same you have a very small, cheap formation which can slot into an existing army as a complementary second formation. Again, just for comparison, the Armoured Car Company from the Iron Cross Command Cards boasts 8 Light Troops, 3 Heavy Troops, 5cm Tank Hunters and a Panzergrenadier Platoon in its formation!

Another interesting, if limited, formation card that lets you bring a full Toldi company to the tabletop. I’m not sure if this is a much better formation than the Casba formation above. The Toldi’s have platoons of between 3 and 5 tanks and still have access to Spearhead to get your forces further forward. This does come at a cost however and the Toldi is not much more survivable than the Csaba.  However it is an interesting option for another cheap second formation for your Hungarian forces.

Sticking with the reconnaissance theme, we have up next a Motorised Recon Company. A nice blend of Rifle/MG infantry teams and either Toldi tanks or Csaba armoured cars. A flavourful inclusion that lets you squeeze in some more light armour into your formation and force. I’m not sure that the majority of the time you will consider this over the standard Motorised Rifle Company; the additional support in the standard formation is just so useful. I do love the idea of coupling this with the Motorcycles card to give you an old skool fully motorised reconnaissance unit.

This is an interesting option, giving you a full-blown Assault Pioneer force rather than just having access to one platoon in support. I think you might see a few of these spring up in Mid War Hungarian armies.

The reason for this is the Assault Platoon retains being Rifle/MG stands and gains access to two flamethrower teams over the standard Motorised Rifle Company – both being 10 stands strong. They also retain all of the same stats apart from the ability to Dig In on a 3+. This costs you one point over the Motorised Rifle Company.  If you aren’t planning on adding in the additional mortar, HMG and anti-tank rifle to the Motorised Rifle Platoons then why not have a crack at taking the fight to your opponent? You do lose access to the additional support platoons of the Motorised Rifles but for 34 points for the complete formation that gives you plenty of wiggle room to get what you need in support.

As the Huszar Squadron is already a formation within Hungarian Steel there is no need for a Command Card to give you access to them – there is however a handy boost available to keep them in an assault.

The positives to this card, aside from the 3+ Counterattack, is that it is “always-on”. By that I mean whether you are mounted or dismounted, attacking or defending it always give you that bonus. This means that your cavalry can use their speed to get up the table, dismount and then defend an objective as well as they can ploughing into an unwary opponent whilst mounted.

The downside is that it is a costly upgrade at a third of the cost of a Troop again. That’s right if you go for the full formation, all upgraded, you could instead have a full Motorised 40mm Anti-Tank Gun Platoon instead. It is a tough call. I think that upgrading a single unit might be handy but a full squadron might be a bit of a push.

Storm Over the Don

Slight misnomer in the naming convention here in that your troops are preparing to storm over the Don river, more that there is a Soviet storm brewing on the far bank!  This is a defensive card that boosts your ability for any infantry formation to Dig In.

It is a pretty inexpensive upgrade and has some very handy potential interactions. The most obvious of which is in conjunction with your Green Rifle Company. Increasing your ability to Dig In from a 5+ to a 3+ for seven out of nine units in your formation seems very handy indeed and won’t break the bank in terms of points cost.

A less obvious application is with the Huszar Squadron. The Huszars are an Infantry Formation and Huszar Troops are Infantry Units so I see no reason that this can’t apply. Obviously, you cannot Dig In whilst mounted but that Dash to get to an objective, dismounting in the following turn and then digging in for the long haul the turn after that. It might be tricky to pull off but I’m sure that it will give some players a nasty surprise when it does.

These Mid War cards came as a bit of a shock to the system compared to the Late War Command Cards, which we have frankly been spoilt with, but stand as equals amongst their peers. Access to additional, if situational, formations is nice and nothing would seem to kick the teeth out of the equilibrium set out in Hungarian Steel. As with the majority of the Mid War Command Cards, these give Hungarian commanders options and small tweaks and, as I always say, more options are better than fewer options.

Overall, another welcome addition to the Mid War mix.