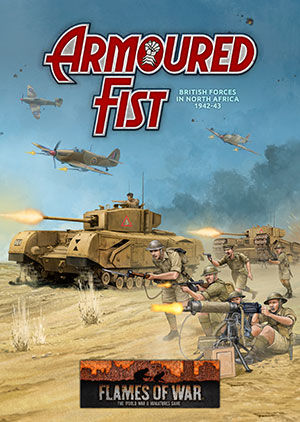 In a slight change of pace, Mark N. paints up a Churchill, roughly following the guide in the back of Armoured Fist.

I’m not the best painter in the world, I myself will admit this, but I can get things on the table that at least can look reasonable enough. With this in mind, I’m going to give a very quick run down of how I painted my Churchills in North Irish Horse colours and markings from the Kingforce box-set.

Since this is a painting tutorial (of sorts), I won’t go into the history of the unit, or even the Churchill. Luckily for you lot, I have already written a bit about that, which you can find in my other article: Undisputed King of the Desert.

Preparation and a lot of clipping

I had painted my Churchills in a day or two in preparation for an event, and so was unable to do a detailed guide at the time. Thankfully, Battlefront’s sprue/book promotion allowed me to grab an extra sprue when I bought Armoured Fist. I really just followed the painting guide in Armoured Fist itself, just with a few tweaks, but it shows it works. And so, here we are, ready to get it built and painted. Firstly, a list of the paints I use with both Vallejo Model Colour codes, and Colours of War/ Team Yankee paint names.

The Churchill sprue (and thus, model) is a lovely, sturdy piece of plastic, with nice thick parts. It comes with the option to make the Churchill I; with 2pdr and 3″ Howitzer, or the Churchill III; with 6pdr.
The front hull plate is the main feature for determining which model you go with (turrets are easily exchanged), as it needs to be glued in place, unless you get creative (or don’t mind your Chuchill III having a hull 3″ howitzer poking out).

As I already have a decent amount of Churchill IIIs, I am going to assemble, and paint this one as a Churchill I. I don’t think you really need instruction on this part, but if you are spraying, remember that a few light coats will work better than one, long, thick coat.
The same goes for brushing on the undercoat, ensure that your colour (black, in my case) is given a little water to let it get into all the recesses, and don’t be afraid to give it a first, thin coat, and then a later one, this will allow the paint to adhere better to the raw plastic.

Also, why am I doing the basecoat black, instead of one of Battlefront’s lovely sprays? Because I’m lazy, and I hate painting tracks. Having the tracks black makes them easier to paint later. As mentioned above, a couple of thin coats is better than one thick coat. Ensure you get the entire model covered, but don’t worry if some of the paint is a little thin in places, it’ll get covered up later. (Stop here, and skip past the next part if you’re painting Churchills for Late-War Soviets)

Add the camouflage over the top of the dry basecoat. I took inspiration from the pictures in Armoured Fist, and a few web articles on the Churchills in Tunisia and Italy. Wavy lines, large splotches, and a coverage of just under 50% of the model is what you should be looking for. Make sure you remember that the wheels were also camouflaged, and don’t neglect the back and front of the tank.

Give it a wash! Wash the entire model in your chosen colour of ink. I would recommend a nice middle-brown colour. Ensure that it sinks into all the recesses, but doesn’t flood details. Use a dry brush before the ink dries to move it around, away from any problem areas. A mix of flat-panel painting and drybrushing allows the detail to really pop out. The colour I used above is a 50/50 mix of Comrade Khaki Grey  and Sicily Yellow / Green Ochre, to give a warmer, deeper colour than Comrade Khaki Grey would alone.

Also, don’t worry about going over the brown camouflage too much, we’ll be going back over it again, this time mainly using the flat panel painting technique.

Finishing up / A lesson in colour matching Add decals of your chosen division. North Irish Horse was mine. And then, give the entire model a very light drybrush of Khaki / Military Khaki, focusing on the corners of the model, and the ‘curves’ around the turrets. This will bring up the colour a little more, and make the model stand out on the table. Something about scale models and needing brighter colours. There’s science somewhere there!

Last thing to do is pick out the details with your metal colour; MG tips, cables, tracks, etc,

Your Churchill is now ready to take to the table, or if you’re like me, they didn’t...