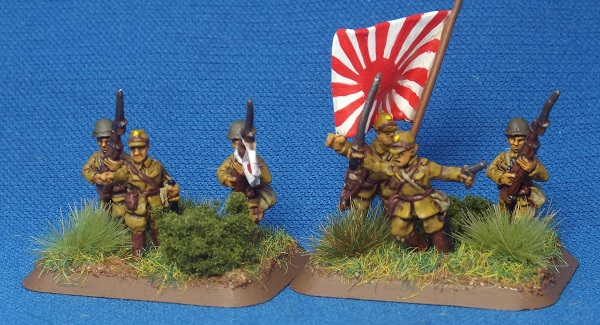 Evening chaps.  Back the for final (for now) part of my articles on starting Japanese in late war.

Last time I was painting up my guns.  Since then I have finished off the rest of the infantry using the methods listed in part 2 and part 3.

After painting all the infantry it is on to  a painting reward and it was time to finish off my 5 Zvezda Stuarts. I’m please with how the army turned out.  Some good results using some quick techniques.  Now to get them on to the battlefield.

When I first thought about doing this article I always envisaged the army list talk and then the painting guide and finishing off with a blow by blow battle report of how they got on on the table top. My hints and tips on how to get the most out of the Japanese infantry lists in late war.  Unfortunately things didn’t go to well at all during my one practice game and the 3 tournament games.  What do they say about taking a knife to a gun fight.

Out of the four games I h ad 3 resounding 1-6 defeats and one 6-1 win.  There is one main problem I ran into in each of the games which I just could not defeat.  I’ve played Brittish armoured cars, US armored rifles and a bucket of Russian infantry and there is one thing the list just couldn’t handle,  armour.  5 Stuarts on their own just isn’t enough to deal with anything from a Sherman upwards and the guns can’t help with any effective direct fire or bombardment.  Nikuhaku Teams look great on paper but take a bit of finesse to use correctly.  Also you loose a big chunk of your unit on some one shot anti tank attacks.

A good opponent will spot this and stick his armour just behind his infantry stopping you launching any assaults.   Which can also be a real killer as you get to run into his defensive fire twice in a row.  Yes, at one point I pulled a Luke Melia patented ‘F It’ maneuver and threw a full strength platoon into an assault against some dug in infantry.  Two rou

nds of defensive fire later and my platoon was down to two stands only.

I did manage one win with the list when playing Russian infantry in Dust up.  My opponent sent all of his armour to attack my objectives while leaving his infantry in defense.  This was when the army shined as I had enough smoke to cover me and when the Japanese infantry got into assault range they mana ged to wipe out the defenders.  Dodge the armour and win the game.

So I’m sorry to end this short series of articles on a downer but it turns out you can’t take an early war army to a late war games.  Funny that.  I’m not giving up on the Japanese but I do think I need to add some more of the new kit to them before they hit the late war battle field.  I’m thinking about some of the new Type 91 105mm guns or the self propelled guns.

Thanks for reading.   I hope you have found these articles helpful and that you have more success with the Japanese than I did.

Please feel free to leave any questions in the comments below

Don’t worry, the empire will strike back.  Once they get some new toys.