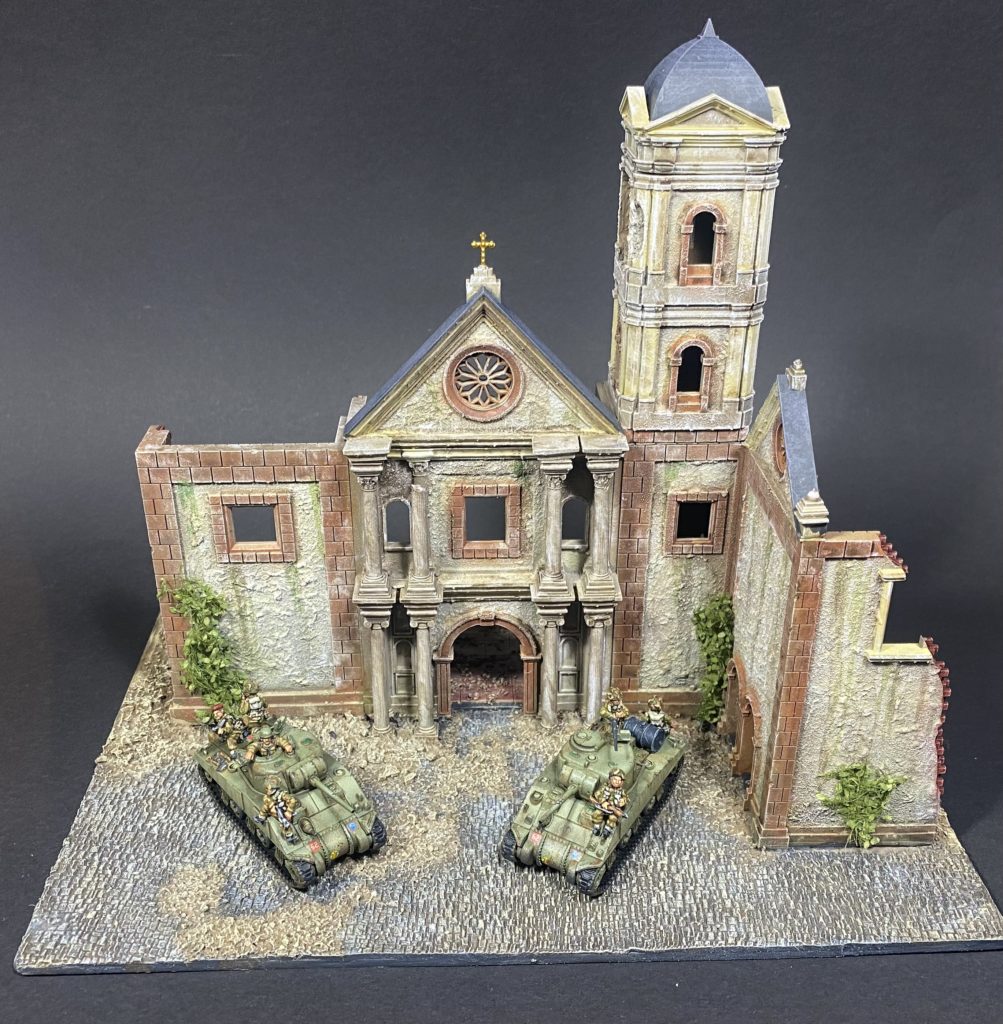 The fighting in Italy, around Monte Cassino, in 1944 have always had my special interest. The stubborn defence by the green devils from the 1st Fallschirmjager division against some of the best troops the British Commonwealth could muster. What’s not to like? But for playing games in Italy you need terrain.  If you have a 3d printer then Wow building have some truly wonderful models. In this article I will show you how I painted and based a Italian style church printed on an Elegoo Saturn.

The model is printed in 6 pieces that I glued together with superglue. Now I could have painted the model like this, but the smooth surfaces will not make for a very interesting look when finished, so I added some structure to the model using thinned down filler.

With the ground work done it time to get some paint on it. But how does churches look in italy? As usual the internet is your friend. A quick search will give you plenty of ideas on colours and weathering.

With reference photo in place, I found a collection of colours, I found looked like the ones in the photos and sprayed them with my airbrush.

I then did some weathering with some GW washes and did a light drybrush to make it all blend together. It all looked a little to uniform, so I went back and painted the upper parts with a lighter sandy colour.

I still thought it looked a little to boring, so after discussing it with my friend Petter, I tried going with a dark grey/blackish slate style roof and added some green bushes to the front of the church. One of the things, I always have in mind when painting terrain and also models, is contrast, contrast, contrast. There need to be something to catch the eye of the viewer and nothing does that like…. you guessed it, contrasts.

Now with 95% of the painting done, I moved on to the base. I cut a suitable piece of vinyl tile and marked in the location of the church. I then rolled out a piece of DAS clay and used a rolling pin from greenstuff world to make the cobblestone pattern. When that was done I then cut the clay to size and glued down the church on the base.

While the clay dried I used the time to paint the inside of the church. Here I again picked some colours with a high contrast without going completely crazy. They got the same weathering as the front and I then added some filler and rocks to the base to blend it in with the base.

Once the clay had dried I added a variety of rocks(cork) to the plaza in front of the church to give some more battlefield feel.

The rocks was glued in place with two coats of very thinned down PVA glue. Now all that was left was to paint the cobblestones with a selection of different greys and the rocks with nuances of brown. I then added a final dry brush with white, this worked as the final highlight and tied the whole thing together.

As always, thanks for reading this far and I hope you saw something you can use in your own hobby projects for 15mm terrain for Flames of War and Team Yankee. Happy hobbing.