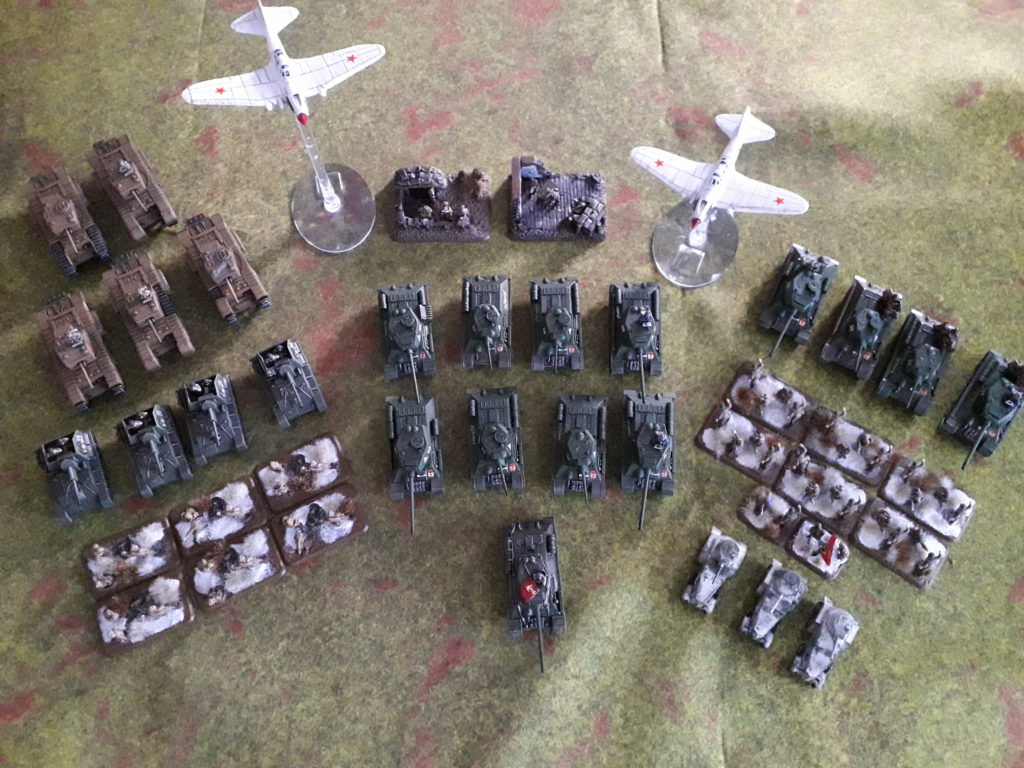 Today Martin talks about how he has prepared for Corivalry 2020, taking place this weekend.

Corivalry is a Flames of War tournament being held at our sponsor Battlefield Hobbies here in the UK over the weekend of February 8 and 9th. It is an open event so anything could turn up and it allows blue on blue match ups. The period is late war 100 points but you are allowed to enter two lists with a 40 point variation in them. Another added twist for this event is that all missions are preselected for the terrain on the table to accomodate this it uses a fixed rating system to determine attackers and defenders with a dice off in the event of equal ratings.

This is the first time I have attended this event despite it having been running for many years and, with the scenario structure, I am a bit more apprehensive about how to structure my list than I might have been if using battle plans as they would enable me to avoid scenarios with Deep Reserves where as at Corivalry I will be much more subject to the table draw. That said, I’m really looking forward to it as I rarely get enough timeoff to play in multi-day events.

This article is designed to help those with limited or no tournament experience get their force ready for facing the unknowns of competative play.

Where did I start

For me this journey began last summer with the Hobby League and collecting and painting up a new Soviet Tank army. I built and collected a wide range units for the extravaganza with no really concise force design in mind but I did build all of the units with their optional upgrade teams. Altogether I had roughly 200 points of units but the force diagram does not allow me to field all of them at once, i.e. I can’t field my SU-85 tank hunters and SU-122 self propelled guns in the same force so I effectively had a 150 point list maximum, more than enough for Corivalry

I started out by working out which formation I wanted to use. Looking at my models I discovered I had several formation choices; the blunt instrument of a Guards Churchill Tank Battalion, a massed lend lease Valentine equipped T-34 Battalion or a Hero T-34 Battalion, potentially fully equipped with the latest model T-34’s. Interestingly all these equated to builds of between 60 and 70 points for the numbers of teams I could put in to each.

As the Hero T-34 had a formation size with six core units, larger than the four or five the others had, this determined my first action; I would assemble my force based on the T-34 Hero Battalion diagram.

I have 12 Valentine tanks so theoretically I could field a force with two Hero T-34 Battalions in it if I used just a single platoon of T-34’s with a pair of platoons of Valentines in each formation. However, as the Hero Valentine platoon only has three tanks in it, and my experience of three tank platoons in mid war was rather disastrous, I quickly dropped this idea and went with a single Formation force, giving me the following model options to consider:

This gave me plenty of attacking options and a bit of light artillery support and some infantry I could use defensively if needed. I would be a bit short against a heavily armoured opponent where my AT9 76mm guns would struggle but overall I liked the general look of the force.

So thinking about this for reinforcing my attacking potential I decided I would need something more to keep enemy heavy tanks at bay so I added a unit of 3x SU-85 tank hunters with their good skill and better “Hit on” rating, these tank hunters would provide overwatch defence to my tank units flanks.
Next up was some more artillery.  Sticking with my attacking theme I added a unit of 5x SU-76 self propelled guns, these would also add to my medium AT threat against lighter armoured vehicles. Finally I added a Red Airforce Sturmovik assault flight to threaten any hiding artillery or anti-tanks guns.

That gave me a core and the first “swap” portion to test out.

Offensive Exercises – getting in the practice

Overall I managed five games against varying types of builds with my two lists and after each I sat and wrote down a few notes about what had worked and importantly what didn’t work so well.

After the first game it was clear that having  just 3 SU-85’s wasn’t enough, either I needed more of them or a rethink.

For just 6pts I could upgrade the HQ and last company’s T-34s to have 85mm guns giving me potentially six more AT 12 shots per turn which was cheaper than adding one more SU-85.

After a bit more thinking the tank destroyers got dropped from my list. I also dropped the flame thrower team from my tank riding SMG platoon as I was looking to launch a tank-bourne assault, he really wasn’t getting used.
I also made another important change in dropping a SU-76 and adding in three more tubes of mortars. I did this specifically to refocus the mortar unit as my main artillery barrage allowing me to use the SU-76’s a bit more flexibly. Rerolls to hit on my principal bombardment now came from the mortars who have no other use. An added benefit was this made my formation platoon more resilient to losses – not a bad idea either! All this left me with 18 points to spend on more units.

Looking at my models I realised I could take a full Churchill Heavy tank platoon with their high end armour, powerful assault threat and reasonable AT10 guns as well as a unit of BA-10’s to provide a much needed spearhead which could compensate for the Churchills lake of speed and fitted with my attacking theme for this list. Plus I liked that this now mimicked my entire Hobby League collection.

Overall, I had improved my resilience to breaking, added more close combat potential and even improved my anti tank threat overall. So another couple of games got played and yes this was a solid force to use with plenty of threats even to a Tiger Company thanks to its distributed AT12 threats making it hard for them to take out all my higher AT assets.

With my principal list sorted I now turned my attention to the swap and here I was looking to offset the fact my tanks could end up defending with reserves or, worse still Deep Reserves, against other tanks formations. With regards to reserves the most expensive platoon I have is 16 points so I have to put either  two tank platoons and the SMG tank riders in reserve, or three tank platoons, which leaves me a reasonable enough force in the event of standard Reserves scenarios but sees me loosing up to three more platoons in a Deep Reserves scenario – not good! I would start with just the Mortars, SMG’s and single Tank platoon!

My formation doesn’t really have many options to swap without weakening it as a whole so I immediately ignored changing this in any way. With my 65/35 points split the solution was to reconfigure my support platoons from mobile ones to more static ones, not that anything in the Soviet force is ever truely a static asset; even a Soviet heavy artillery gun can be pretty nimble when needed!

I want to retain a second template attack so I started with a swap of the SU-76’s for Zis-3 guns, giving up mobility for more points to spend. I am looking at this as a more defensive list so I wanted something to ambush with so I added a Heavy Tank Killer unit of 57mm Zis-2 guns primarily in place of the planes, with AT11 they aren’t the  greatest vs heavy tanks but are the best option available. Finally the breakthrough tanks and spearhead platoon of BA-10’s were replaced with a Hero Motor Rifle Platoon, providing more ground holding infantry. I also added the Molotov Cocktails Command Card  to boost my strength if facing a mechanised assault. Coupled with SMG’s and Mortars from my Formation this part of my force should form a solid firebase in a defensive role around which my tankers can counter attack in true Soviet style.

The Hero Motor Rifles are without doubt the best all around Soviet infantry of the late war period at present. They can hold ground thanks to decent platoon sizes are hard to assault with infantry always being RoF 2 and hitting in assault on a 2+ is more than handy in the attack and is one of the reasons to take the Molotov Cocktail card if you field them.  I see this platoon as the Soviet counter to American and German armoured infantry platoons. The optional Maxims will stop infantry getting too close and the PTRD AT rifles whilst not as good as other AT infantry weapons vs battle tanks still threatens light armoured vehicles such as halftracks, armoured cars and universal carriers – not to mention all those pesky armoured artillery units out there you can go hassle with the PTRD teams, they can even stop a Sherman tank assault on a very lucky day!.

For my build I wanted to add at least one maxim HMG and PTRD team. After several attempts to configure this unit for the points (12) I wanted to allocate, I ended up with a very interesting result. I have a “small” platoon (7 teams + Kommissar) with 2 Maxim HMG’s and 2 PTRD teams.  It has more teams (12) than buying the larger platoon (11) for the same cost. It has more shooting 36 or 24 dice when pinned vs 22 dice, plus 8/4 shots have AT5, FP5+ the trade off being I have 3 less teams who can launch an assault. For use in a competitive environment where points efficiency is important this is most definitely a good build solution for a single support platoon for any Soviet player.

Hopefully this has given you a few ideas about what it takes if you want to go play at a tournament without collecting a tournament army as such. Play a few games, asses what works, take some time to think about your list construction and how you can use units together to act as a force multipliers and how to asses the individual build of a unit. I’l be posting updates on my experience over the weekend on our Facebook page.