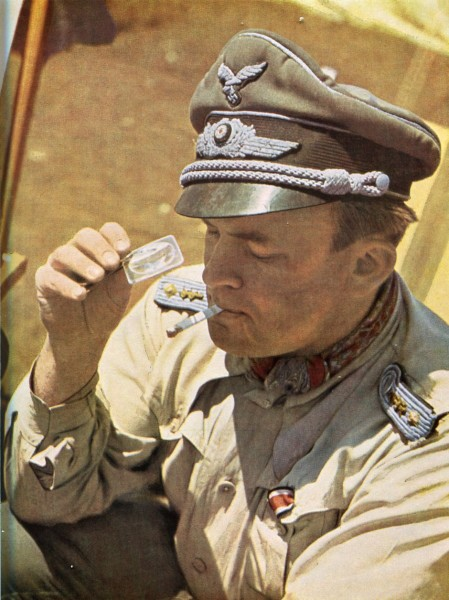 Today, Duncan looks at the new Command Cards that have been released for the V4 Germans lists in Afrika Korps.

Hi, Duncan here and today I’m looking at the new German Command Cards. I know this is a subject of much debate, discussion and – in some cases – division even here at Breakthrough Assault Towers. This is my take on the cards so please bear with me as we open Pandora’s Box and see what the future holds for your DAK. The Elephant in the… well… in the dead pile

Let me first address the ‘Elefant’ in the room [It’s mid war so technically it should be the Ferdinand in the room – Lee] and the largest gripe I’ve seen from people is that previously all this information was available in your Source Book, for whatever period you were playing.  Yes that was the case, however  playing MW with just the new Afrika Korps and Desert Rats books is fine, adding in the Command Cards (should be) fine. They are not mutually exclusive states of play and I can see myself playing with or without them and even omitting some from casual games just because I like variety.

I’m not a massive tournament goer and I think that how the UK and Global communities structures it’s competitive play is topic for another day so I won’t delve to deeply into that mire in these post.

So what are the Command Cards?

They are fairly self-explanatory and each card has an effect on the points cost of the formation, unit or command team it is attached to – it’s important to note that this is not always an increase!

Rather than spoil the fun of the all the cards – you didn’t think I was just going to print them all here did you J – I’m going to look at my favourites from each of those 3 sections.

Raising the Ante – Changing the Formation

So the first section we are going to look at are the cards that modify the Formations that are available to you outside of the Panzer III, Panzer IV and Infantry companies in Afrika Korps. I think that it is universally acknowledged that the way in which Recce now operates in V4 is radically different than in V3 – again a topic for another time – but I think that this combat card gives them some new life in the light of V4. I think that MW Recce offers the best value as the points cost have been realigned and this formation makes the most of that cheapness.

Normally being a support platoon Recce doesn’t matters in terms of Combat Platoons for moral so can end up being a bit of a throw away unit – with the formation you can bring a cheap 2nd formation to your force without breaking out the calculator. At the minimum requirement for the formation you are looking at 7pts plus the cost of accessing the formation – that is pretty darn cheap if you ask me. Is it not worth that to get Hans Von Luck swanning around the enemies back lines being a total pain?

I’m not sure that this will light the fires under a competitive player but that cheap 2nd or even 3rd formation could prove tactically very handy or even as a main formation with loads of cheap combat platoons and bags of nice support options.  It may be a very viable way to get those 2 Tigers onto the table. Essentially this is an upgrade card for a German Infantry company but I’m going to cover it in formations as this is where I feel it fits best.

Another tweak to the forces in Afrika Korps this time not a new formation but a formation composition – the return of the able pioneer platoon. This is slightly different in its composition from V3: gone are the supply trucks and additional wire or minefields and instead we get some interesting new skills and abilities.

Crossing minefields on a 2+ is a bit situational but does give you some options, but I really like the dig in on a 2+… oh yes I do! I see it being a fantastic way to get safely across the battlefield as follows:

It’s not a quick advance but can help you negotiate open areas safely.

I miss the uniqueness of the former Pioneer list but I do appreciate that there is now a way to add some diversity to a DAK infantry force and some rules that reflect that uniqueness.

Next we’re going to look at the options available to enhance your German units. Oh Forward Scouts, how I wish you were more than just for Panzer IIs! I really like this card for Panzer IIs (I wish some other units could take it but I understand why they can’t) it’s a simple upgrade that makes the Panzer IIs a cheeky little unit. Being already Careful, adding a the Gone to Ground additional modifier to being shot when moving at means your opponent has to decide where to dedicate the resources to killing your annoying Panzer IIs or potential get out flanked by them.

YES! German 25pdrs are back!

Not sure I need to say anything on this card: it’s thematic of the theatre, makes 10.5cm better (IMHO) and gives some variety in the artillery slot for Germans. Should the 25pdrs have been in the Afrika Korps book? Maybe. Have they made picking artillery support harder in a DAK list? Absolutely.

My initial thought was Lorraine Schleppers were the far better choice MW for the Germans – now I’m not convinced they are. I think that 10.5cm guns will now not be seen at all, which is a bit of a shame (but no different to the last edition), and 25pdrs will definitely need some serious play testing to see how good they are.  [For me its the ROF 2 that makes them amazing – Mark] Simple and effective; Diversionary Tactics means that in a mission where your opponent can start with a ranged in marker on the head of one of your units you should be able to minimise the effectiveness of this and make them have to roll some dice to Range In. I think that this is a perfect way to screw with your opponents game plan right from the get go and with the British propensity for including 25pdrs in their own force it should get some decent game play.

Ace up the sleeve – adding a Warrior

Next we’re going to look at the options available to alter your formation commander. It’s worth noting that all Warriors are Limited by their nature and only one of each card can be included in your force.

The Desert Fox rides again but apparently not in Greif or Mammuts but instead just replacing your formation HQ tank or stand.

The main bonus that this card gives you is an enhancement to ALL your formation commanders Command Leadership range – which is nice but not really world beating and getting the most bang for your buck means taking multiple formations.

The other “bonus” is that if you win, you win bigger, and if you lose… well the converse is true. In a tournament setting I can see this being a way to really push for the top spots. In the new 8-1 system it means that you can lose 2 units and still walk away with the maximum 8 points and if you lose only one on the way to victory you could be quids in. Losing a point if you lose is a bit meh as if you are a serious competitive player do you really care if you only get 2 points instead of 3? I don’t think I would.

I think Rommel has the potential for abuse in a competitive environment and doesn’t offer enough in a casual game to be worth taking compared to the other options and as for no Mammut , well that’s disappointing. In terms of V3, Josef Rettemeier was my favourite Warrior – possibly overall, but definitely in MW, just because he was disproportionately annoying to my regular opponents. Conducting a Storm Trooper move on a 2+ and being able to re-roll shooting attacks with his long 5cm gun really made a difference to damage output. He also allowed you to re-roll one die to receive reserves.

In his new incarnation Rettemeier… does pretty much the same thing – losing only the ability to re-roll for reserves –  but instead of just Rettemeier, and the unit he has joined, moving  on a 2+ it’s now any Tank Unit whose Unit Leader is within 6” and Line of Sight. I will have to check that the Formation Commander is in line of himself to get this advantage but on paper this is extremely handy for increasing the flexibility of your tank forces as well as adding some consistent hitting power to your up-gunned Formation Commander.

Slightly at odds with the model I can’t see why you can’t have Rettemeier commanding a formation from the cupola of a Panzer IV 7.5cm Long tank as the card stands. This puts a far whack of points in a single model but does mean that you are re-rolling it’s two AT10 shots out to 32”. Pretty impressive.

I will certainly dusting off the old Rettemeier Panzer III Late J model and badgering my British opponents with him in the very near future.

So that concludes our whistle stop tour of some of the new Command Cards that will be gracing the DAK forces at a table top near you soon. I feel that they definitely bring something to the game – sometimes good, sometimes not so good – but they offer the one thing that MW needs right now and that is some variety.

I’d like to think that they offer some options for competitive play too, maybe some tournaments will be hesitant to allow them – but we are in a brave new world now and the only way really to test these new additions is in the crucible of combat.

Until next time – snap up the Rettemeier figure… you’ll be needing him!