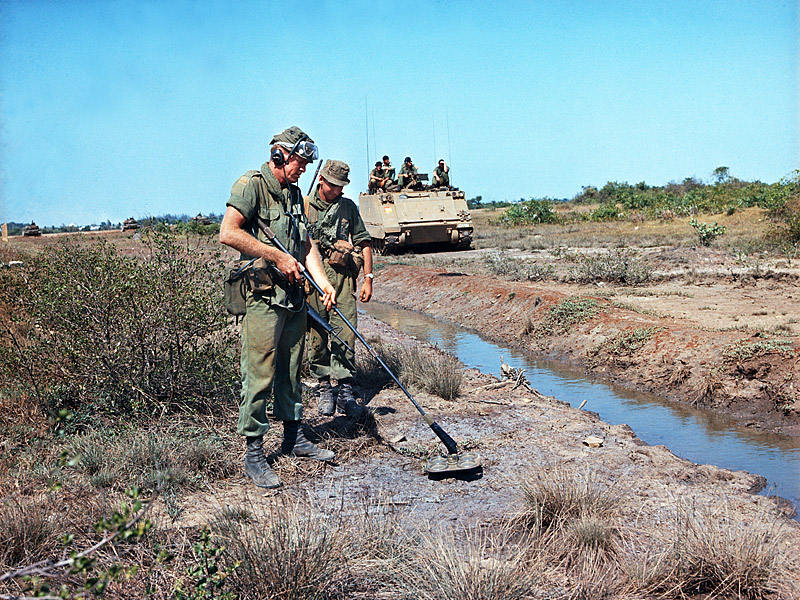 Today, Duncan looks at his take on the ANZAC Troops from the new Flames of War ‘Nam book.

Hi Duncan here and today I’m going to look at the ANZAC forces from the new shiny Vietnam release.

Having not previously played the Flames of War ‘Nam conflict I’m going to look at growing a force up to 100pts to maybe take part in an escalation campaign or just breakdown the overburden of collecting and painting a mass of troops; remember, painted figures perform better on the table top… FACT!

Around 60,000 Australian troops and nearly 4,000 New Zealanders served in the Vietnam conflict between 1965 and 1971/72 so their presence and contribution cannot be understated. The cultural view of the Vietnam conflict has been popularised since the 1970s as a helicopter-borne struggle against an unyielding and seemingly endless Charlie. Whilst I do like that aesthetic I really wanted something a little different.

Looking at the ‘Nam ANZAC lists something cool caught my eye; that something was the ability for the Australians to take a single Centurion tank attached to each rifle platoon! Pondering this for a while I wondered if doing a M113-bourne force might be interesting and so I set about cobbling together a force to represent a road sweep, search or destroy, or a relief force for a besieged firebase.

As described above I looked at breaking down my 100pts into sections that would allow me to build, paint and play with an increasing amount of troops as I went along. (NB I’m not sure that 100pts will be the army size of choice but if it isn’t hopefully that will give me flexibility in the force I am trying to portray.) The first 50pts of my list is more or less universally infantry and could operate as an isolated fire base or as a small patrol with armoured support.  The Skyraider gives some capacity to reach out and touch someone, even if there are only 2 of them, and the Medic Team will be extremely useful keeping those big infantry squads at full strength using the Triage ability to move some of those wound markers off front line platoons. The next 25pts is all about mobility:

Thematically this additional 25pts is the Aussies moving out of their Fire base and conducting a long range patrol or a “seek and destroy” style mission. The M113 is excellent workhorse for the infantry and gives them a solid base of mobile small arms fire. The short infantry platoon from the first section jumps in the Huey Aviation platoon now and will act as either a mobile reserve or as a scouting unit allowing me to get them anywhere on the board. The Medevac is in there as a) it’s an iconic image of the Vietnam War and b) in game terms will again help me to manage wounded counters as an when they appear.

In terms of heavy firepower the M113 FSV give some much needed high firepower at 2+ for digging out dug in infantry, with the Beehive round providing some intense anti-personnel capabilities, especially on the move.

Mentally I have this picture of a Centurion leading an M113 column with another Centurion securing the rear as the ranging scouts in their Hueys provide some eyes in the sky for the footsloggers. I think that this force provides all of that story and, surprisingly for me, I think deliver a strong in game force to boot.

The Battle Points mechanic means that even if my hard hitting Centurions are destroyed they are only worth 1 Battle Point each so I can lead the fore with them but I will have to be very careful with the Huey mounted scouts as if I’m not careful that is 4 Battle Points flying around that could be easy pickings for a canny opponent. Whilst this will not determine the winner or loser in friendly games in a competitive setting it is well worth taking note of.

Thinking of scenarios, those with ‘Reserves’ will mean that at 75pts – 45pts will start on the table which means that I can comfortably get the 2 big platoons with attached Centurions all mounted in M113s and still have some space to ticker around with other bits so I’m very happy with that.

I think that this is a flavourful alternative to running traditional US forces in the Vietnam theatre of operations and gives you a staggered way to build on and up to get you playing games as quickly as possible. It has real hitting power when needed but then a fair amount of quality infantry to back it up with too.

If I was going expand this force past 75pts (not sure that I would though – I feel like 75pts is a nice size for a game) I think I would look to American or ARVN as Allied Platoons to give myself some different modelling and painting opportunities.

So there we have it: G’day Vietnam.