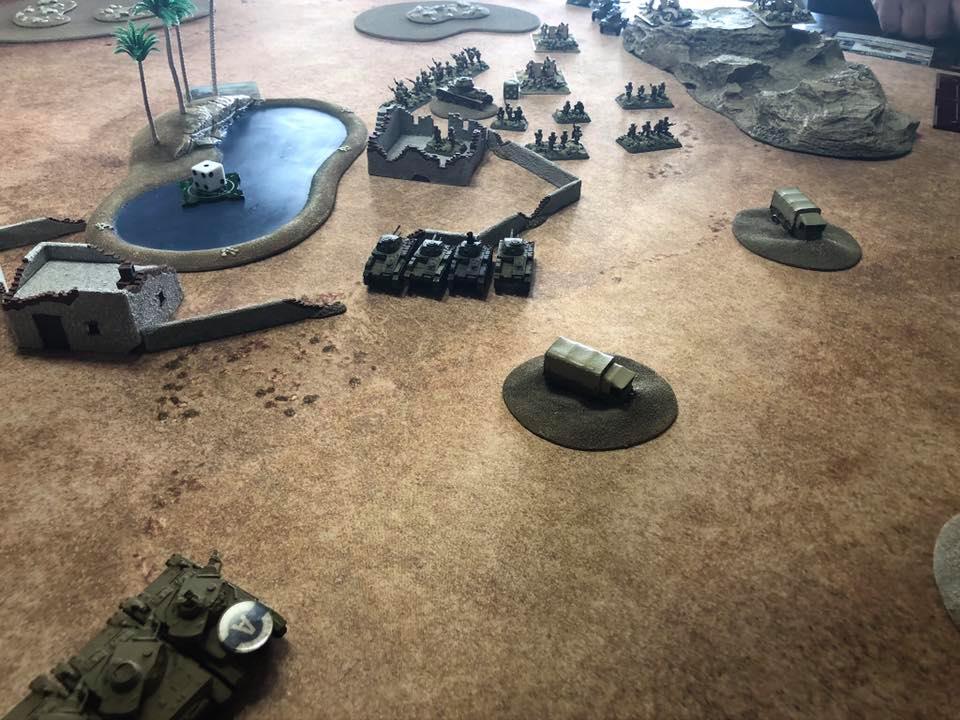 News from the front: The Battle of Gazala has started!

While I know quite a few games have been played, reports are still coming in and so far we have five officially submitted.  First off, to everyone who has submitted so far, it has been great seeing you all join in.

Let’s look at how the campaign is progressing:

There has been four battles for C2 into C4, seeing three German and one British victory.  Thanks to Brian Reid and his Son Noah as well as Jens.  Here we have a report from Chris Gau.

Flash…While rushing to the aid of the 3d Indian Motor BDE elements of the first and second Squadrons 3RTR collided with the advance elements of Rommel’s 15th Pz Div.

Seup: The British deployed their light tank units consisting of a Troop of Honeys, and a troop of Crusaders behind a hill on their right.  They were over-watched by a platoon of six Bofors AA guns.  Behind them a platoon of Indian Motor troops was poised to dash to the north a seize some key terrain.  On the British left they deployed a battery of 25 pdrs on a hill overlooking a Rifle platoon dug in behind some old buildings.

The Germans deployed the 10.5 cm guns and the infantry platoon in the rear.  On their right they placed the platoon of PZ IIs whose advance was supported by indirect fire from a Pz IV platoon.  The main attack would fall on the Germans left flank and would consist of a platoon of three uparmoured Pz IIIs, and the Hqs platoon of two Pz III Gs.  The firestorm Pz III platoon was in flanking reserve.

On the Germans first turn they received no air support, which would be the theme for the entire battle.  On the right the PZ IIs moved forward, shot at the defending infantry and killed no targets. The Pz IVs ranged in on the 25 pdr battery and pinned the guns, but did not kill any.  On the left the two Pz III platoons moved behind the hill the the light British tanks were hiding behind.  The 10.5 cm battery ranged in on the AA platoon and pinned them.

Turn one for the British saw the 25pdrs, and the rifle platoon fail to rally, but the AA battery succeeded.  The RAF failed to arrive, but  W.W. Feldman’s lost Troop of Grants saw the dust raised by the PZ II assault and they worked to the flank of the scout tanks and fired, eliminating three of them.

On the German’s turn two they again failed to get air support.  The remaining scout tank lost heart and fled.  The two platoons of Pz IIIs crested the hill and fired, destroying one Crusader and bailing another.  The Pz IV platoon sought cover from the Grant Troop behind a hill.

On the British turn two the Crusader failed to remount, and they skedaddled.  The RAF arrived, as did a troop of Grants from 3RTR.  The Honey troop flanked the attacking German tanks.  The Grants missed with main gun fire, and all of the 37mm rounds from front and flank bounced off of the new thick-skinned German tanks.  On the German right the Grant platoon crested the hill, and engaged the German infantry and tanks, killing one Pz IV.  The Hurricanes swooped in and marked down the remaining two Pz IVs.

More bad news for the Germans on turn three as the Luftwaffe again failed to arrive.  The German PzII units fired at the Honey troop, destroying one vehicle and disabling another.  The order for the tanks on the hill to reverse off of the crest was missed, and they remained in place.  The artillery ranged in on the rifle platoon, but there were no casualties.

The final half turn of the game saw yet another troop of Grants arrive.  The bailed Honey remounted, but the 25 pdrs again failed to rally.  The combined fire from both troops of Grants eliminated the uparmoured Pz IIIs.  The Honeys claimed the 2IC’s Pz III, and bailed out the 1IC.

On the German turn four the German 1IC failed to remount, and failed to pass a re-rolled last stand test causing the company to break.  The British had won a resounding 8-1 victory over their German Opponent.

As well as this battle Jens had a great game claiming a 8:1 victory for the Axis

Robert Jones has also produced a great video Batrep of their 8:1 Axis game, check it out here.  His opponent Tom produced a cool narrative write up as well:

As a part Generalalfeldmarshall Erwin Rommel’s Operation Venice, the 21st Panzer Division has been tasked to lead the encirclement of the Gazala line South East of Bir Hakiem. The majority of the division avoided strong-point defences however one such defence held by an Indian Brigade had to be overcome to secure supply lines for the division’s further advances. Major General Georg von Bismarck has tasked the pioneers of the 104th Schützen Regiment to destroy this strongpoint which centered on a small village and road link.

My force consisted of a strengthened pioneer company with artillery and armour support. Additional armour and air assets were made available within this sector by Rommel himself. Furthermore an Italian rifle platoon was in the area to assist.

Phase 1- Initial advance: I ordered the pioneers to advance towards the minefields in a loose formation to minimise incoming artillery bombardments. German artillery had success in their initial bombards against exposed enemy infantry positions and deterring counter attacks. I kept the Italians back with panzers cautiously taking cover behind tank wrecks from a previous battle.

Phase 2 – Preparing the attack: Through good fortune casualties from enemy fire was light enabling the pioneers to disarm the minefields. I ordered the panzers and Italians onward towards the forward objective making use of stone walls for cover with a smoke barrage giving additional cover to the advance. The nature of my attack and bombardments kept enemy infantry away from the forward objective.

Phase 3 – Taking the objective: The enemy began to concentrate AT assets (6pdrs , Grants and reinforcing Shermans) to engage my panzers, again thankfully, with minimal casualties. The RAF made their present felt with constant harassment. As the smoke cleared I ordered direct attacks with panzers and infantry; the infantry assaulting 6pdrs and panzers assaulting the most forward unit of infantry. Leutnants Stiener and Wiemer both led bold actions (beyond the call of duty), destroying the enemy and holding the forward objective, for which I can commend the Iron Cross. Other units were brought into position to support against the British counter.

Phase 4 – Repelling the enemy & holding the OBJ:As expected British and Indian units were brought forward to imitate a desperate counter with light MG carriers and Grants heading the attack. Artillery bombardments prevented a fully coordinated counter attack. Despite the powerful armaments of the enemy panzers they could not find their mark. This counter attack left many of their men and panzers exposed which I took full advantage, repulsing the counter as quickly as it came. The objective was taken and the enemy began to withdraw.

Conclusion & Casualties: I can report I achieved the stated objectives; the enemy strong point was cleared. Casualties were minimal and spread across the force. No single platoon succumbed to enemy fire. 8:1 – Hauptamn Dudlehoff – AAR 26th May 1942

On the other flank the British launched an offensive from A3 into A2.  Brian Reid had this report vs his son, Noah.

I fielded a full Honey squadron, and also a South African rifle company. It included three full rifle platoons, four mortars, four HMGs, four anti-tank guns, and twelve Universal carriers. In support, I had a true gun line with TWELVE(!) 25-pounders, and a Honey OP.  I had to leave the whole Honey squadron in reserve, and a platoon of infantry and a Carrier patrol.

British Turn 1: I placed a smoke bombardment in front of the Panzergrenadier platoon to cover my universal carriers carrying two infantry platoons.

German Turn 1: Noah blitzed the Panzer IIs forward to kill one carrier and bail out another. Three infantry stands died in the onslaught.

British Turn 2: I assaulted with the first infantry platoon and was beat back with heavy casualties. The Germans remained pinned under bombardment, and I moved the second rifle platoon into position to assault on Turn 3. The first Honeys arrived from  reserves and traded shots with the Panzer III HQ.

German Turn 2: The German Panzers killed a Honey and bailed out another in my HQ unit. The infantry remained pinned.

British Turn 3: I bombarded the German infantry and tanks without effect, and launched an assault with the platoon and a half remaining on the table.

The first assault by the red platoon was turned back by 7 hits, but I lost only two stands. The two stand Blue platoon launched their assault, but this time the Germans only landed four hits. One stand failed his saves, so the lone platoon leader contacted the enemy and hit his target. The Germans failed their counterattack roll, and backed away 6 inches. This put them outside the contesting range of the objective, and so the British won in the top half of Turn 3. The only unit wiped out by the Germans was a Universal Carrier patrol, so the British won this battle 8-1.

The Italians fared better fighting B1 into B3

The Italians found a gap in the American defensive lines, pushed into the left flank with tanks and devastated a Crusader platoon and a platoon of armoured rifles there. The Bersaglieri pushed up the centre to take up a position near the first objective.

The remaining US armoured rifles moved in to defend the objectives in anticipation of the arrival of the paracadutisti reserves, while the US paras moved onto the opposite quarter and began pounding Italian artillery and the Basaglieri. However, believing the Bersaglieri to be better equipped than they were, the US paras did not move in to assault the Italians in the centre.

Meanwhile Paracadutisti reserves arrived on the flank with AT and HMGs. Together with Italian tanks, they laid down withering fire on the Americans holding the objectives.

The two forces settled into a back and forth, but as the Bersaglieri, suffering heavy losses, managed to hold off the American Paras, by turn 6 the Italian paracadutisti held one of the objectives unopposed.

Score 8-1 for the Italians.

Its all to play for…

So far the Germans are pushing strongly on their right flank but the Italians are mixed bag on the left.  There is still plenty of time to go and everything can change.  Remember the details of the battles you can play are here.  Results to be emailed to breakthrough.assault.blog@gmail.com