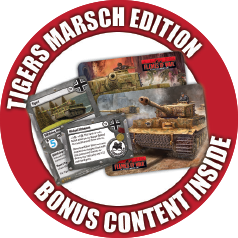 From Flames to Tanks and Back Again

Tanks was launched in the Summer of 2016 to much fanfare. It was easy to see why the game was an instant hit with the players, both Flames of War veterans, and newcomers looking for a quick and easy skirmish game to pass a lunchtime over.
With a very desirable starter set, coming in at RRP £18 ($25),  and containing three tanks and all the bits and pieces you need to get on the table and start a game straight out of the box, Tanks  started off strong.

Normally, I’d go through the Tanks starter and discuss every aspect of it. But, the purpose of this article is to tie Tanks back towards the main Flames of War game. So, let’s get started.

The starter contained a stat card for every plastic tank kit which Battlefront produced at the time. From StuGs to Pershings, this meant that players with large tank armies from Flames of War had plenty of scope to use their existing models for the new game. Even I used a few resin Cromwells during the first Organised Play session of the season.

Eventually new models were added to the line, with releases coinciding with the box set release for Flames of War. This leads onto a common gripe from existing Flames of War players about the game: ‘I don’t want to buy one model just to get the cards!’. I have sympathy for these players, many of whom have probably spent the best part of £1000 (conservative estimate here) on tanks over the years, and don’t want to buy more, which may even go unused. There were products appearing in online stores branded ‘Card Pack’, and was assumed to be a deck of cards containing crew, equipment and the like. However, it is thought that GF9 pulled the plug on this idea after realising that the product would be outdated after a mere three months on the market, with the speed at which new models were being released. For now, all existing players can do is get their hands on ‘unofficial’ cards and print them off themselves (which I do not condone), or trade with players who have doubles, triples or more.

Why is that piece here?

When new models are released, it is common, and mildly amusing, to see on the Tanks Facebook group posts from Tanks players asking about ‘strange’ and ‘unused’ pieces for some of the models. This was particularly evident with the release of the ‘Puma’ kit for tanks.

The Puma kit contains parts to construct four different variants of the 234 Panzerspäh model. However, only two of these are used in the Tanks game. The 234/2 Puma is the first of these and the box image for the model, the other being the 234/4 ‘PaK-wagen’. This left a few players scratching their head with the inclusion of a short-barrelled 2cm gun, and a stub 5cm gun. These were for the construction of the 234/1 and 234/3, both of which are available for use in German Flames of War forces. The reason for not including these in Tanks is simple: they would either not be effective enough (3 attack dice for the 2cm), or simply not interesting enough.

Whilst the comments about the Puma kit were by far the most obvious; some of the other plastic kits contain pieces for Flames of War, that other players may have missed.

Naturally, the inclusion of these parts are essential to create models for the main Flames of War game, and Tanks players might consider their use just to mark out their models as something a little different.

Battlefront heralded the arrival of the plastic Tiger kit in an excellent way; by the release of a ‘Special Edition’, including crew, stat and equipment cards for Tanks, and some limited edition objective markers for Flames of War.

This box was definitely angled towards existing Flames of War players looking to become involved in Tanks, although perhaps the other way is true. From what I’ve seen of most people’s Tanks collections, they are all well on their way to creating a usable force.
Five Tigers are way more than you will ever need for a game of Tanks, with each one weighing in at a hefty 33pts, before upgrades. However, turn those points into Flames of War points, and you have at your disposal 1085pts of Confident Veteran Tigers, a solid start to a Schwere Panzerkompanie.

Some see this as a cynical attempt to steer players towards the base game from Tanks, whilst others see it as an excellent idea for enticing Flames players into Tanks through small purchases. Whatever the reason, the Special Edition Tiger box is a good one, and sadly, unless you can find one, out of print.

Back to comments from Facebook, and another one that pops up occasionally is: ‘Anyone got stats for [insert Anti-tank gun/infantry here]?’. This usually gets a reply along the lines of; ‘This is a tanks game’, or even better ‘Play Flames of War‘. It’s easy to see why people would like the inclusion of non-tanks models in the game, due to the simplicity and speed of the game over the more time consuming Flames of War. However, I would have to agree for the most part with the comments about either playing Flames or not including such things in Tanks.

GF9 has included units that are not Tanks in their OP kits, specifically the first OP kit: Normandy Beaches, which included trench lines and bunkers for players to use. My own group was not a fan of these and they saw little use throughout the day, but no doubt other players could take inspiration from this and introduce their own house-rules and units for players to use.

Wrapping up and crossing over

In conclusion, Tanks and Flames of War can be enjoyed as their own entities, but should you be so inclined as to hop the fence from one to the other, the no doubt you should find it fairly easy to. Easier for Flames players to drop the infantry and guns and roll up the tanks. While Tanks players have a number of options at their disposal.

I’ll be back with more on Tanks at a later stage. With the game getting as popular as it is, it would be remiss of me not to. So for now, have a good day.