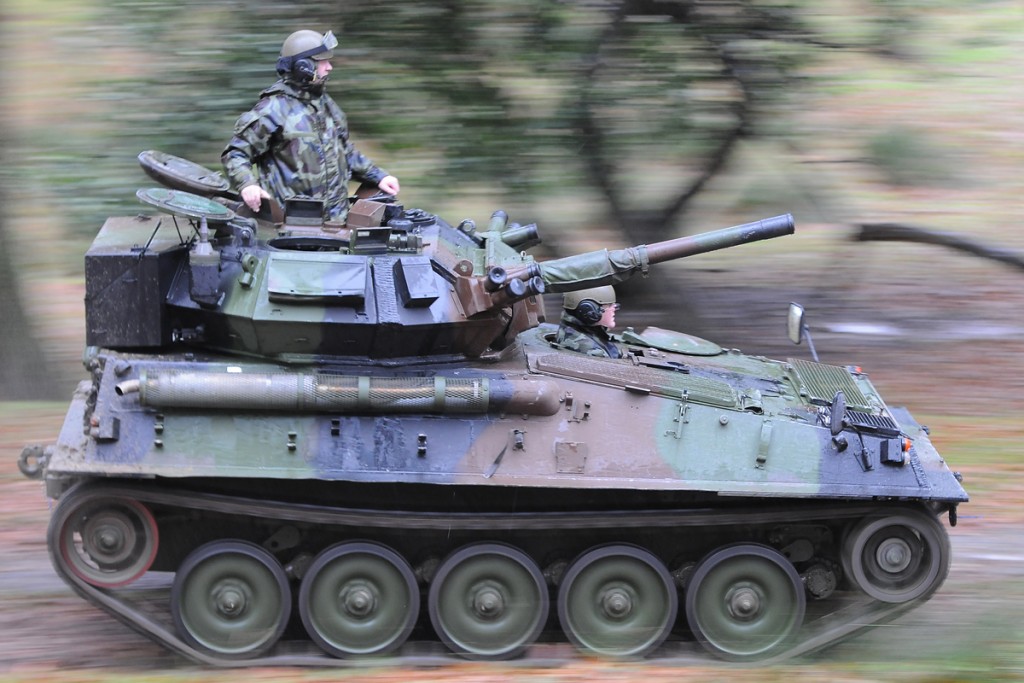 Forces ’85 – Looking ahead at the Team Yankee Brits

This week saw Battlefront announce the delivery schedule for the British Army of the Rhine (BAOR) book “Iron Maiden”.  Whilst this has been greeted with excitement, not everyone is going to be familiar with the British kit of 1985 so let me take you through a quick guide of what we can expect, based on the published schedule. When the Chieftain appeared in the 1970’s, it marked an evolutionary point for NATO’s amour.  Armour was thicker to stop the then threat of the 115mm round of the T-62, the driver sat reclined to reduce height and the bag charges of the two part ammo was stored in protected bins; the gun was a 120mm rifled gun to ensure long range accuracy and the killing power to make such a shot worthwhile.  The engine was…well, best left unmentioned.  History teaches you can never expect much from a 1970’s British Leyland…

But time waits for no-one.  The rest of NATO took notice and developed the M1 Abrams and Leopard 2, both equalling or surpassing the Chieftains armour, but using superior – and sometimes still British – materials rather than cast steel; and firepower, again taking advantage of the advance of computers and fin stabilised rounds to adopt a FCS controlled smoothbore rifle that could match the accuracy of the rifled gun whilst reducing barrel wear and boosting round velocity.  Similarly, the Warsaw pact adopted the T-64 and T-72 – both with a 125mm smoothbore  that could match the pre-DU performance of the British gun and had a similar level of armour.

We find the Chieftain of 1985 struggling to keep up.  Thanks to the Shah of Iran, the Challenger had emerged (other Chieftain replacements having fallen by the wayside) to replace the Chieftain but had only equipped one or two battalions by this point.  The Chieftain thus was up-engined in the late 70’s Mk.5 , then lost its ranging .50 in favour of a modern laser range finder before finally gaining some applique armour to increase the survivability to better match the Soviet capabilities.  It also gained the Improved Fire Control System although the I may not have been especially deserved.

In this final, Mk. 10 form, the Chieftain makes up the bulk of the British armour of the Team Yankee scenario. The FV432 is very much the 1960’s flavour of APC that amounted to little more than a steel box on tracks.  It never enjoyed the same export success as its cheaper US contemporary, the aluminium hulled M113, but served as the basis for numerous variants (some in TY) and, in its latest “Bulldog” form, stills serves the British Army.  It appears we have the Mk.II flavour to look forward to with its flush NBC pack and diesel engine.

The FV432 sports a cupola mounted 7.62 GMPG (licence build of the superb FN MAG)  for local defence.  It’s not known if it’s in the kit, but some FV432 mounted this in a simple turret, manufactured by Peak Engineering’s so called the “Peak turret” that was mounted in place of the main roof hatch.
An even stranger beast was the FV432 with the turret from a Fox armoured car to form a rudimentary IFV.  These only appear in the Berlin Brigade, outside the scope of the Iron Maiden book and I guess unlikely to be in the kit (but a simple resin or metal upgrade for future booklet lists?).

The release schedule states FV432/Swingfire so the Swingfire ATGW variant is present and correct.  Analogous to the ITV in US service, the Swingfire was a much larger missile with a novel  (1970’s British engineering – so read that as ‘unreliable’) thrust vectoring system that allowed it to be launched up to 90° off boresight to the target, the gunner using a dismounted sight to keep the vehicle hidden.  The missiles could be reloaded under cover which always makes the crew feel better too. The final version that we can anticipate, even if it’s not mentioned, is the 81mm Mortar Carrier.  The 81mm mortar was one of the cold war British export success stories and was adopted by a number of NATO and non-NATO users.  It’s a lighter round than the 4.2” mortar the US use but will no doubt have a smoke bombardment capability. Light and fast, the CVR(T) equipped the cavalry recce battalions, as well as a troop in the heavy armoured battalions HQ.  The two CVR(T) were blooded in the Falkland’s, their excellent ground pressure making them well suited to the boggy conditions, better than the Infantry sometimes. The 76mm had useful High Explosive Squash Head, Smoke and Canister round options, whilst the 30mm Rarden autocannon had excellent penetration for its size and proved the more successful version of the two – the Scorpion being re-equipped  in the 90’s with the 30mm from the Fox wheeled scout vehicle to form the Sabre.

The other two members of the family we can expect are the Spartan APC – used to carry Infantry, Blowpipe MANPAD teams, Milan ATGW Teams and 81mm mortars; and the Striker, a Swingfire armed variant that provided overwatch fire for the CVR(T) whilst, helpfully, appearing visually similar to a Spartan. The last of the known plastics, AH in this case means Army Helicopter. But the Lynx – the fastest helicopter of its time, served a similar purpose to the West German PAH-1, carrying wire guided anti-weapons to serve as mobile, stalking, tank destroyers.  The Lynx carried 8 TOW missiles in a pair of side mounted quad launchers much like the Cobra. The Lynx was also used to carry small teams of Infantry (although the Puma and Chinook did most of the troop carrying) and that included some experiments with air deploying Milan teams as a tank blocking force.  The presence of a ten stand MILAN group (rather than four stand Milan platoon) makes me wonder if we may see this.

The British Infantry, as has been the case throught the history of these fair isles, has been stated as being the strength of the Iron Maiden book and the combat history would suggest this was well founded.  Some of the Infantry, especially the Guards, had been blooded in the Falklands, a rare state in NATO.  The Infantry also bore the brunt of the Northern Ireland duties and this again gave some useful experience.

The Infantry were armed with the semi-automatic variant of the 7.62mm FN FAL, the Self Loading Rifle (SLR).  This was backed up with Sterling 9mm SMG for officers and a 7.62mm GPMG per section.  M72 LAW were often carried but the main anti-tank capability of a platoon came from each sections Carl Gustav (dubbed “Charlie G”) recoilless rifle. The HQ section also packed a 51mm light mortar – the successor of the WWII 2” mortar (and some of those were still kicking around!).

MILAN was licence built but, unlike the West Germans, was not a platoon asset.  Instead, the MILAN was deployed as a separate platoon – the spiritual successor to the 6pdr platoon of old!  Four MILAN teams, mounted in two FV432 provided much needed AT punch to the company.

The Abbot SPG, now a common sight in “tank driving experiences” (generally to a disgruntled response of “its not a tank”) was Britain finally giving up the 25pdr and getting with NATO standardisation.  Its 105mm gun was mounted on an FV432 chassis in a fully enclosed turret.  Given how understated the 155mm armed M109 (also present as the Royal Artillery also operated the type) has been in games -it remains to be seen what use the Abbot has outside of smoke and rarely needed suppression.

The Tracked Rapier – a combination of an M113 based flatbed transport with a command guided Rapier anti-aircraft missile system provides one part of the UK’s anti-air defence – broadly analogous the SA-13.  The Blowpipe, a command guided anti-aircraft missile (that generally did better against everything *but* aircraft) provides the MANPAD element but appears to have its Spartan ride play a central role (photos on WWPD showing a figure firing it from the top hatch). Unsurprisingly the Harrier is the aircraft of choice for the Close Air Support (CAS) role.  We are slightly too early for the Anglo-American “big wing” GR Mk.5, so we have to make do with the slightly smaller and wholly British, GR Mk.3.  The RAF would have operated these from convenient VTOL “Harrier Hides” near the front line to provide on-tap CAS with the BL-755 HEAT/frag cluster bomb, 540 and 1000lb general purpose bombs (both still looking like they should be under a Hawker Typhoon), SNEB 60mm Rockets and 30mm ADEN cannon.  The Harrier had, like the other RAF aircraft of the time, a marked target seeker (a device that looks for laser designated targets and makes them on the HUD) and could carry the UK 1000lb Paveway (mating a US seeker and GBU-10 tail to the stoutly UK 1000lb – and something I am far too familiar with).

Challenger was around in the time frame but was only equipping a pair of battalions (one in the UK and one in BAOR) and won’t be appearing in this release.

Warrior, the British IFV, had been sent to Germany for trails in 1984 but would be further refined before entering service in 1987.  Again, nothing to see in this release.

SA-80 and the LSW were just being issued in the tail end of 1985 so, again, its not something to expect for August 1985 of Team Yankee.

So there you go, a quick and dirty list of what the release schedule hints is coming.  Hopefully we’ll be getting some review material closer to the release (and hopefully the colonials over at WWPD don’t make too much of  a hash of it in the meantime ;)) so stay tuned for the British take on the British book in the near future!