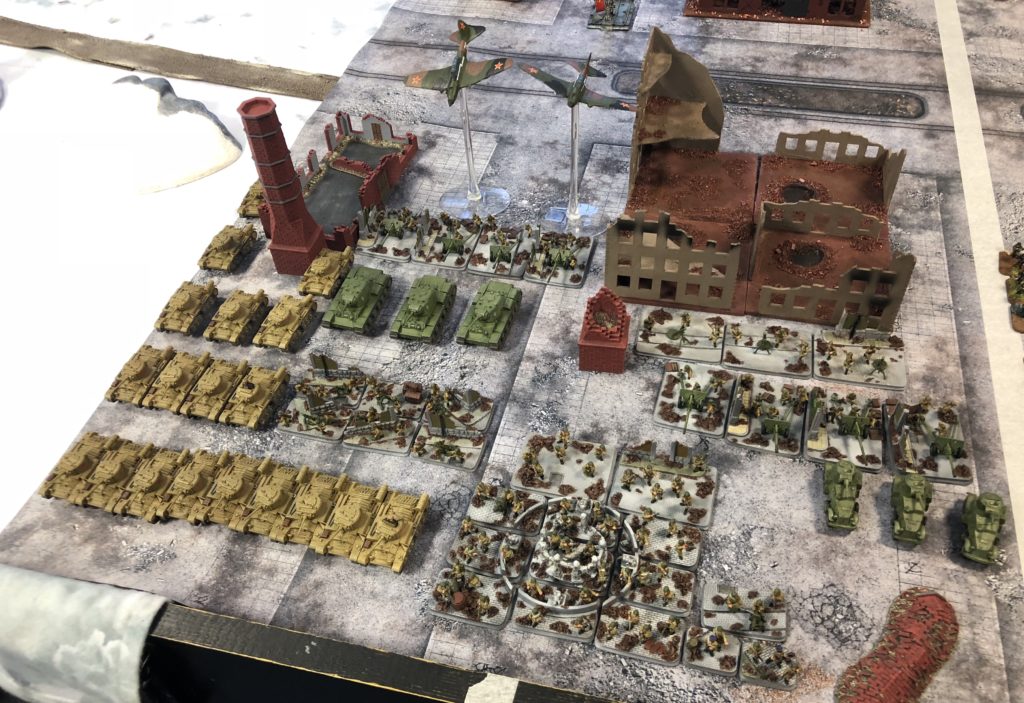 “This armchair strategist never possessed the qualities for true generalship, because he ignored practical problems.”

Recently Mark Nisbet ran a Firestorm Stalingrad event in Scotland.  Having returned from gaming exile were I was unable to teach camels how to roll dice, I was keen to put all the enforced hobby-time hardwork on my new Soviet force to good use and so joined in.

Firestorm Campaigns are a great way to create a themed event.  Mark N will be writing an article on how to run one so I will not steal too much of his thunder, but basically the premise of the campaign is to take and hold  areas of the map, representing parts of Stalingrad.
Depending on the stage of the day either the Germans or Soviets have the initiative.  For instance, at first the Soviets are counter attacking so on a 3+ they attack and on a 2+ the Germans get a counter attack in.  The attacking general places a attack arrow into an adjacent area and a battle is fought. The defender chooses to mount a prepared defence or a counter attack.  Depending on the stance you get a different table of missions.  If the defender wins a counter attack on a 4+ they the capture the enemies area instead (6+ for a static defence).
Players were also nominated for City Fights in Stalingrad and each victory offers a VP for your team.  In this event, two of the five games each round were city fights.

There is also are a pool of various troops that can be given out by the overall general of each side before a battle (a maximum of one set per player), called “Firestorm troops”, kindly supplied by Mark N.    I often had IL2s and our city fighting boys got a small Storm group in support. On the opposing sie, the German Tiger proved nasty as did the Stuka.

My 50pt city fight force was based around a Storm Group which I think is an ideal force for the Soviets and as I’ve said in the past, I think its the best platoon in the game.  The Hero infantry added a lot of stands for a good price, also packing a few PTRDs in case the enemy bought some armour.  Two templates from the mortars should also suppress rooms of the large Stalingrad buildings ready for the assault.

My 100pt main force is based around a lend lease Valentine force.  Normally I’d take IL2s instead of the second battery of guns but these were only available as firestorm units hence the extra four guns.  The force is a blunt instrument that is good vs infantry forces but can struggle against armour. Thankfully it turns out there were a lot of German infantry forces!

The first game was me attacking to the western outskirts of Stalingrad in the Winter of 1942 (hence the nice winter board).  I would be facing a Panzergrenadier force with Early StuG firestorm troops.  The mission was Contact.  I deployed both Valentine companies and both arty batteries.  Dave Forest deployed an infantry platoon on each objective, Pak38s, 88s, Stugs and Pak40s are placed in ambush.

Speed (well as much speed as a Valentine can muster) was going to be key.
I needed to get on the objective before his delayed reserves arrived or his PAK40s whittled me down.  The Valentines charged forward, hugging the centre building complex to shield from 88 shots.  The arty ranged in on the 88s and even killed one.  It was now a matter of time until they ran.  Dave’s PAK38s were in the farm and moved to hit my Valentines but wiffed.  My IL2 firestorm unit swept in and opened up on them killing two, forcing them to flee.  My Valentines made contact on the left flank forcing his infantry back.

At this point the ambush was sprung and the combination of blitzing StuGs, and PAK40s wiped out over half of a company.  I managed to get another assault in on the formation command, just avoiding defensive fire, but lost a Valentine through a bail and break off.  The left flank was now fairly locked down.  The attack swung to the right, the 88s had ran and the KVs were moving up from reserve.  As Dave’s pioneers arrived on the left flank there was little that could be done to save the right flank and I assaulted the poor infantry off of it.

A great game, and its surprising how quickly casualties mount when AT10 plus is bought to bear on reckless troops!

My next game was vs another Dave and another Panzergrenadier force.  Dave took Stukas as his firestorm unit and I got IL2s again.  The game was Breakthrough with me attacking.  I placed my SMGs in ‘flank reserves’ and Dave had three infantry platoons, three PzIV shorts on table with Marders placed in ambush.

My deployement zone was very packed, with so much on table.
I split the Valentines to the left and right flank with the BA-10s running off to flank the PzIV behind the Church and KVs in the centre.  The mortars were ranged in on the infantry in the church and started to blow them away with their re-roll misses, while a battery of 76mm guns joined in. The other battery took on the infantry on the hill.  Dave’s Stukas always seemed to arrive and I had underestimated their strength vs packed Valentines.  Their first pass killed or bailed almost half my left flank!  Thankfully the bailed ones remounted and kept going, assaulting the infantry off the hill.  My right flank Valentines moved up to church, largely ignoring the PzIV as they were not a threat with only AT7.  His Pz III arrived from reserve and went to try and get behind my right flank, through a wood.  A lucky kill from a BA-10 in their flank combined with a failed cross check, left the platoon commander on his own and they ran!

The Marders ambushed the flank of the left most Valentines, ripping them open, but not enough to stop the company.  The survivors pulled off another assault that killed the remaining infantry and HQ.  His arty arrived and licked their lips at the packed Soviet artillery, easily ranging in. Luckily, by this stage, the final infantry platoon was killed and now and the Germans withdrew to regroup.

The time had come for a city fight and I would be facing Italian Assault Pioneers backed up by 47mm gun and mortars,  also Firestorm PzIII longs.  However, I got some Flame KVs!

The Italians started aggressively attacking my Heroes to the top of the board, flaming them and pinning them both down.  They went for an assault but did it to two rooms, therefore the weight of defensive fire was too strong and forced them back.  I then assaulted them in the open, forcing them back to another building, heavily mauled.  His Panzers moved to support with their MGs mowing me down, but then got opened up on by the PTRDs to the side and KVs.  In the other building the fortified room meant I couldn’t get much headway.  I moved the Storm group up and even with 23 flamer shots failed to kill any Italians.  My assault failed to get through and we reached an impasse.  However, to the top of the board, the survivors of two heavily depleted Hero rifles companies managed to push the 47mm guns off the objective to claim victory.

A great day and thanks to Mark Nisbet for all the time he put into it.  It was great to get three fun games in after being away from the tale for so long.  I look forward to the Firestorm Kursk event later in the year.