Game 1 MSPAR VS Panzer Company – Free for All 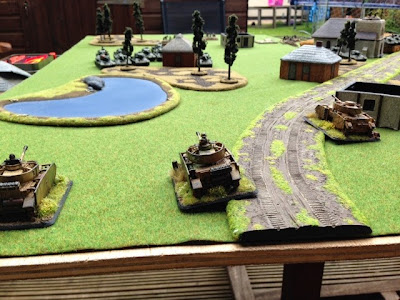 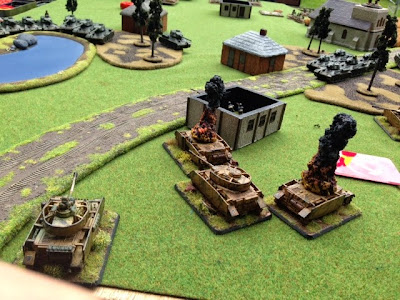 Game 2 – StuG Battery Vs Tankovy – Free For All

The battle was fought over a centrally located hill, which was rather large. Alex’s opening gambit was to move his motorcycle recce down one flank to put pressure on an objective. Unfortunately they were left unsupported and eventually machine gun fire whittled them down.

On the opposite flank my recce jeeps moved forward to put not very much pressure on an objective, but I think were the reason Alex’s firestorm Grenadiers didn’t move..so that was good.

Back in the centre, it boiled down to a massive amount of shooting across the hill.  I decided to ignore the King Tiger, which Alex was going to great lengths to keep at 16″ range.

10 T34/85s was definitely the way to go, as I was taking casualties nearly every turn.  Facing down King Tiger shots, Tiger shots, StuGs and StuHs was pretty nerve racking.  Fortunately for me Alex was rolling badly and missed an awful lot, which must have been frustrating.  So buckets of dice won the battle over elite dice.  One of my platoons had been reduced to the point of taking a morale check, but for once I passed a fearless check.

I was cautious with the IS-2s and only really brought them into play for the end game when their uber firepower was used to knock out an AA gun and the CinC, forcing a company morale check which couldn’t be taken.  At some point Alex did take one out with his KT, which must have felt quite good. 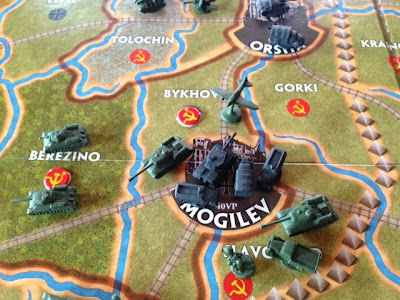