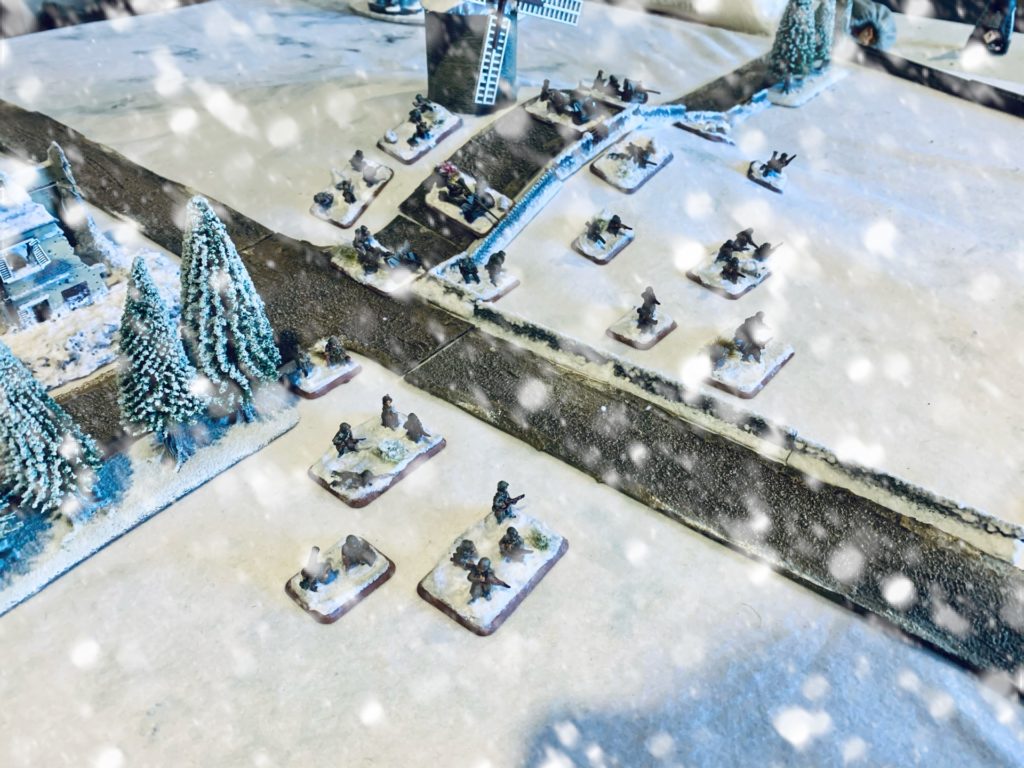 Fighting in a Winter Wonderland

As I looked outside at my snowy Northumberland village, my almost yearly desire to play a snow based game came rushing back.  The difference this year is that I decided that I wanted to revamp and update my winter scenery.

The key problem with a winter board is that you have to commit if you want it to look, well, wintery.   By this I mean that if you want your board to be snowy (full of heavy snow cover), it means almost all your scenery needs to go ‘full winter’, thus you need a dedicated set.  This is challenging for some more casual players who want the maximum utility out of theirt scenery.  Luckily I managed to combine some Battlefront battlefield in a box pieces with 3D printed stuff, and some ebay purchases to make things a little more affordable.

I am a big fan of the Battlefront Gaming mats, the neoprene surface and double sided nature makes a great game surface and is good value.  While I am sure a snow mat will come with the Battle of the Bulge releases in the summer, for now there isn’t one to meet this requirement.  Therefore I went to Cigar Battle Mats and found a nice snow effect on a fleece type mat.  Now looking back I really could have bought a white fleece/throw on eBay or Amazon much cheaper and had a similar effect.  Oh well, lesson learnt.

One advantage of fleece is that you can place it over hills to create relief that blends into the environment.  I used my existing green hills under the mat.  Now this can be hard to see, hence why I place something on the top and often put a road over it.  This helps it stand out.

I have loads of buildings from many manufactures and most can fit into many different environments.  The trouble with them on a winter board is the snow; there isn’t any on them.   I just can’t bring myself to put some on my collection of battlefield in a box terrain, therefore I decided to 3D print my own collection.  I used a resin printer because it provides quality prints, although it can be more limiting on build size.  Luckily at 15mm my Elegoo Saturn is up to the job.

Resin is about 34 GBP for a litre and that was way more than enough to build the centerpiece of the board (the farmstead) as well as two ruined buildings, a pair of houses and a windmill.  In fact, I plan to print more for a Battle of Foy scenario.  If you want to know how I painted them check out this article here.

I went for a high quality quick solution with my forests in the shape of the battlefield in a box winter trees.  Each box gives two tree bases and four “wooded area” bases is enough for most games (although areas of the Bulge were/are heavily wooded so more wouldn’t go a miss).

While the bases come with some snow on, I wanted my board to be deep, fresh, snow so I painted the whole base white and added more snow flock.  I sealed it with watered down PVA due to the abuse these bases are likely to get.

Next I purchased a set of the new battlefield in a box treelines.  Again I repainted the bases and also applied PVA to the trees and rolled them in snow flock.  Very quick and easy to do.

With loads of LOS blocking scenery sorted I now added some hedges and walls.  I found these on ebay as unpainted resin casts.  I could have printed them however sometimes you just want speed.  The hedges were painted green and had a dark wash applied while the walls were painted grey, had a wash applied and a dry brush of light grey.  When dry snow flock was applied to the top of the walls and hedges.

With this being winter you will not find crop fields, which are staple of many a game.  I instead printed hay bales of various heights and, after a quick coat of paint and a wash, just applied snow flock to the top.
Battlefield in a box also do some nice ones as an alternative to printing. It reminds me of the scene in Band of Brothers.

If you are going for a deep snow effect then you are going to want to model snow drifts.  I kept it simple and again went for battlefield in a box, however I added to them with some fluffy snow flock which helps blend it into the fleece mat.

My road and railway is still work in progress.  The roads were purchased on ebay with a dirt/snow effect many years ago however I plan to make my own which will have snow flock based on Soren’s recent tutorial.

The railway is also Battlefield in a box and while I plan to add snow flock, I need to find a new non snow affect set for my other boards first (they are hard to find these days).

Here are some pics of it all together.  I think its quite rare to find a snow board where almost all the scenery had been altered to meet the snow conditions, however it creates a brilliant effect.  I just need to wait out for the Bulge books coming out this summer.