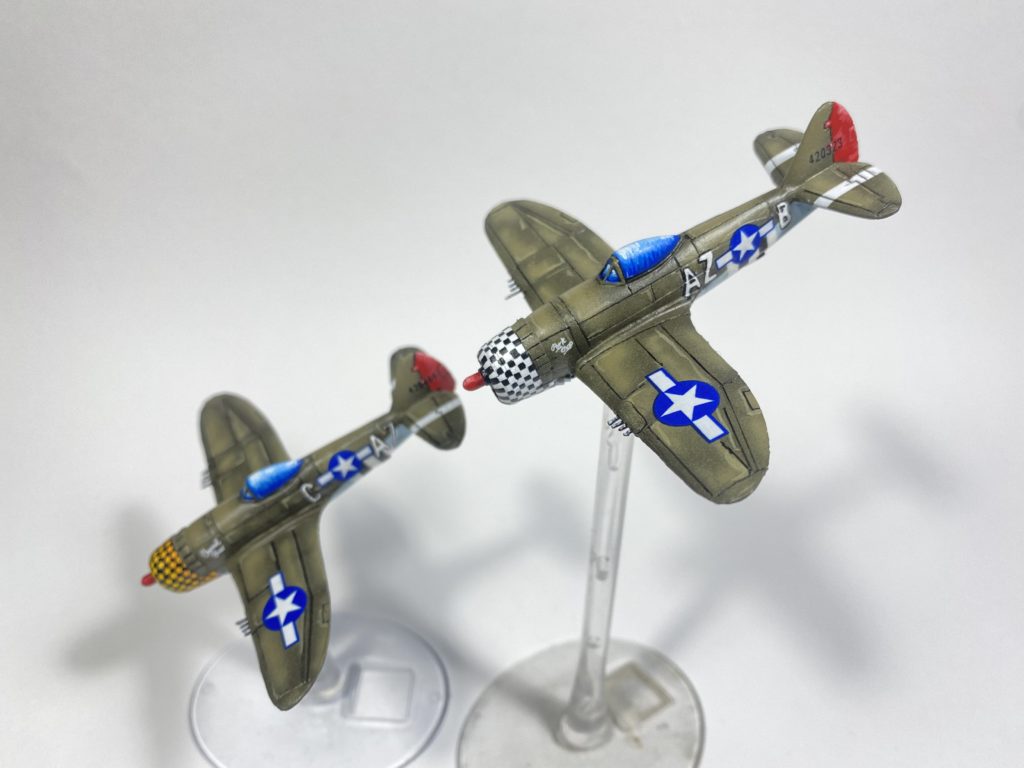 In my process of getting my Warfare2021 army painted and ready, I have come to the P-47 Thunderbolts. So how to paint them? Most of the models we see on the gaming tables are painted silver to give the feel of unpainted aluminium, which was the colour a lot of the planes was delivered in from the factories. But that is not the only colour they came in.

So after an enlightening conversation with Helge M., I decided to go with Olive Drab as the main colour of my planes. With that choice, another problem came up. A silver shining aircraft was bound to be an eye-catching addition to a mostly greenish US army list, but with the choice to make the P47’s green as well, I now needed some colour to make the planes stand out. Again Helge came to the rescue. “Just paint the nose in a checkerboard pattern,” he said.
Well, thank you, Helge! Challenge accepted.
So how do we get a checkerboard on the nose? Decals seemed to be an option, but after long hours of search, I didn’t find a single one. There is a company in Japan that makes all kinds of P47 decals and also a white/black nose decal, but I simply couldn’t find it.

Now with decals gone as an option, I began looking for ways to paint the pattern and as always the internet is packed with ideas and aircraft modellers are a huge group so there are lots of options, but painting 1/144 scale models is not the thing there are most of. One of the videos I watched use a thing called an EasyCutting board and help you cut down masking tape into suitable sizes with no problem at all. I decided to give it a go. There are a couple of manufacturers of this type of accessories, but the one I bought was from AK interactive.

From theory to practice

With all the materials at hand, there was nothing left to do than get on with it. I found two photos of patterns that I wanted to replicate and started.

The first thing to do was to cut the masking tape into strips 1mm thick. When you do this, just remember to start with cutting a straight edge so they all are the same size.

Then it’s just a question of getting the tape on to the model. This required a little patience, but nothing special. So, put some music on [or listen to the latest Shoot and Scoot episode – Lee] or watch your favourite youtube channel and carry on.

The pattern is made in two steps.
First, you make one set of squares and then you cover those up and do the second. to keep the distance between the squares the same it can be useful to use a strip of masking tape as a spacer, that way you make sure the blocks are equal size, at least in theory.

With the first masking done I airbrushed a fine layer of white over the nose of the aircraft. Waited 2-3 minutes and removed the tape.

Now, having the first set of blocks/squares makes it easier to put on the second layer of masking tape. Just cover up the white squares you made in the previous step.

Then add another layer of white from the airbrush and you are good to go.

As you can see in the photo, I sprayed a bit to much white or had the paint to thin, so some of the paint crept under the masking tape and required some clean up with a brush, but otherwise it turned out fine.

With the first test done and looking ok, it was time to step up my game and try my luck with the second pattern on my chosen scheme. 45 degrees twisted checkerboard pattern in yellow and black!

The technique used is exactly the same as before, with the little twist that the tape is put on at an angle. As I wanted to add a little colour variation in the yellow I started painting the whole nose in yellow and added a little orange towards the cockpit.

Just as before I made the first masking with my 1mm thick tape. Then I sprayed a layer of black.

Again, just like the first time I now covered up the newly painted squares and sprayed another layer of black.

Remove the tape and… voila. The nose-job on the second Thunderbolt is ready!

One thing to mention is that if you are not careful while putting the masking tape on, you will end up with some weird patterns.

This will have to be covered up when I paint the underside of the hull in light blue, but that will be later in the process.

I hope you have enjoyed reading this little tutorial and as always, you are more than welcome to comment or ask a question if there is anything you want to know. Happy hobbying.