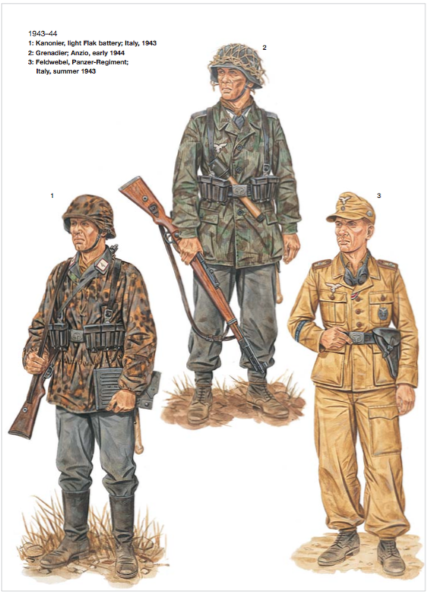 Today, Duncan looks bringing together his thoughts on creating a Hermann Goering Panzer Division for the fighting in Sicily and Italy in

Last time we looked at the creation and formation of the elite Hermann Goering Panzer Division and its deployment on the island of Sicily to oppose the Allied invasion; today we are going to consider what a 100pt Flames of War list might look like and how it may play.

I’m going to look at two examples of this list; firstly a more historically based Sicilian defence force and the second a more themed completive force with a more fluid composition that is still true to the formation we are replicating.

At the beginning of July 1943 The Axis forces defending Sicily in1943 initially fell under the command of General Alfredo Guzzoni and consisted of approximately 200,000 Italians and 60,000 Germans.

The German defenders included the formidable units 1st ‘Hermann Göring’ Panzer Division and the 15th Panzer Grenadier Division. A quarter of a million Axis soldiers defending an island that is around 26,000 km² sounds impressive but in just six weeks the Allied 7th and 8th Armies had taken the island, opened the Mediterranean shipping lanes and essentially knocking the Italians out of the war.

It also had the knock-on effect of forcing essentially forces on the Eastern Front to be redirected to Italy and the Balkans – around a 20% of the overall German fighting strength would now be tied up in Southern Europe will the end of hostilities in the European Theatre.

At the beginning of Operation Husky on 9th – 10th July 1943 the Herman Göring’ Panzer Division comprised of around 99 tanks, formed up in 2 battalions, but was short of integral infantry support, just 3 battalions, and was stationed east of highway 117 between Niscemi and Vizzini and to the north of the Biscari airfield. This would happen to be opposite the landing site of Task Force 343 – US 7th Army, under George S. Patton.

The night of the 9th July saw elements of the 82nd Airborne Division drop behind the defences at Gela and Scoglitti and on the 10th when the seaborne landings occurred the whole landing zone of Task Force 343 stretched some 50km from Licata in the west the Gulf of Gela to Scoglitti in the east.

The defensive plan of General Guzzoni was to have a thin crust of coastal formations of Italian forces which would receive the initial invasion and allow the bigger, collected strength held further back to the response to the landings and drive them back from their invasion beachheads.

The Italian 4th Mountain Infantry Division “Livorno” was positioned to the west of the German Panzer Division near Niscemi and was supported by the Italian Mobile Group E at Ponte Olivo with its embarrassingly obsolescent Fiat 3000 tanks. They were joined on the afternoon of the first day by the troops of the Herman Göring’ Panzer Division with 46 of its Panzer III and 32 Panzer IV tanks from Caltagirone, reinforced with a regiment of the 15th Panzergrenadiers and the formidable 215th Panzer Battalion its 17 Tiger I tanks.

Around The Hermann Göring Division approached Piano Lupo from Niscemi while 15th Panzergrenadiers supported by 17 Tiger I tanks approached from the Acate River. After some difficulty manoeuvring the Tiger tanks through olive groves and broken ground, the 15th panzergrenadiers overran the 1st battalion of the 45th Division’s 180th infantry regiment before being stopped by the 3rd battalion.

The Hermann Göring Division pushed through the 16th Infantry Regiment in Piano Lupo but stalled as they encountered naval gunfire when moving off the Piano Lupo highland toward the beachhead. After waiting through the remaining daylight for a rendezvous with the stalled 15th Panzergrenadiers, the Hermann Göring Division withdrew at dusk to regroup.

So give this background for the Hermann Göring Panzer Division on Sicily we can look to start compiling a list for our Flames of War games. We know that the Hermann Göring Panzer Division was lacking in its own integral infantry support, this is why troops from the 15th Panzer Grenadier Division were attached as part of their formation so I think we should build our force around a Panzer Company.

The timely arrival of the German Combined Force chart has made this army building malarkey for the Germans a little easier – because of the way that the Herman Göring Division had Panzer III and Panzer IV tanks in the same units we will base our force on the Mixed Panzer Company from Ghost Panzer.

Roughly speaking, very roughly, 32:46 is around 2 Panzer IVs for every 3 Panzer IIIs so that is what we will aim for.

So the full 100pts has 6 Panzer IIIs (some Panzer III N with the short barrelled 7.5cm guns) and 2 Panzer IV’s so we are slightly below the 3:2 ratio above but Panzer IVs are pretty pricey in MW.

In support I’ve included support from the 15th Panzer Grenadiers in the form of an Armoured Panzergrenadier Platoon and equipped them with Panzer-knackers to give them some AT capabilities. Finally, I’ve added in a small battery of Nebelwerfers to give us some cheap(ish) artillery – I found a reference that the Canadian troops to the east of the German positions on Sicily were “greeted by a salvo of rocket artillery” so thought it would be appropriate.

I think there is also a good opportunity here to include some Italian allies from the Livorno Division or some Fiat 3000 tanks from Mobile Group E masquerading as L6 tanks.

The majority of this force can be constructed from the Bäke’s Fire Brigade box set which makes it easier, and cheaper, to compile.

For more competitive or event play I generally prefer to take a more infantry-centric force; I have been trying to move past this in recent times but I recently picked up some more of the fantastic HG Pioneer figures and I think these will make a lovely force for 1943/44 in Italy.

As we are going to bind ourselves less around a specific time, unit and engagement there are new options available to us.

So, up first the Elephant in the room (I’ve been waiting for ages to use that pun!) – the inclusion of an Sd. 184 Elefant. Based on the Porsche Tiger (P) chassis and, in its original guise as the Ferdinand, it debuted at the battle of Kursk where 89 were deployed. The Ferdinand, with it’s 88 mm Pak 43/2 L/71, is mooted to be the most successful tank destroyer of the war with an alleged, 10:1 kill ratio.

This, however, masks the inherent design flaws in its creation with limited vision block and no anti-personnel weaponry – the Elefant retro-fit addressed some of these issues with the incorporation of a commander’s cupola and a 7.92 mm MG 34. Schwere Panzerjäger-Abteilung 653 was equipped with these monsters and fought in 1944 around the Anzio Beacheads so we can take some poetic licence here.

Once the Ferdinand had been included in Ghost Panzers I knew that at some point it was going into the Hermann Göring Panzer Division list here. I could have cheated a little with the composition of the main formation here and opted to use the cheaper Grenadiers but I couldn’t bring myself to do it – as Görings elite they really should be Panzergrenadiers so that is what I’ve opted for.

The Mixed Panzer Platoon, the armoured AA and one Panzergrenadier Platoon go into the 40% reserves if required still giving me quite a bit of punching power if required on table.

Controversially, I’ve also opted for Panzer-knackers over 2.8cm AT Rifles but there is some logic to my madness here. I’ve found that the 2.8cm AT Rifles do some serious work but because of this they get oh so picked on and when they die they leave your poor infantry defenceless.

The other thing that they lead to is temptation. The temptation to open fire and lift Gone to Ground on the rest of the unit. My theory with the Panzer-knackers is that they remain a threat up until they are used and they threaten all opposing tanks with their AT3. There is no additional temptation to fire carelessly and they cannot be picked out of the unit. It’s a theory, and one I need to assess in action to add some hard data into the mix.

The final comment of note is that I would model the Armoured AA platoon not as SdKfz 10/4 Halftracks but as SdKfz 251/17C Halftracks. As part of the Luftwaffe the Hermann Göring Panzer Division was issued and used the modified 251s with 2cm AA guns and this would a) be cool and b) set them apart from other similar formations.

Well that’s all for now, so until next time…