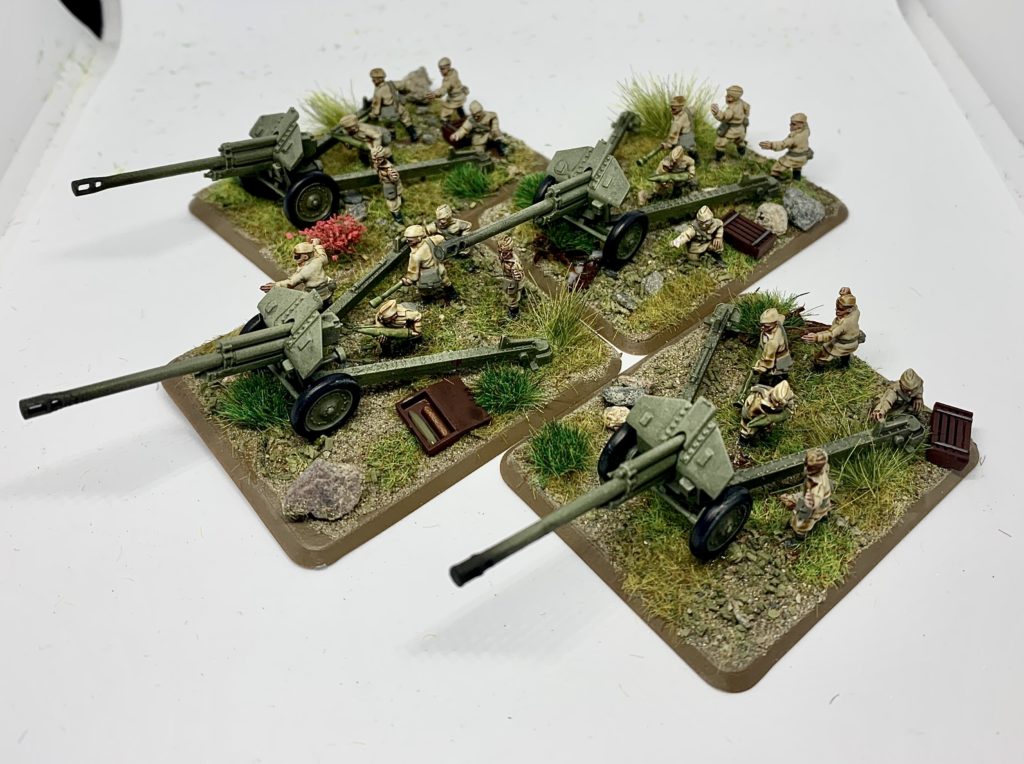 Today Mark takes us step by step through painting Soviet artillery, with the plastic 152mm artillery battery which he picked up with Battlefront’s recent daily deals.

I started by assembling the guns as per the instruction on the box. As the box is for the 122mm guns but both come on the sprue I just replaced that part with the 152mm barrel. Guns were then sprayed grey and infantry white. For this I used a basic matt primer I get from Wilkinsons.

I used the Mig Russian armour modulation set with an airbrush to apply the green.  It’s four shades of green with each layer getting brighter.  Hard to show in this light.  Better in the light box pics at the end of this article.

Next I added a Mig Green filter.  It works a lot like a wash but is more subtle and I find doesn’t pool on flat surfaces the same way as a traditional wash.

The wheels are painted black and I give the model a light drybrush of Vallejo Iraqi Sand.  This helps make the detail pop a bit.

As a bit of weathering I gave the end of the barrels a black dry brush to show the build up of dirt from the fire missions they will be performing.

Next up is the infantry and this is all done with Citadel Contrast paints.  Boots are Templar Black, green areas are Militarium Green, skin is Gulliman Flesh, and uniform is Skeleton Horde.  I keep them on sprue as it helps me ensure you reach everything easily with your brush.

If you are wondering why one model is unpainted, that’s because he is carrying the 122mm shell so isn’t needed.  All I have added here is a layer of Vallejo Green Grey on the straps and webbing of the crew.

Next up I glue on the crew (not the gun). The base had been sprayed brown before hand. I give the base of the crew stands a quick brown layer, don’t worry about what brown you use, its purely to ensure that of the flock missed something you don’t see white.

I apply my ground cover which I found on Ebay and is called ‘Models Basing Material Rugged Moss Mix 750g’.  Its a mix of various flocks, sand and stones which I find makes a great initial layer for your base.  I applied it with PVA glue.
Don’t worry that you can see the crew base rings, that will soon be sorted.

With the gun now glued on I add two types of static grass; A summer mix by Gale Force 9 and also some dead grass, I think also by Gale Force 9, which represents that brownish yellow grass you get late summer.
I made sure that I applied it around the crew bases where the rim of the base was showing as well as in random patches. I then added various tufts and bushes from my collection. The red flower goes on 1 base in the gun battery as it marks the unit leader clearly.

There you have it, a really quick and simple way to get Soviet guns onto the table.  Hopefully that will be useful for those delving into or adding to their Soviet armies especially with Bagration coming for Late War in a few months.