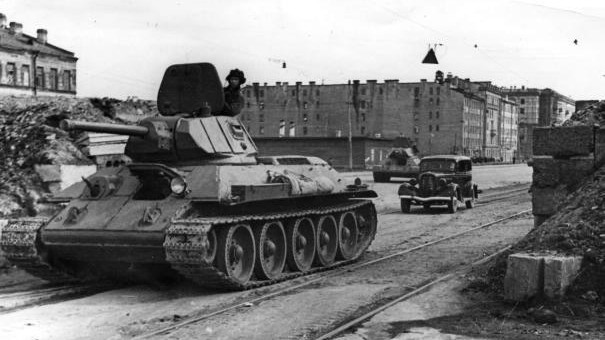 This article covers the first game I played with the T-34 (early) Tank Battalion force from Enemy at the Gates from my previous article. Part 2 will cover the repeat game, with the T-34 Hero Tank Battalion I evolved from this list using Red Banner, and what I learnt about both the lists.

I set this list up to play against a generic German Force from Iron Cross.  Like the Soviet list, the German list had to be picked to cover most types of soviet list it could encounter. To ensure I didn’t unconsciously show any bias in the list, I got my regular playing partner Bryan to pick the list in isolation and I had no idea of the content until the day. The list he turned up with was a Jäger infantry formation which was an interesting choice. These guys move really quickly in dense terrain and have big platoons, they had some some support heavy AT and a powerful Panzer IV counter attack platoon.

The table was set up to represent the edge of an urban area, after all the book is all about Stalingrad, with one end comprising some ruined housing and small industrial buildings one of which was still intact.
The open areas on the grey base would be considered rubble strewn and require cross checks and provide bullet proof cover whilst the cobbled areas would be considered cleared.
The remaining 4′ of the table represented more generic countryside mix with fields and woodland and was crossed by a stream. We added a few snow drifts and and areas of still frozen ground to represent early winter or spring and agreed the stream would require a cross check to safely navigate due to ice or rapid flow.

We generated a scenario using the More Missions selector, I elected ‘attack’ and the Germans, not surprisingly with their list, chose the ‘defend’ stance.  The mission roll gave us the ‘No Retreat’ scenario, so we would be playing lengthwise. The Germans not unsurprisingly chose the end of the table with the ruins to defend, giving them cover and maximizing their jager ability. The brave soviet tankers would be fighting to reclaim this industrial area.

The battle plan was pretty simple, the two artillery units were set up ranged in on the two ruins where I expected the ambushing Pak 40 unit to appear, the good news for me was neither building was close enough to contest objective 1 which would be the target of my attack. The smaller T-34 unit would launch a frontal assault to occupy the Pak 40 ambush and keep the infantry that would inevitably be set up around the objective fixed in place. The larger T-34 unit with accompanying tank riding Hero SMG unit would try to flank objective 1 attacking through the woodland, supported by the T-60 unit as their ‘local knowledge’ command card might be handy here.
I simply had to grab the objective before the single German reserve unit showed up – someone has read Fez’s article, In the Rear with Gear.

Things didn’t start so well with five tanks failing to cross the partially frozen stream.  I advanced as fast as possible and there was little shooting, just the mortars ranged in on the dug in grenadiers holding the target objective. I had used the ‘Reconnaissance by Force’ command card to redeploy their ranged in marker; it looked a good move initially as they killed four teams.

German turn 1 went unhelpfully for me with the Panzer IV platoon immediately arriving from reserve and the ambushing Pak 40 unit appearing in the now no longer targeted ruins. Initially I had set up my mortar unit ranged in here but after checking the range I couldn’t hit it with all of them and elected to move the marker on to the infantry unit surrounding the objective – a poor decision despite their initial success as you’ll soon discover! The tanks, rather than reinforcing objective 1, came on to face off against my delayed larger T-34 unit on the german left flank which was interesting decision as they were a long way from objective 1 and there was little chance of me getting near objective 2. The Pak 40s immediately accounted for two T-34’s and bailed a third, the Panzer IVs only managed to bail out two but they also killed one Hero SMG team in the process.

The soviet advance continued with me again failing another bunch of cross checks, but I got the T-60 unit close enough to assault.
I elected to move part of the mortar unit to be able to bombard the Pak 40 unit next turn with six teams, or so I hoped. I duly failed to range in with the three stationary teams!
My main T-34 unit moved up towards the woods but several tanks got stuck in the drifting snow.

The side armour 1 on the T-60’s demonstrated why assaulting with them is risky as I amazingly lost three tanks to inspired defensive fire, halting my assault before it began. All this was despite having pinned the Grenadiers and the Pak 40 unit being out of assault defensive fire range! The two remaining T-34’s in the diversionary unit killed a couple of grenadier teams but failed to push them off the objective.

In their turn the Germans HQ fell back to the ruins away from my marauding T-34 unit with the Hero SMG riders closing through the wood, the grenadiers dug back in whilst the Pak 40s eliminated more of my T-34s and T-60s. The Panzer IVs sensing the pressure on objective 1  began to move through the urban area with a blitz and dash but failing their follow me from a storm trooper roll left them a bit out of position.

Woe is me, another poor turn with the dice, the mortars again fail to range in and my small T-34 unit fail their last stand test and leave the battlefield. The remaining  T-34s advance through the wood managing to bail one Panzer IV. The T-60’s exchange fire with the Pak 40s to little affect. In the German turn the Panzer IV remounts and the unit continues to move forward ready to defend objective 1 and, coupled with the Pak 40s, my T-60 unit is destroyed.

So I had lost two platoons for none killed in return. It wasn’t looking brilliant, but I was in position to assault again next turn with the Hero SMG unit and my main T-34 unit was unscathed.

The BA-10 unit move up using the wrecked T-60 tanks as cover to contest the objective. Aided by the bombardments from the mortar, Zis-3 and direct fire from the The T-34s I mange managed kill to bail out three panzer IVs. Sensing their moment the Hero SMG unit assault from the backs of the T-34 destroying the remaining Grenadiers but only two teams remained at the end of the assault.

The dice turn, the Germans tanks fail to remount, and I had two platoons contesting the objective; the Hero SMG company and BA-10s poised for victory in Turn 5. The German shooting step was heavily reduced with three bailed out tanks and they were now shooting my harder to hit units. As the turn played out the Hero SMG unit was eliminated along with two BA-10s but the third still active. It would all come down to a single die roll at the start of turn 5.

Lesson 1 – be mentally prepared for big losses and don’t panic; stick to your plan. In real life these forces often suffered 70% or more casualties and in FoW you can expect the same kind of attrition on your troops. I lost a total of 16 out of 25 vehicles in the game to just four tanks and four guns! This has made me somewhat concerned about the size of the Hero tank platoons.

Lesson 2 – The T-60 units are very fragile, even when assaulting a weakened grenadier unit, defensive fire proved too much for them.  My dice weren’t great, but getting hit on a 2+ really increased the odds of the infantry teams coming up with that second bailing result they needed, plus the 2.8cm AT rifle was always going to get one kill/bail result.

Lesson 3 – try to avoid having to range in more than you need to, especially when you need 6’s. I really ought not to have removed my ranged in marker for the mortar unit even with only three teams they would have caused the my opponent to reconsider the Pak 40 ambush deployment and may well have saved my tanks taking such rapid losses in the initial two turns as they were able to deploy at close range in the ruins without too much fear from my artillery.

Lesson 4 – having a big core formation really helped keep me in the fight even if I was forced into hiding my HQ tank to ensure I didn’t get routed if the Panzer IVs remounted.  This augurs well for the balance of the Hero build. If the Panzer IV unit had remounted as it should have done I had expected to loose a large proportion of my main T-34 unit next turn, luckily my opponent managed to fail six 4+ rolls.

So What would I change?

Looking to make this list a bit more competitive for next time out and sticking with the soviet armour theme things I would consider changing are: