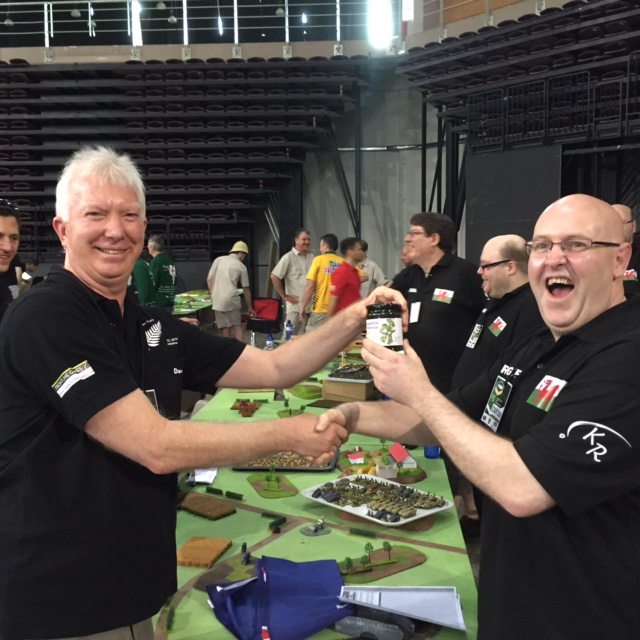 Just over a week ago Team Wales returned from the European Team Championships (ETC) in Athens.  For those unaware this is basically the world champs for FOW (Along with Warhammer, 40k and X-Wing).

Team Wales put in a great performance achieving the Captains aim of coming in the top 10 (we came 8th) and winning best painted team for the second year running (matching the record previously held by team England).

The comp was 1650pts MW, below are the armies we fielded, This handy picture kindly made at www.tomsmagazine.blogspot.hr shows how we did each round, 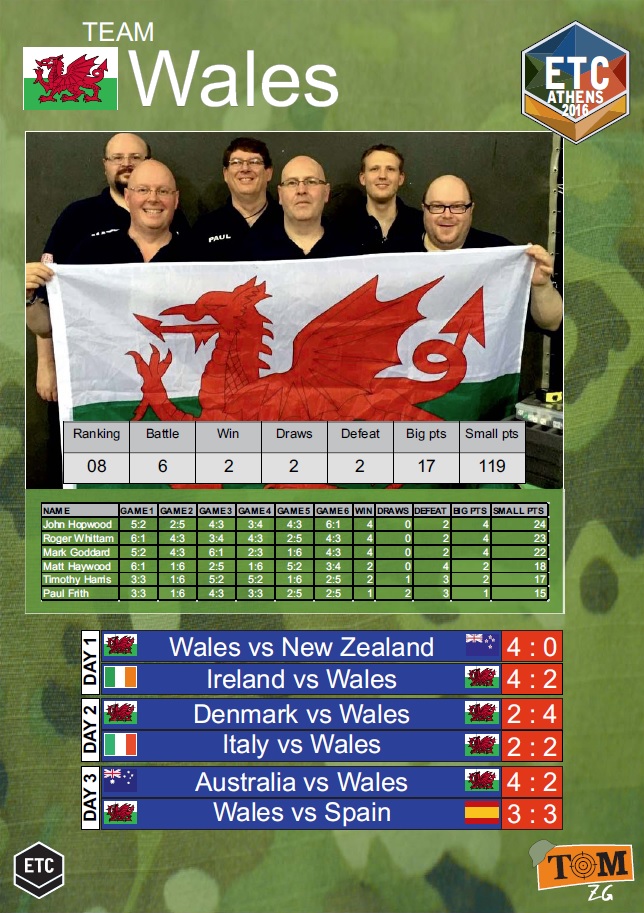 1.Dust Up Vs Team Kiwi:  Poor Dave M he was having a bad morning (I blame the beer).  He was playing with a German Panzer company with a few Hornisses thrown in for good measure.  While these did keep my Ferdinand honest, he managed to lose one to my AA as it arrived from reserve.  As I pushed onto his obj he forgot to contest it and well that’s all we wrote.   Had the game continued he would have been forced to feed PZ4s to my hungry Elephant so it was over either way.  A great game against a great guy, apparently I am now his FOW nemesis… 2.Breakthrough vs Ireland:  A match up I wasn’t really thrilled about, FT Strelk!  Luckily (as it turned out) I rolled to attack.  I placed my 2 x minefields to restrict his big inf blob getting to the objectives and then went to town on his God of War with my Stuhs blowing them away.  My inf started to push out and after a bit of back and forth set the conditions for ‘Nelly’ the Ferdinand to get into his deployment back corner and assault his howitzers, capturing them.  By this stage he only had his Scouts and inf left and after a few turns of cat and mouse around a forest and I finally broke this Fearless company.  It was a long slog and was only possible with the 3hr rounds at ETC (and breakthrough guns!).  Moment of the game was 5 pioneers and 4 inf stands failing to gap a minefield and 4 of them blowing up!

3.Pincer vs Denmark:  I ended up defending against US tanks.  The whole game was one of bum clenching moments as my poor placement of my AA meant his air support managed to range in on my Stuhs.  Thank goodness he rolled a 1 for FP!  His M10s were always a concern but he lost the dual with the Stuhs due to poor dice and not realising that his mortars had DF smoke!  Lesson learnt.  Moment of the game was a Stuart platoon breaking after  a round of Stuh shooting, taking the IC and 2IC with it.

4.Fair fight vs Italy:  Fittingly I faced Italian Infantry (first time ever).  This was going to be a draw from the start.  I didn’t have enough to attack him and he didn’t have enough to get in get onto my obj.  He gave it a great try with 20 CV inf stands with bombs (scary), but defensive fire was just too strong.  A great opponent but a fairly boring game for both of us.  I hate fair fight when its inf vs inf draws are so common.  Moment of the game was saving Nelly from a bombing run.

5.Hold the Line vs Australia:  I was matched against a Russian lend lease army full of Shermans.  Now I lost this 6:1 and I must admit I made 2 massive mistakes.  Firstly I set my wire to block the whole width of the meaning his recce couldn’t move forward so was useless.  Not a bad move I hear you cry…well really I should have used 2 x minefields to deny a flank and force him onto the centre obj (next to some buildings).  Secondly my natural instinct was to put my second pioneer platoon in a wood by the flank objective.  In retrospect it should have been in the open in a tight box (no template weapons) with my Ferdinand behind ready to give defensive fire.  Luck also ran out for me in a big way.  His Stuarts assaulted my pioneers in the wood, dodged the AA defensive fire, killed 3 (2 died to their mG fire the turn before!), failed to counter, failed to dig in the next turn and then broke taking the IC with them.  By that stage it was open season on flank shots by the Shermans on the Ferdinand who was holding an obj on her own.  The indignity of losing Nelly to a nasty Soviet M4 🙁

6. Counter attack vs Panther Company:  ‘Hurrah Panthers’!  I am one of the few people who said that this Tournament.  It was a dance between a pack of Panthers and Nelly.  Nelly ate 3 on her own with a Sttuh claiming another on a flank shot (losing them in the process).  It was a real nail biter of a game but in the end his company broke with Nelly and the CiC holding the obj.  Also it was my first experience of motorcycles.  They are good, I know that now.  Moment of the game was surviving a careless side shot on my Ferdinand which basically would have won him the game turn 4.

Overall 4 wins, a draw and a loss, not bad for 3 days work.. All the games were tough and enjoyable.

I would like to say thanks to our 2 sponsors, KR Multi Cases who supplied a awesome dice tray for all team wales and all our opponents and the Plastic Soldier Company who paid for our team shirts and supplied a Sherman and Pz4 sprue for each of our opponents.  You guys are great and its much appreciated.

Next year is 1625pt LW and list creation was already happening over dinner on the final night.  Until next year….