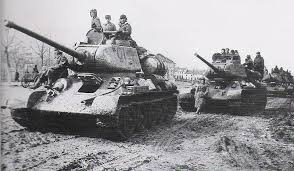 Engagement in the East

With the allied operations in Normandy well underway the allied leadership continued to press Stalin to keep up his offensives in the east. He had to keep the German forces on the eastern front occupied and to prevent Hitler from moving resources west to counter the allied onslaught in France.

This game saw my 5th Guards Tank Army attempt to overrun a German defensive position near a key river crossing in eastern Europe. The game was fighting withdrawal between a Soviet Hero T-34 Battalion equipped with some of the latest Soviet tanks and a heavily reinforced German Grenadier Company.

The German forces comprised Grenadier Company HQ with panzerfausts, 2 platoons with ‘fausts each with 2 panzershreck teams and 2 HMG’s attached and a battery of 7.5cm infantry guns (x4) supported Stugs (x5) and a Tiger platoon (x3).

The Germans set up to block the Soviet advance along the road and across the open ground fearing the speed of the T-34’s whilst I deployed the Soviets with a refused flank using one T-34 platoon to block any easy redeployment of the Stugs from the german left whilst my main attack would be against the infantry on the german right. The artillery formed the centre of my battle line where it could threaten any river crossing by the infantry in the central village and the SU-76’s could assist my blocking force if the Stugs looked like they would breakthrough. Now the Tiger unit was held in ambush but given the German deployment, I fully expected it to appear in the woods holding the objective safe from a frontal assault behind the german minefields.

The game started out with a massed bombardment of the enemy infantry position in the cornfield targeting the anti-tank teams whilst the T-34’s got ready for the assault. The infantry moved up through the woods and my blocking unit positioned ready to engage the Stugs once they came into range. The bombardments did a little damage with 1 panzershreck team being killed. In return the Stugs advanced against the screening unit but inflicted no damage, the infantry guns take out a Katyusha whilst the Tigers bided their time awaiting their moment to ambush.

The lead T34 unit advances into assault range and the Katyusha unit redeploy, with a series of devastating blasts the combined SU-76 and SU-122 bombardments kill 5 teams and the combined fire of the massed T-34’s reduces the once-powerful Grenadier unit to just 3 teams. The blocking unit picks off the lead Stug and bail out a second.

The German infantry falls back towards the objective whilst the Tigers appear from ambush but only succeed in bailing out two tanks.

The Soviet tankers recover their nerve and move to flank the Tigers and keep the infantry from regrouping. The blocking force engages the Stugs bailing one and killing one more. With some poor ranging in rolls the Soviet artillery looks to be unlikely to help this turn but the SU-122’s do manage to range in catching a Tiger and the retreating infantry in its blast thanks to the dice gods the Tiger gets bailed out and the infantry is reduced to a single team. Opening up with all the 85mm guns I could muster I targetted the Tiger platoon scoring two hits but with the range and the Tigers thick armour I didn’t have much expectation of doing any real damage but…

As the dice stopped spinning it was snake eyes and two killing hits had been scored reducing the mighty Tiger platoon to a single tank.

Turn 3 saw things go from bad to worse as the bailed Stugs fail to remount so there were 3 platoons testing their moral to stay in the fight. The lone infantry team held its nerve, the Stugs easily hold but inexplicably the remaining Tiger fails its motivation and is forced to flee. In a desperate bid to hold the Soviet advance, the German infantry starts to redeploy across the river. The Infantry guns again target the Katyushas killing another and the one Stugs elect to pick off my lone T-34/76 that had taken up a flanking position, this also prevented any hits being put on my T-34/85’s as they were too far away.

In the game you have to try to force your opponent to do things he doesn’t want to do, the threat of my tank behind the Stugs was enough to make my opponent give up the option to take on my more powerful tanks to ensure its destruction.

This turn saw the end game take shape as the T-34’s on the left poured forward through the crop fields at top speed towards and the soviet infantry push forward in a race to the objective, crossing the minefields proved difficult and the SMG company suffered heavy casualties and became pinned down. The battle with the Stugs ended with their destruction as the T-34/85’s blitzed into short-range and disabled all the remaining assault guns (1 killed, 2 bailed).

The Soviet artillery failed to range in effectively and did no damage to the infantry crossing the river. The Germans sensing a narrow escape had a chance to recover but thanks to the Strategic Withdrawl rule they had to remove 1 platoon after some debate they elected to remove the Stug battery which had failed to remount and only had a lone tank functioning (the alternative was to remove either the infantry HQ or the depleted infantry platoon but this would have left them very susceptible to a formation break) the redeploying grenadiers moved into the woods killing the SMG unit thanks to their two HMG’s.

I decided to slow the Soviet advance a little in turn 4 with the German armour having left the field I had time to soften up the remaining infantry with my artillery and focussed both my self propelled artillery units and remaining Katyushas on the river crossing before sending in the T-34’s to mop up the last of the infantry for decisive Soviet victory preventing the Germans withdrawing valuable resources away from the eastern front.

My forces delivered on their plan, the artillery bombardments in turns 2 and 4 were devastating the SU-122 may be an old tank but it proved a powerful tool coupled with the more flexible SU-76’s. The Katyushas whilst flavourful were difficult to use beyond turn 1 and suffered badly to counter-battery fire with their 5+ save. I was helped by some poor dice and debatable initial deployment choices by my opponent but the speed and concentration of my forces in the attack left my opponent no time to redeploy and recover.

Comrade Stalin had fulfilled his promise to the other allied leaders.