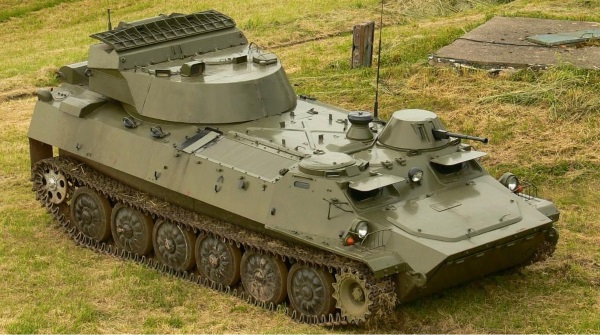 Hi Duncan here again and today I’m looking at Skytrex SNAR-10 “Big Fred” – but why I hear you cry, it’s no use for Team Yankee! Well dear reader go on and let us see how far the rabbit hole goes…

… ok not very far – I’m going to use it as an objective for my Soviets. I’ll deal with that in another post but for now let’s look at this awesome model. So what the deuce is the “Big Fred”?

The 1RL-127 (“BIG FRED”) is in a nutshell like Big Ben – it is the name of the ground radar system mounted in the SNAR-10 (stantsiya nazemnoy artilleriskoy razvedki); a chassis based on the old workhorse MT-LB. The MT-LB is Soviet multi-purpose fully amphibious auxiliary armoured tracked vehicle, which was first introduced in the late 1960s and is the mounting for all kinds of brilliant support variants as well as the SA-13 Gopher and the 2S1 Carnation 122mm self-propelled howitzer.

With an effective range of around 16km the “Big Fred” is a battlefield surveillance radar used to find and track both stationary and moving enemy ground targets. Typical uses are to identify enemy convoys, rocket or tube artillery even up to the spotting individual vehicles. The radar is sensitive enough that it can see bursts of artillery shells and even small groups of infantry on foot and so can be used to correct the fall of shot from friendly batteries.

So on to the model itself. Firstly as a resin and metal model it is reasonably priced at £7.50 in line with its contemporaries in the 15mm market (and even some plastics). If I had any gripes with the cost it was not with the model but with the postage which was set in the UK at a flat £5 which did seem a little costly for the two vehicles I ordered. A little too much of a before shot I think… To me scale is more about how the model fits the 15mm playing surface and the other vehicles around it – I realise that this is not the case for everyone so I will go over a little of the detail as well. *produces rivet counting abacus*

The MT-LB chassis that the SNAR-10 uses has the following real life dimensions:

So for our 1/100 scale, 15mm model we should have a length around 6.5cm, a width of around 2.9cm and a height of around 1.9cm. With these dimensions including some wiggle room the Skytrex SNAR-10 is still on the chunky side of the equation with a length of 6.9cm, a width or 3.2cm and height (excluding the turret) of 1.8cm. This size difference is even more pronounced when compared to the much more accurately scaled Battlefront hull which can be seen in the picture below. This could be an issue if you are looking to field this model in and amongst other vehicles based on the same hull. I, however, am not so I will leave that particular can of worms for another day. The Big Fred lives up to it’s moniker

To me this is, in some respects, more important that the scale – just how good does this vehicle look? Well that is a very easy question to answer: it looks awesome.

The casting itself is some of the best I’ve seen. The detail, where present, is crisp if a little simplified. Both the resin hull and turret and metal tracks, machine gun turret and radar were all virtually without any flash or debris associated to them at all and what was there on the hull came away very easily with the soft application of pressure on a sharp scalpel.

Once tidied up the kit was extremely simple to pop together with some dry-fitting a few blobs of superglue. The total construction time was 5 minutes – winner. Spot the flash (ah-ahh) if you can Everything fits neatly and snugly together under here

As I mention before that is currently no Team Yankee in game use for Big Fred but this model and some of the others in the Skytrex range open up a wonderful new world of modelling options for either terrain or for objective markers.

Before deciding that my need for some nice objectives was most pressing I had considered doing the Big Fred up to look like it had been attacked by an A-10 and pop it on the table as some interesting fancy to break up the open areas of our boards. I love the Battlefront destroyed desert vehicles terrain set and this may be something I come back to at a later date… because it’s cool.

I think it is pretty clear by now that I am a fan of this model. It combines the quirkiness that I love with a lovely clean casting and give me something a bit nicer than a plain large base to drive my T-72s towards (hopefully).

If I am being picky then I wish that there was a little more detail sculpted – especially on the hull. That is a real stretch though as the vehicle is very utilitarian – we are not talking fine scale modelling here!