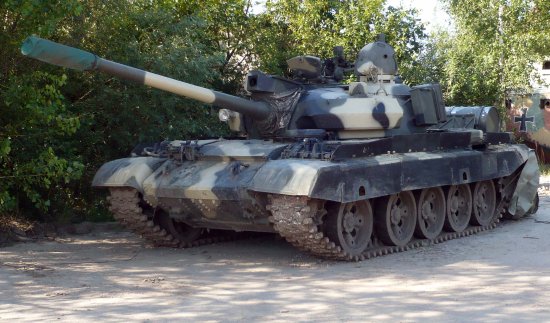 So, here we are for my third and final installment of the comparison review of the three main T series tanks in Team Yankee. Part one covered the T72, part two the T62, and today we will be going over the oldest and most prolific of the three; the T55.

As with the previous entries, I will be evaluating the forces that use the T55 based off armor/armament, skill ratings, and point costs to determine which force has the best overall use of the T55. Of course, this is simply my assessment and players are free to use and play what they wish! The T55 is unique as it does not have a Soviet version (yet), being used by the three Non-Soviet Warsaw Pact countries along with Iraq/Syria and Iran. However, as in the previous articles, I am omitting the Iranians as their numbers don’t offer a good comparison with the others.

The T55 is the most widely produced tank in history, with a total estimated production of 86,000 to 100,000. It is a direct descendant of the T-44, which is itself an evolution of the legendary T-34. It entered service in the 1950s as the basic T-54, then received upgrades (primarily its Nuclear, Biological, and Chemical systems) to become the T55 model. Packing a 100mm gun, it was the first Soviet Main Battle Tank and caused great interest in the West to the point that development of the British L7 Tank Gun and the American M60 tanks can be attributed to it’s appearance. In it’s nearly 70 years of service in over 50 countries, the T55 has been upgraded with modern equipment like Laser Rangefinders (LRF), stabilizers and applique armor packages. It is a reliable tank that still sees use in warzones the world over.

So, we begin our assessment by comparing the arms and armor of the T55 among its four main forces: the DDR, Czechoslovaks, Poles, and Iraqis.
The Non Soviet Warsaw Pact (NSWP) nations all use a more modern T55 variant, the AM2. With an applique “horseshoe” armor package and bazooka skirts standard, the T55AM2 has armor rated 14/9/2.
While not overly impressive with top tier NATO and Soviet tanks, it can hold its own with Leopard 1s, AMXs, and Oil War T series tanks.
The T55AM2’s gun is rated AT17, with LRF and Slow Firing. So while this tank has some handicaps compared to its newer brethren, it still benefits from an LRF and Infrared.

The Iraqi T55 is a much more basic model, rated at 13/9/2 with a 1 point option for bazooka skirts for the unit. The gun is AT16, slow firing, with infrared. There is no LRF, which means you’ll be paying doubly so for moving and trying to engage over 16″. Like the T55AM2, the Iraqi T55 won’t be able to fight most enemy tank threats from the front.
Good thing you can take a lot of them!

Overall, the NSWP T55AM2 is the better tank across the board. As the stats are the same between the 3 NSWP nations, its a 3 way tie between them with the Iraqis unfortunately lagging behind

When we compare skill ratings, the different T55 forces start to set themselves apart.

This becomes a bit tough to gauge, particularly between the Poles and East Germans. The DDR tankers have longer staying power due to their morale, while the Poles can potentially benefit due to their better courage, remount, and counterattack ratings to get stuck in with the enemy. This comes down to the player, if they value more aggressive play or better staying power. For me, I think morale is key as when the forces lose casualties (and they will, with this tank) to have better than a 50/50 shot on the dice. Remount is nice, but as most things can kill the T55 outright its less a factor. And the good counterattack rating, well, it has its uses but I wouldn’t send T55s into the assault unless the deck was stacked.
So, on the basis of the better morale I am going to give the razor thin win to the DDR.

So, as most of us know, the T55 is a dirt cheap tank. I have heard many a player discuss the “T55 Horde” on forums and chats. However, more isn’t necessarily better and one needs to consider what they’re getting in return for the points.

As before, I am basing this off roughly spending 50 odd points on the tanks themselves to be in line with the 93 point official tournament pointings.
In this regard the DDR brings 31 T55s at 49 points, the Poles 31 tanks at 52 points, and the Czechs 42 tanks for 51 points which can be split between one formation with 3 units of 10 plus HQ and one formation of 2 units of 5 plus HQ.

However, the real mind blower here are the Iraqis. At 1 to 1.5 point(s) a tank, they can take an incredible 52 tanks for 57 points!!!! With those numbers you’re talking a 10:1 advantage against Leo2s, a 7:1 advantage over IPM1s, and 3:1 over M60s. That’s some crazy numbers, and I think deserves a win for sheer quality of quantity the Iraqis can bring.

AND THE WINNER IS……

Man, I think this was the closest competition out of any of these articles.

Each nation has its merits, from the aggression of the Poles to the numbers of the Iraqis.
The first category was a three-way tie, so it came down to analysis of the latter two categories. Again, it was very close but after careful analysis the win goes to the Nationale Volksarmee of the DDR. As I stated above, owning the only 3+ morale is key for staying on the field, and they have the 4+ skill to match the Czechoslovaks and Poles. While the Czechoslovaks and Iraqis can bring more tanks to the fight, the Czechoslovaks suffer from lower ratings while the Iraqis bring an inferior tank. The Poles are very, very close in comparison, but that three point difference can get you another formation unit and also the Poles are going to be exponentially more expensive in other units as well which means projecting less overall force on the tabletop.

So, curl up with some good German beer, put on Sandmannchen, and celebrate the victory of the Worker’s and Peasant’s State.