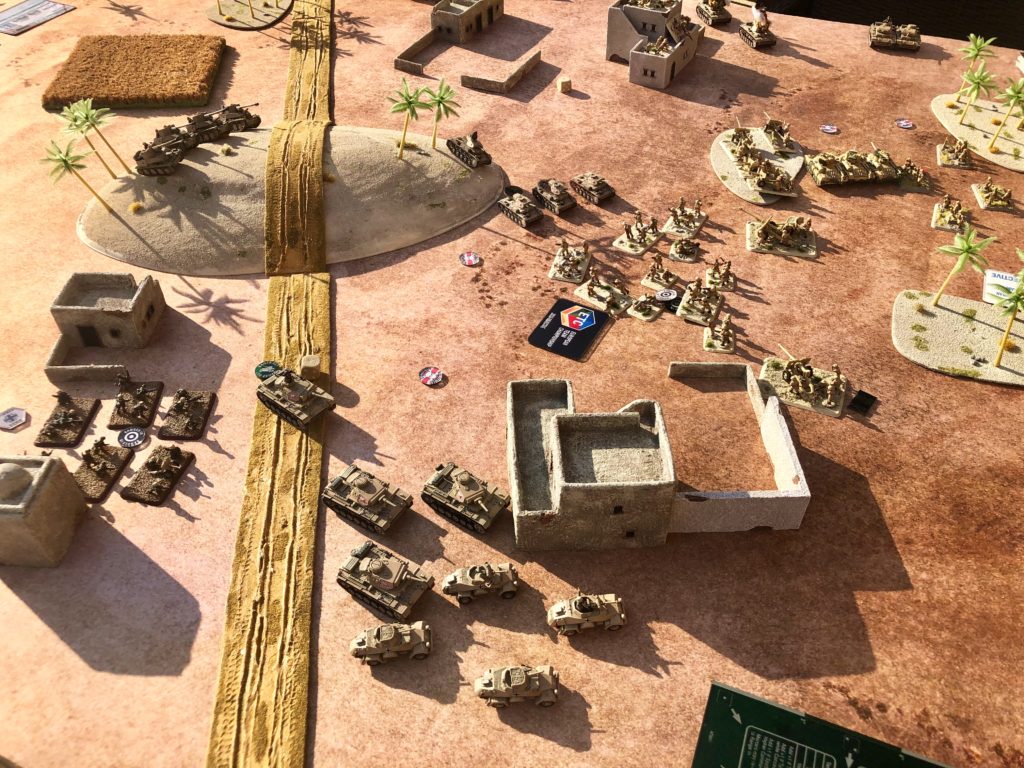 With the sun shining on Good Friday I managed to get a chance to set the board up for a game of Mid War.   Michael was to be my opponent, with his DAK vs my Rifle Company.

Interested in the new experimental missions and noting we hadn’t fought a defensive one in a while, we set up for Dog Fight.  This is basically no retreat but with delayed reserves which arrive as scattered from either the back edge or sides of the defender’s table half.  I gulped, 3 turns until rolling for reserves seemed daunting.

The 2 forces were 100pts and are as follows

The objectives were set up as ‘standard’ with mine central and my opponent’s off set to a flank and as far forward as possible.  I held the air support, carriers, and Churchills in reserve with the 6 Pdrs in ambush.  Michael deployed a tank unit on each flank with Marders in the centre along with his Panzer 2s.  The Infantry set up to head to the minefield.

The DAK pushed forward with the Marders taking the back end of the hill ready to blitz next turn and the Panzer 2s hugging the hill ready for an early assault.  Everything else pushed forward with the German infantry avoiding my ranged in marker.   The artillery ranged in on 1 of the 17pdrs and a load of inf with the single mortar from the infantry platoon doing the same.  The result was a single infantry casualty and everyone pinned.

In return  my Valentines took some shots at the flanking Panzer3s with no effect and a 17Pdr managed a bail.  The biggest event of my turn was dropping a smoke screen.  I needed to buy time and wanted to deny the artillery a clear shot for a turn (+1 to hit what you cant see).  The 6pdrs remained in ambush.

Turn 2 saw the flanking Panzers move past my building strong point and engage the Valentines with no effect.  The Marders blitzed onto the top of the hill but found no targets.  The rest of the force continued its advance and the Panzer2s readied for a cheeky assault.  The pressure was definitely on me.  Luckily due to the smoke the artillery only killed 1 stand of infantry but kept everything pinned.  The Panzer2 assault was hit back by a single 17pdr hit and a very lucky AT rifle which caused a bail.  I forgot how poor their side armour is.

The British revealed their 6pdrs splitting fire to the flanking Panzers by the building strongpoint and the other Panzer3s.  Combined with the the weight of fire from the Valentines only a single Panzer3 was bailed on each flank.  Most disappointing.  However using the sneaking up on tanks rule I got a 6 stand assault off with only 4 return MG shots from the tanks forcing them to break off and capturing 2.  That flank move was now severely disrupted.

The flanking Panzers continued to move along the flank behind some trees ready to threaten my rear objective.  Meanwhile the other Panzers seeing how long it would take to clear the minefield started their own flanking move around the buildings along with the armoured cars.  They didn’t want to go toe to toe with those 4 x 6pdrs.  The combined firepower from the 3 x Panzer2s and the Marders killed of 2 x 6pdrs (saves were not my strong point this game) and the armoured cars assaulted and killed a 17pdr before being driven back by the infantry.  Important thing I didn’t realize (Due to them being modeled with them). 17/25pdrs don’t have turnabouts and are forward firing.  Lesson learnt!

No reserves arrived for the me.  However to cheer me up the brave Tommies slaughtered the Panzer2s with their AT guns eliminating that assault threat and blew up 1 x armoured car and bailed another with the Valentines.  An assault by the infantry on the flank against the lone formation commander failed to kill him and he fled towards the Marders.

Turn 4 saw the Germans trade shots with the Valentines bailing one and and also killing the the surviving 17pdr as well as reducing the 6pdrs to a single gun.

Meanwhile the British manage to get 2 reserves and the Kitty Hawks scream in opening fire on the Marders bailing 3.  The Churchills arrive from the back of the board killing 1 and bailing another Panzer 3.  The valentines bag another.  Unfortunately its all to much for the Royal Artillery and the fearless 6pdr runs.

With the help of the formation commander all the Marders remounted but failed to bag a Churchill.  The flanking Panzer3s got on top of the rear objective but couldn’t assault the mortars off it due to the defensive fire from the Valentines.  However, in the center the 2 x Panzer3s assaulted and won, pushing my infantry back, some even into my own minefield (which luckily they didn’t set off). They are still contesting, just.

Its now or never for the British, they need some good kills and to go for a formation break and it could be done by killing only 4 hulls.  The Valentines even had 2 of them in the side armour.  It wasn’t to be though the Churchills all missed and even the Valentines were disappointing with only 2 hits resulting in a kill and a bail.  Again the RAF turned up bailing 2 Marders.

Knowing they were close to a break the Germans assaulted the British infantry, winning again and push them into the minefield.  As the screams of the Tommies fade over the mine detonations, the British fall back to a new defensive line.  8:1 to zee Germans.

It was a close game and which are always the best.  The British had some terrible luck with their shooting, but hey that’s the game.  The game again showed that aggressive movement and assaults is key.

For me Dog Fight needs some tinkering.  Its based on outflank from V3 but the scattered reserves element for the defender’s reserves make it extremely tough for the defender.  Had this been No Retreat (Same mission but with different reserve rules), my Churchills and Kitty Hawks would be on at turn 2 not turn 4.  Its certainly and interesting mission though, but I would like to see how it works with reserves coming on a single side picked after objectives go down.