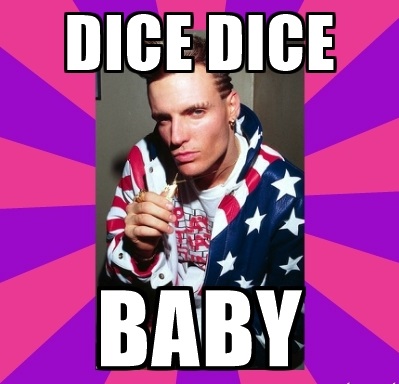 All right stop, grab a tea and listen, the Dice Baron is back with a brand new addition.
Cool looking wallets grab a hold of me tightly
I be rollin’ dem bones daily and nightly
Will it ever stop? Yo, I don’t think so
I be needing them dice with my unit logo
My luck is extreme, the TY rules I have a handle
Light up a 6×4 table and I’ll wax a chump like a candle.

Today, Duncan looks at himself in the mirror and sighs that he stooped to the lows of that intro and then picks himself right bacu up again to look at the new dice, Ammo Boxes and wallets for Team Yankee and Flames of War from the Dice Baron himself Adam Brooker at Dice of War.

Hi Duncan here and today I’m looking the new Soviet dice, Ammo Box and wallet set from Dice of War. I’m going to be using these for my Soviet hordes in Team Yankee but with V4 here (well near as dammit) and the introduction of cards you’ll be able to use them for both of the Battlefront core systems. I will get this out of the way early – I’m a Dice of War Roller*. I think that I have a set of dice now for every major Flames of War or Team Yankee army I have now… although thinking about it my Israelis for Fate of a Nation have been mothballed for a while now and I don’t think I have any corresponding dice for them. That is not an acceptable situation but I digress. On to the Soviet dice themselves. Dice of War’s tooling on their designs has always been excellent and the Soviet dice that I got are no exception. However they are designing and creating the dice their latest range seems to have taken the level of detail to a whole new level – the East German dice that have just been released are frankly incredible.

The detail on the Soviet dice is crisp and clear and the dice themselves have a nice heft to them in the palm. I believe that they are 16mm dice which are slightly larger than the 12mm dice that Battlefront released for certain units way back when – it will be interesting to see how they size up against the newer dice that are being released for Tanks or the new V4 sets.

The Soviet dice are Dice of War’s winter alternative colour scheme which I think sets off the colour palette of the Soviets nicely but that is a slightly art-sie fart-sie observation from my perspective only.

It is a tin. It holds the lovely dice that you have ordered.

But wait… there is more! They have been canny in their design choices with the Ammo Boxes – they can hold more than just your lovely dice! Inside there is a soft foamy lining which has ample room for your 16 dice and then more than enough to hold all of your game counters too (there is actually enough room for 2 sets of dice (32 – 16mm dice) with room to spare). The dimensions are again slightly larger than the previously released Battlefront tins that are as rare as rocking horse poo on the interwebs – I’m looking squarely at you Fallschirmjager set! – but as still comfortably compact enough to go neatly into you gaming man-bag or figure case.

The unit decoration comes in the form of an additional robust sticker that sits on the front case of the Ammo Box – part of me worry that the edges may get caught and lift or get damaged in some way but so far this has not been the case and they appear to have been stuck on with something like an industrial No More Nails.

To me this is the real gem of the set. I have, since starting with Team Yankee, been pondered the best way to safeguard my precious unit cards whilst still keeping them easily accessible for gaming. I had initial looked at Magic – The Gathering-esque card protector sleeves but whilst these protect the card they don’t keep them safely and tidily in one place. The Dice of War wallet does exactly that. I have 95% of all the Soviet boxes now and even taking into account the ones I am missing the wallet would have the capacity to hold the current Soviet range in one of its 20 plastic sleeves. Size is perfect for what we need on the table top, it won’t take up too much real estate and can even be slipped away in between uses effortlessly.

The plastic pockets themselves are, and I am being very picky here, a little too big for the cards. This is a tiny point and I only mention it because it upset my sense of English proprietary – “…But the card… it’s smaller that the pocket… oh blimey I’ve got to decide now where to line them up so that they all look uniform…” As you can see I chose the top right. It’s not really an issue at all and I imagine that this is due to the fact that the Battlefront cards are not a stock size.

Is it worth me writing this section?

I guess it is, mainly because the Dice of War dice, Ammo Box and wallet are a premier wargaming accessories. You are, probably, getting a bit more than you pay for in terms of the sheer quality of the product and with the flexibility to get bespoke designs made up you certainly have the scope to get exactly what you want even if it is currently outside the Dice of War range (and that is saying something). I would give the Dice of War an eye watering 9.5/10 Kill Rings for their dice, Ammo Box and wallet. I don’t really have anything terribly negative to say… erm… move to Europe? As the man himself says: “Surely victory will be yours with one of these!”