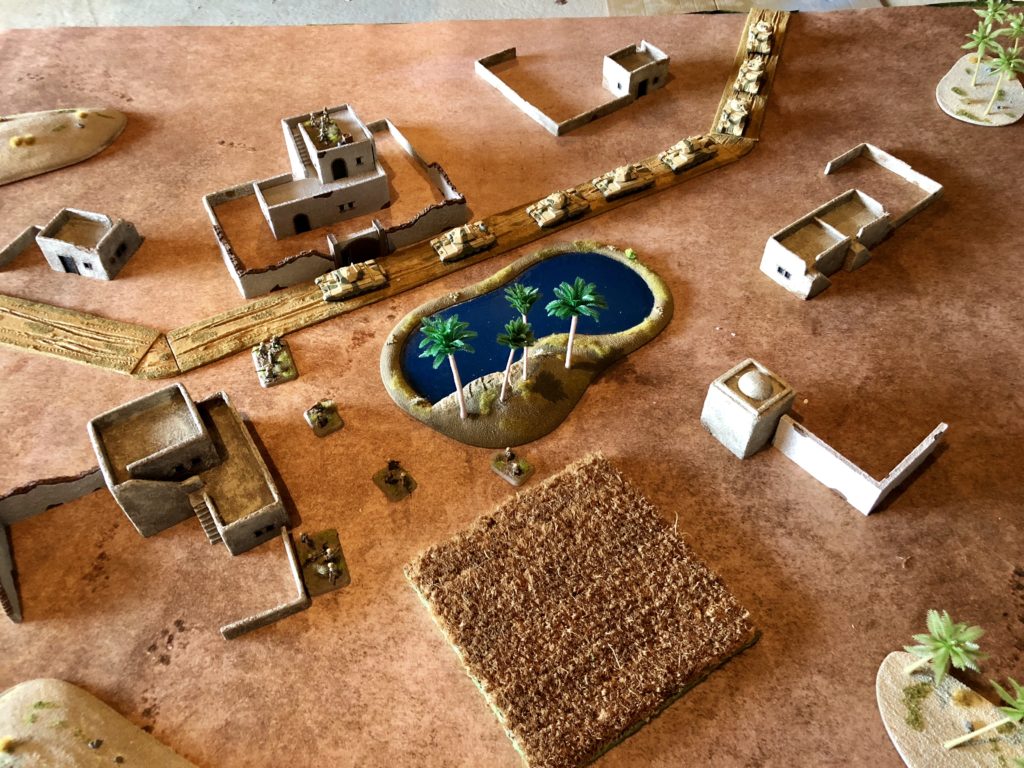 Today Mark G looks at how he goes about creating a table to ensure it has a logical but game friendly feel.

The importance of scenery

For me, the scenery is one of the most important aspects of the hobby. Something that got me hooked on FOW was the lovely tables.  15mm is just great for tables, its small enough to allow a large scene to be created but not so small that you can’t have nice detail.  I came from FOW from a 40K background and while I had nice Forgeworld tiles and buildings for my games, I was just horrified on the slap-dash boards people played with.

Since starting FOW I’ve gradually made sets for most theatres and weather conditions, be it Battle of the Bulge in the height of winter or the deserts of Tunisia.

At the UK Open Day, I picked up the final box I wanted for my desert terrain, the Oasis.  When I have a nice new piece of scenery I like to theme a battle around it to show it off.  However, the principle works for any piece of large scenery that you want to be a centrepiece for your game.  I thought id share how I work through creating a board to tell a logical story.

The Battle of the Oasis

First off you have to work out where you are fighting.  This board is Tunisia and focuses on an Oasis.

Here is where we start with just the Oasis taking pride of place. The mat is the new battle mat from Battlefront.

Next up I imagine this vital water source would have had a road or at least a track established to it as it became vital to the local population, Bedouin tribes and in WW2 the various armies in the area.

Next, I place some sand dunes/hills (note the palm trees are just for decoration and don’t impact the game).  It’s important to spread them around game wise and consider all possible missions.  E.g too many hills on one side and it’s too obvious for the defender to take it and rain fire down on the attacker.

Palm groves are added next.  With a water source nearby there is likely water near the surface in other places and some groves have grown up nearby.  Again these are spread out leaving space for the eventual settlement. A nomadic Bedouin Tribe has pitched some tents overnight overlooking the Oasis.  Again no impact to the game it just adds flavour.

With a reliable water source, a human population is inevitable and the start of a small village has sprung up. Notice the main building hasn’t got high walls all the way around so as not to make it too limited to play. Finally, by the time the allied troops arrive the settlement has started irrigating the land and growing crops to sustain them. You never know what famous adventurers may pop up on my boards!

I hope this gives you some ideas for boards.  I know people have lots of different ways of creating their layout, some place all the roads first or hills and then work from there.  However, if you have a nice bit of scenery you want to show off building a systematic and logical story around it can help bring your battlefield to life.