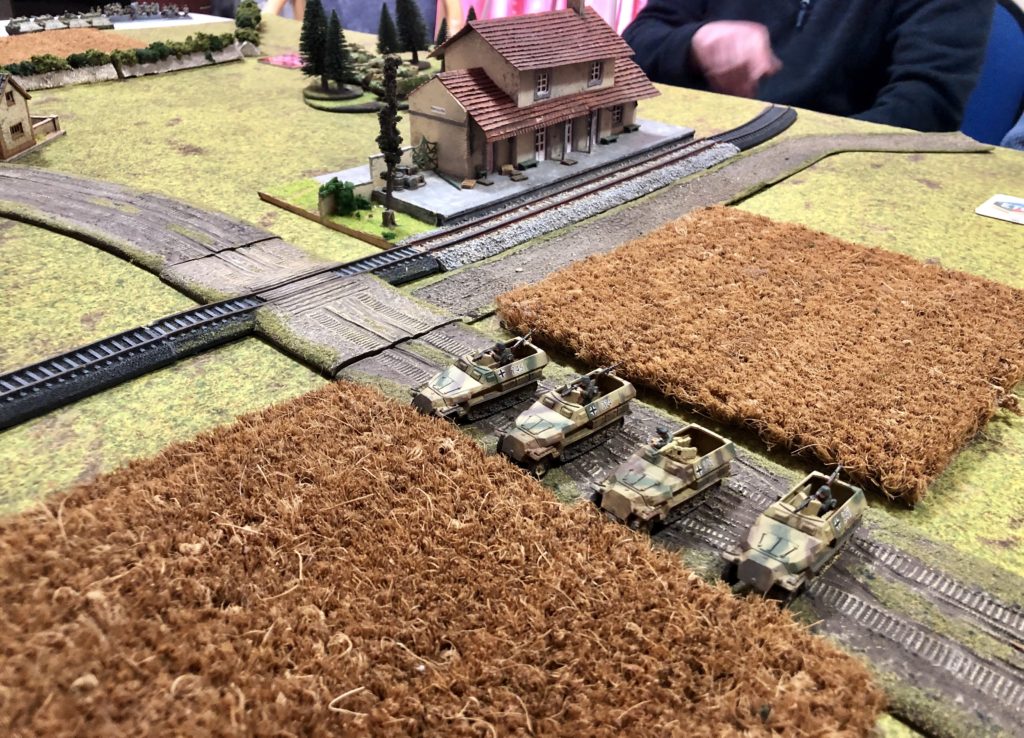 
It is a fact that under equal conditions, large-scale battles and whole wars are won by troops which have a strong will for victory, clear goals before them, high moral standards, and devotion to the banner under which they go into battle.

This week I got a chance to introduce Fortress Europe to some new FOW players at my local gaming club in Morpeth UK.  I was keen to supply both sides with a variety of forces and decided to try out the new Soviet Hero T34s facing off against their Fascist nemesis on the East Front as they set about opening the path for Op Bagration.  Both sides picked attack and Free for All was rolled, perfect for new players.

The Heroes of Mother Russia had the following:

This is a full Hero T34 battalion maxed out.  The tanks are now aggressive, trained and confident but have the sneaky rule giving 3+ tactics, brilliant for Blitzing.  The SU85s were far too expensive to really see on the table in Mid War but are well priced here and i’m keen to see how they do.  The IL2s are now trained so I am hopeful they will now range in.

The defenders of the Fatherland and the Third Reich are:

An elite force packing the same stats as Mid War i.e. Cautious Veteran and Confident with a 3+ last stand.  I could have mixed the platoons with two Panzer IIIs and two Panzer IVs but, given how expensive the Panzer IV was in Mid War, I am keen to seem them run out.  Two Tigers are a big threat, even the Russian AT12 will struggle at long range, and their 2+ remount and last stand will keep them fighting even if one dies.

While free for all doesn’t normally have reserves we played with with immediate reserves as it worked for newer players to have a slower buildup.  Deployed on the table were;

Hans raised the Binoculars to his eyes as he emerged from the cupola of his Tiger. He was in the perfect spot, hull down on a hill with the Panzergrenadiers forming up behind the crop field.  On the other flank he knew four Panzer IVs were nestled in the woods awaiting the Russian advance.  As dawn rose, he spotted the dust thrown up by the advancing Soviets, as four tanks formed up behind the woods to his front and another two platoons and what he believed was their commander stumbled towards the Panzer IVs.  The Germans would seize the initiative and attack.

The Armoured Infantry advanced steadily forward taking cover in the crop field, their commander radioed for tracks to follow him as he dashed across the road however the other tracks misunderstood and remained in cover.  Heir Hauptmann declared that his Panzers would go to ground hoping to ambush the Soviets as they advanced forward.

Meanwhile the Soviets looked to the sky as an IL2 swooped in unleashing a salvo of rockets into the far wood however as the dust cleared their was no evidence of damage, at least the enemy location had been given away.  The left most platoon of T34s dashed off, ducking behind the next wood before the Germans could sight and engage them, while the others provided overwatch and awaited the rest of the formation to arrive, ready to crush these Facists.

Knowing that the Russians were cowardly hiding and keen to take the initiative the Tigers surged forward towards a small out building in order to support the halftracks as they pushed to the center.  Again the Panzers bided their time, they knew how safe they were in the forest and would ensure that their opening volley counted.
The Soviets seeing the approaching reserves in the form of the SU85s saw a chance to end this engagement quickly, opening the flank with the destruction of the Tigers.  While the SU85s took up position behind a crop field  while the nearby T34s sneakily blitzed out from behind the woods, using the full speed of their reliable engines to push forward to engage the Tigers from the front.  Meanwhile on the other flank their commander oversaw a similar blitzing tactic for the other platoons with the center one taking up position near the barn allowing the 85mm T34s to also engage the Tiger at extreme range.  The left flanking platoon advanced behind the hedge to occupy the Panzer IVs.  Alas bravery and sneakiness can’t mitigate poor aiming and, after the dust settled, not a single German tank was ablaze; hardly any shots had found their targets and those that did bounced off.

While the Tigers had weathered the storm the Hauptmann knew they were now vulnerable, perhaps he had been too rash advancing?  Luckily the next Zug of Panzer IVs arrived and went immediately to support the other Panzer IVs. They had to gamble that the Tigers could hold while the Panzers swept away the T34s and pushed towards their objective.  The Tigers blitzed  forward and took up position next to the out building limiting return fire from the SU85s.  As they unleashed their deadly guns a T34 85mm brewed up, while on the other flank the combined fire of 8 Panzer IVs killed 2 x 76mm T34s and bailed both 85mms.  The armoured infantry continued to press the objective adding pressure to the Soviet position.
The Soviets cheered as their IL2s dropped from the clouds and unleashed another salvo on the Panzer IVs sitting easily in the open, however their cheers dissipated as the rockets missed.  Words would be had with their pilots.  The bailed out T34s remounted thanks to encouragement from their commander while the Valentines arrived to support the objective, engaging the halftracks, bailing one and shattering another.  The SU85s relocated and bailed a Tiger with fine shooting that couldn’t be replicated by the T34s who once again disappointed Stalin and failed to kill anything.  The commander begun to consider the possibility that German spies had sabotaged their sights.

The Hauptmann had endured enough and decided he needed to finish this as he advanced on the hill from reserve, bailing a SU85 with a well aimed shot.  The crew of the Tiger knew their only hope was to keep fighting and remounted, blowing up a T34 and bailing another.   On the other flank the newly arrived Panzer IVs sensed the tide was turning and continued to advance, bagging a 85mm T34 while the other zug bailed another.  The Nebs were dropped off by the train station by their transports and finished prepping their rockets for the first barrage.
The Soviet commander knew something decisive had to happen and that they could only advance.  The left flank continued to engage the Panzer IVs, still failing to land a kill, but on the other flank the SU85s bagged a big cat while the flanking T34 85mm claimed another.  He thanked the extra crewman in the 85mm turret; its reduced crew workload allowed more effective aiming on the move.  With a cry of “Urrah” the infantry arrived and dashed forward to threaten the remaining halftracks while the Valentines bailed another but the 6prs went wide of their mark.

The right flanking was collapsing and the Hauptmann knew he had to stop the advance on the objective for now.  He blitzed forward, advancing on the crop field to cut the T34s off.  The other flank advanced on mass; these poorly trained peasants had held up the Reich long enough!  The final T34 of the center platoon was destroyed. However, the same sight issues affecting the Soviets seemed to strike the other Zug.  The Hauptmann’s tanks bailed a 85mm T34 and he had to hope this would be enough to hold them up.  The infantry dismounted onto the objective mowing down the Soviet infantry in the process.
Bravery surged through the Soviet force, who all remounted their tanks.  The remaining pair of T34s by the crop field stormed behind the Hauptmann’s tank, blowing it apart and bailing another as they passed, finishing on the objective. The SU85s relocated but couldn’t land the killing blow; the Hauptmann would live another day.  Seeing the German infantry in the open,  the Strelkovy advanced while a pair of Valentines assaulted the position.  The Germans were down to a single section but drove the assault back, capturing a Valentine in the process.  Once again the T34s on the left flank under performed bailing two Panzer IVs.

In a last ditch gamble the forward Panzer Zug moved onto the objective, shrugging off their bails while the rest flanked the Soviets.  There was little that could be done about the T34s on the German objective due to the Hauptmann failing to remount, he had to hope that the Nebs could push back the coming assault.  If they did the day would be won.  Alas the the Nebs fell back as the T34s advanced and with that the German line collapsed, just as the half a Zug engulfed in flames on the left flank as the Soviet gunners found their mark.   The last sight the Hauptmann saw was the 6pdr Valentine firing at him as his world erupted into fire and smoke.

What a great game, it swung back and forth constantly and came down to a single counter attack role!  The left flank caused massive headaches for the Soviets showing how hard it is to kill Cautious tanks at long range, however, both sides suffered from terrible to hit rolls.  Those Tigers took a lot to bring down and knowing that they and Panthers will definitely be seeing the table in good numbers, those SU85s are going to be a constant feature in my army.  The 85mm T34s lack of overworked makes the mobility of the T34 really matter and the 3+ tactics enables a 16 inch move and engagement making them a big flanking threat.
The Germans felt elite and reliable and to be honest all players felt the game balanced really well.  Air support is easier to range in but can’t mitigate the 4+ to hit.  Again I still like them, they can change a whole game in one rocket salvo.

Next time the Americans will be taking the field vs a armoured panzer grenadier force, the question is whether to support with Tigers or Stugs…