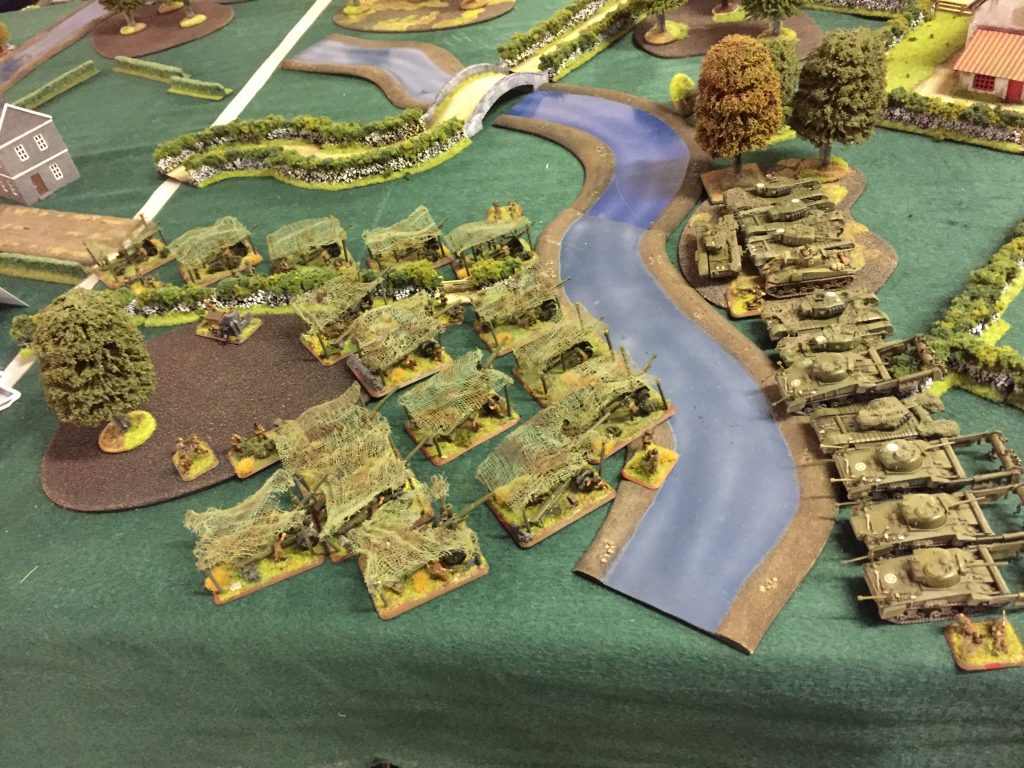 The largest tournament in the UK (maybe Europe?) was held the weekend before last and Mark was on hand to test out his 2nd Armoured Force.

Corrivalry was the first tournament I ever went to so it always holds a special place for me.  It’s widely regarded as the most competitive event on the UK calendar and attracts players from across Europe.  This year it was held at Battlefield Hobbies, which also meant I was blatantly going to succumb to some impulse buying in the shop! (Who doesn’t need another 10 BMPs).

The tournament was limited to using 1515pts with a swap out allowed.  As I was practising for the ETC in August so I decided to skip this and just take the 1 list, The key to this list is the gun park.  Four templates or a cheeky AT5, FP4+ pie plate that can re-rolling misses, ‘backed up’ by seven FA9 Churchill tanks with five Shermans for direct fire smoke and digging out infantry

Fighting Withdrawal vs Andy Cartlow’s Tankovy.  Fighting Withdrawal is a tricky one for this list, especially when facing 20 T34s and 6 SU100s!  8 turns just isn’t enough time for the guns to do their business.  Andy played it brilliantly staying GtG and forced me to come forward.  While I managed to keep the SU100s smoked for pretty much the whole game and see off half the T34s, I just couldn’t get it in 8 turns.  This resulted in a 4:3 to Andy. The Shermans held up surprisingly well for trained FA6!

Corrivalry is a bit different to most events in that it includes several different ‘non standard’ scenarios such as Roadblock and Breakout.  While in my humble opinion Roadblock is a nice ‘fluffy’ fun mission, it is rather ‘rock, paper, scissors’ depending on what you run.  Luckily my Chruchills would be ‘attacking’ British infantry that had to run towards me in daylight.

Mike Parker had this unfortunate task and prudently set up an armoured troop of two Fireflys and two standard Shermans in ambuscade, with a Churchill platoon as their target.  I also had five Shermans and another three Churchills on the road.  Unfortunately his tanks whiffed and only killed one Churchill, bailing another.  Luckily they held and I remounted.

The return fire was pretty brutal; I killed off the ambuscade, even getting a Firefly with a flank shot as the 25pdrs came on.  My next target was his breaching group.  If I could get that, then he would have no AT left and I could just sit on the objective and whittle him down.

He chose to engage at long range, with his Shermans choosing the re-rolling misses (good idea).  He knocked out a couple of Shermans before my combined firepower came in and blew him away.

On the other flank I was taken by surprise by the 50cals on the Kangaroos and almost lost my carrier section; however the platoon commander held on and heroically hide for for the rest of the game.  A platoon of 5.5 inch guns also got wiped out by them as they arrived from reserve with no gun shields.

Mike pushed as hard as he could but the sheer amount of defensive fire was just too much for the British and the attack stalled.  They were soon wiped out.

The game ended with a failed company check for a 5:2. The Churchill’s rush to the right flank to add defensive fire.

This time the mission was Breakthrough vs Steve Charlton’s night fighting panthers.  Unfortunately for him, he lost the dice off (both of us are auto attack) and he was forced to defend.

What I definitely learnt was that the army struggles to fit into the deployment zone. Imagine the noise of that lot!

Steve hid for the start of the game with his 4 Panthers, letting me slowly advance over constant bog checks due to the number of hedges.  Oddly the crabs are really bad at this, being overloaded.  You would think they would just chop their way through.

Steve left his Company Commander in the open to start whittling down the Chruchills, but, after bouncing three bombardments, surprised us all when it brewed up to 25pdr battery.  One down, four to go.

As I approached the objective, the Panthers pounced but failed to hit, and my 5.5s came into their own, destroying two with a double bombardment.  Now there are two.

Advancing under direct fire smoke, I got onto the front objective with my carriers coming on from reserve to threaten the back objective.  Due to the scenery, I had to put the objectives close together and this meant a single panther could contest both. Pesky!

More arty rained in and eventually claimed the other two.  By this stage his Ostwinds were in the flanks of my guns gradually carving them up while his ‘flying circus’ of light vehicles, including wheeled pak40s contested the objective.

Being able to disengage and unable to hit them at long range, he managed to dance around long enough and the game timed out, for Steve’s 4:3 win. 5.5s vs Panthers.  There would only be one winner of that. Despite getting all over the objective and not even losing a platoon, I just couldn’t get rid of his recce in time to take the objective.

Day Two started playing Battlefield Hobbies’s very own Jack Penn.  He is new to FOW and was testing out a rather nice IS2 list.  Seven IS2s at 1515pts is not to be sniffed at, especially with a full ‘God of War’ and infantry platoon in support.

He was defending in Cauldron and a set up the ‘God of War’ covering both objectives and four IS2s including the CiC.

Worried about my Churchills attacking from his rear (the only way they were really going to hurt them) he focused fire on them and wiped them out in two turns.
Much to his surprise though the CiC and the Churchills kept forward and assaulted the God of War disputing both objectives on turn one.  His ‘God of War’ platoon commander rushed to one objective while his CiC disputed the other.  I went ‘gone to ground’ with my Churchills platoon and assaulted again with my CiC killing it off the platoon commander and meaning he had nothing in range to take back the objective.  Another 5:2 win to me.

Jack learnt the lesson we all do at some point when we were new to the game.  As the defender in cauldron you have to be very careful about being assaulted on turn one.  The random deployment can combine with scenery to create some great attacking opportunities.  Had he deployed with seven ISs and protected his flanks I think it could have been quite different especially as his infantry would come on and start to roll up my gun batteries in their own assaults. Turn 1 and the Churchills assault into the guns capturing 1 and disputing the objective. On the other side of the board the CiC storms the objective and consolidates into the smoke laid down on the now dead gun. The left objective was taken just in time.  I didn’t fancy dealing with 4 IS2s!

The final game of the weekend was another Battlefield Hobbies’s legend, a true gent and someone I’ve always wanted to play, Nobby.

We would also be playing on his rather nice and incredibly hilly Italian board.  I was attacking him in Hold the Line.  Facing off against a ambush of four tank hunter Pak-40 RSOs and three Panthers. I had to get on with the attack and hope for the best.  I made a massive mistake by not sending my recce up the mountain pass which would have stopped the Pak40 RSOs claiming it with their ‘shoot and scoot rule’.  I also should have hidden my Churchills in the wood.  I think I got too fixated with charging the infantry quickly to take the objective.  Again my 5.5s did me proud and destroyed two panthers in one turn while the the 25pdrs bailed another, causing them to flee.

This is the first time I have seen anyone play Sturmtigers and two lumbered onto the board from reserve.  They proceeded to get direct fire smoke for the next few turns as they closed on the objective.  I bravely hide my CiC and 1 surviving carrier in the wood contesting the objective.

His RSOs finally failed a bog check and I had a target.  For the first time in the event, I got out my pie plate and rolled to hit – four guns and three stands of infantry.  All missed!  By this stage he was popping out and blasting apart my 5.5s, I fired again, this time breaking the platoon with a combination of bombardment and direct fire from the 25pdrs.  Alas, time run out and the one surviving Sturmtiger was still holding the objective.  A great game which was surprisingly close.  4:3 to Nobby. That is a LOT of guns Smoke is this armies best friend. The game ended with him just hanging onto the obj

Another great event at Battlefield Hobbies.  While I was disappointed with three losses (my worst result ever!), I take solace in the fact that if two of the games had gone longer (as they are at ETC) they would most likely have gone my way.

Some more practice is needed and maybe a few tweaks as well.

Once the lists are submitted Breakthrough Assault will be showcasing some of the UKs entries this year, so stay tuned.