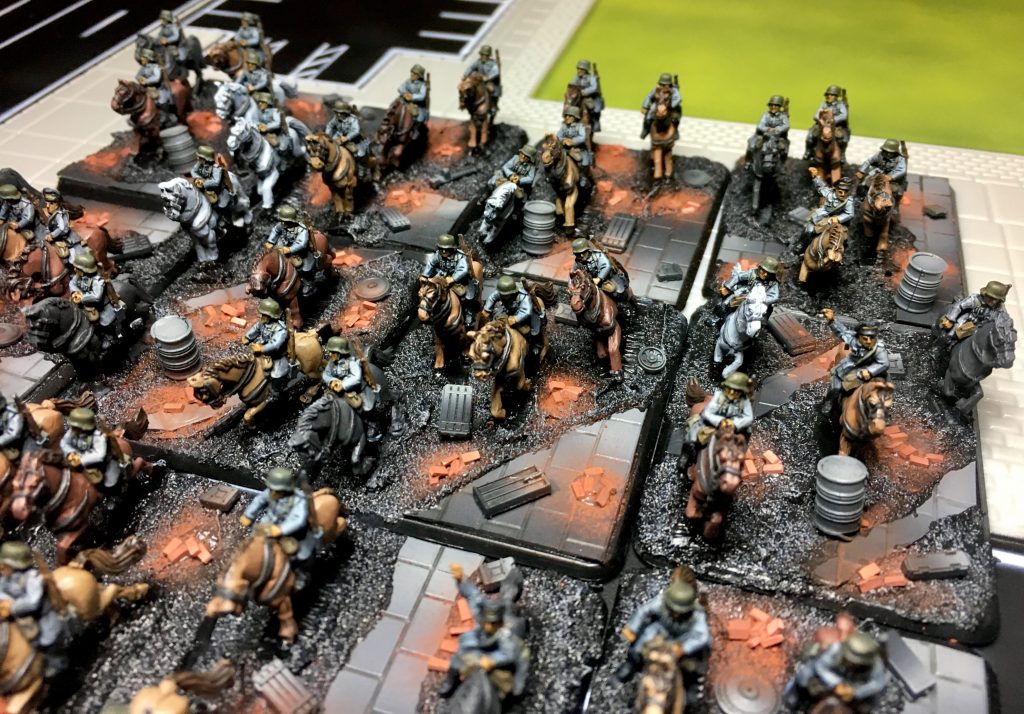 Today, Coxer follows on from last week’s look at German cavalry be reviewing the Skytrex German Cavalry that he used to fill out the ranks.

So I’m back and I’m doing cavalry… Firstly I didn’t find a great number of options for German cavalry, Battlefront don’t do it, but I found both Skytrex and Peter Pig did.

Peter Pig works out at £3 for 4, whilst Skytrex is £1 a model. Having a look, I thought the quality of Skytrex was better, and also it appears the Pig models are one cast, whilst the Skytrex it’s a separate horse and rider. I also saw a friends Skytrex polish cavalry, and in the flesh they looked brilliant so went for them. The castings themselves seemed pretty good, some flash, some lines, but nothing excessive. I was slightly disappointed there are only 3 rider sculpts, when you need 60 riders you kind of hope for a little more variety! There were more horse sculpts, but I guess they’re not nation specific! The models are also true scale 15mm so the equipment, etc, is smaller than BF standard and closer to PSC – which is no problem at all.

The riders were a joy to paint, with enough details to make them interesting. The faces, hands, etc, were nicely defined, and the equipment seemed appropriate. The horses too are nice sculpts.  It’s hard to compare as I only have Battlefront’s horses from their limbers to compare against, but the Skytrex ones seem more lithe and dynamic. I’m not entirely sure how many poses there are but think there are five.  I did get a few bits of flash and tags, but nothing major and no poor sculpts either. I painted the riders as I had my infantry and so I won’t bore you with that process, for the horses.

Well I realised early on I needed multiple different colours of horses, someone posted this picture which I used as a reference – but with 60 horses simplicity was my watchword!

All of these then got a zenithal highlight of the base plus grey/white/sand as appropriate. After that the chestnut and brown horses had their hair painted German black brown, then drybushed flat earth. I then painted all the eyes black brown, and all the bridle straps grey rubber. With that it was a layer of varnish and a thinned down wash (black/grey/brown) as appropriate, then paining the tabs and hooves black, before attaching them to the bases. The bases were done the same way as my infantry. I attached the riders before adding the dust to get some on them ‘naturally’. Move 10 – can’t ever complain about that!

Advance at the Gallup in shooting step – instead of shooting you can pass a skill test to move another 4″, and as they are German can then storm trooper for another 4″! And you might as well, as shooting while mounted only has a range of 4″.

Two downsides to cavalry are them not being concealed in the open unlike normal infantry, and more famously – they can’t assault tanks!
On attack vs infantry/guns if their opposition breaks off they are automatically destroyed! And to top it off cavalry gets a reroll to being pinned!

So there you have it the cavalry! A lovely model all in all, but with this many a real challenge to paint!