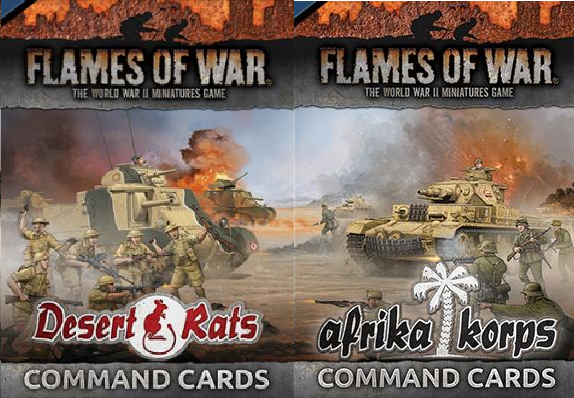 We at Breakthrough Assault got an early look at the Command Cards recently and today we have an overview for you, including a look at what they are and what they include. We’ll take a look at the rules for Command Cards and what we can all expect going forwards as we believe there will be more decks as future releases occur. Battlefront have a preview here too. They’re pre-orderable for a few pounds.

Firstly, its important to stress that these are totally optional, fully pointed, and they let you do many exciting things with the army build.
New alongside the national Command Cards are Fog Of War Cards which allow us to play entirely different games based on the Dust Up and Free for All missions. We’ll come to those later which we will also cover very soon.

So lets start with the rules for National Command Cards:

They’re nice and simple to use, so much so that how to use them is on a single card which lays out how you use the cards in conjunction with the books and models. The card explains they can be purchased in two ways, either within the normal points cost of a list e.g. within 100 points or as an extra points total for command cards: e.g. 10 extra points solely for Command Cards. If a card is “Limited” you may only have one of it in your entire force, otherwise you may buy the same card for multiple formations. The notes state you should put the card next to the associated unit; however, you can just as easily make a note on your army list or have a separate space with your reserves where the cards will sit, as long as it is clear which cards go with which unit.
The next three key rules explain the aspect of the army the card refers too from whole Force all the way down to unit. The remaining rules are changes to the list build and include build options and warriors. We knew in advance there would be armoured car formations in the command cards and they are examples of what we can expect going forwards.
We aren’t going to go into full lists of cards here or lay out everything in the deck as we will be doing further blogs on each national deck and Fog Cards but lets take a look at a couple of examples.

Here are four German Cards “Charmed Life” lets you automatically pass a single save which is great for that situation where targets were not mistaken or you have a difficult save to make.  It represents that lucky moment on the battlefield.

“Mission Tactics” help you spread out that German leadership and automatically pass a ‘last stand’ test inside the formation. Good for when something has gone wrong and you don’t want to take a risk with the dice.

Now even though I have blanked out the costs… the next one is expensive… but if you’re going to buy Tigers you can buy cards that let you replicate Tiger Ace Skills from Third Edition. If I had a additional points allocation for command cards I’d certainly consider making that Tiger even better.

Lastly a warrior who I used to take in Version Three. Shooting and Scooting buffs and re-rolls to hit mean I may take him in a Panzer IV Long still.

Here is a taste of the British Cards, again another article is incoming in more detail.

An example of a card that isn’t limited is Sticky Bombs, by taking this a couple of times you can ensure your infantry and or guns can give an assaulting tank unit a surprise.

King and Country may be a useful card for when you gamble with those Honey hoards and Crusader charges and your opponent carves up a few platoons that really want to ‘Live Another Day’; it may keep your aggression moving!

The last two are alternative builds for Infantry and Tank Companies from Desert Rats. These card means you wouldn’t need to add pages to the book and can easily have all the rules provided on a card.

So look out for more from us at Breakthrough Assault on these cards as we discuss them, try them out and use them in a few battles!thanks for reading!