It’s Jersey James here today, but instead of
talking about my Italians… today, you can call me Charlie! I’ve swapped breda machine guns and black feathers for sandles, straw hats, RPG’s and AK47’s! 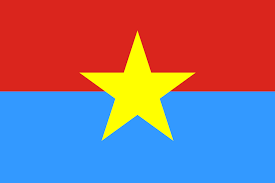 I’ve been army list crunching, building and painting a PAVN
Local Forces Battalion for Flames of War Vietnam and it’s all I can do not to
run through the jungles and elephant grass or crawl through tunnels to get into
the mind-set when painting and planning! I might have watched twelve Vietnam or
Vietnam themed films and ordered a few books about the PAVN too; as I mentioned
on the Breakthrough Assault Facebook Page the other day… Forest Gump alone made
me head online and buy more models!

As we mentioned in our first blog post about this challenge,
this whole project started because of an email conversation in which I happened
to mention that I liked the Local Forces models on the day when the HQ box and
Company PDF were released by Battlefront. It didn’t take me long to draw up a
list and place an order for a box of models and was really excited when they
got here on Christmas Eve!

I enjoyed putting the models together so much that during
quiet time on Christmas Day I painted the first three teams of my collection on
the sofa whilst seasonal programmes were on and dinner was over. Since then I’ve
slowly worked on them, doing a few layers of paint every evening due to a new
job taking up more time, but the models have slowly come along.
As part of my research I came across several good reviews of
the Local Forces Company, including this one on WWPD. I agree completely with
their review.  The quality of the models
is fantastic and there were very few mould lines and flash to remove.
Occasional lines on the straw hats did cause a small issue but otherwise these
were fantastic models to prepare and build.
There are a lot of them in the box too. Add to that all the
options you need build the support weapons and twelve local resistance models
and you get a lot in the box!

Painting these models was fun too, they’re very different to
the other 15mm figures I’ve painted before and have very distinctive features
in brighter colours. This makes them quite easy to paint and the models pop out
at you! Starting from a black basecoat I highlighted the whole black model with a dark grey blue before adding details, washing everything in black and re-highlighting the details.

I went for a simple static grass and tuft basing scheme with
a brown rim on these models to represent them lurking in the undergrowth. Other
special models may be based slightly differently, such as the sniper team, Đặc
Công and observer team to help them stand out as special (because almost all the
models in the army look alike). So, I hope you’ve enjoyed reading this post and if you have any comments, especially about the list and my choices then please add them. I’m completely new to Flames of War Vietnam!