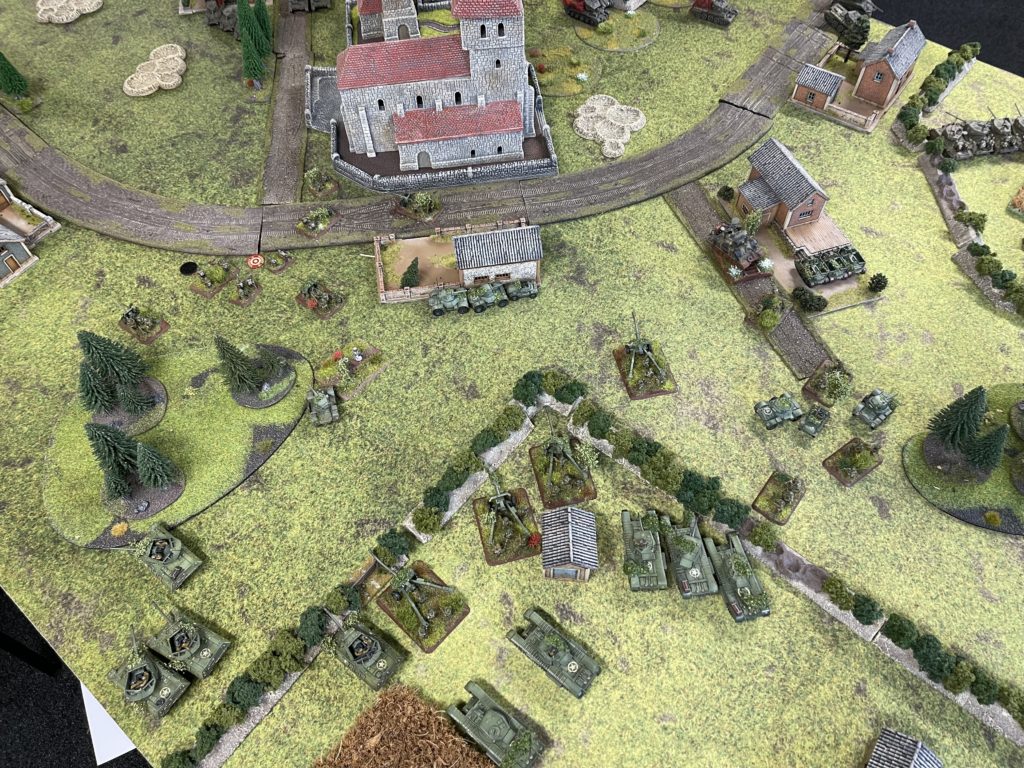 Bin-ing-Grad is a regular UK event run by the ‘Bun Shop’ gaming club at Battlefield Hobbies.  Unfortunately it was cancelled last year for COVID but was back in force over the weekend of 26/27 June.

The format of the event was 18 players split into groups of six players (UK COVID regulations) for fve games of 100pt over the weekend.  While you play each other player in your group you would be ranked against all 18.

Keen to allow people to field all the new toys painted in lockdown we were allowed to bring a completely different force for the Sunday.  After a huge amount of deliberation here is what I went with.

I chose to have the British for the Saturday (three games) with the Soviets on Sunday (two games).

Hammy chose Attack vs my Defend and we ended up with No Retreat, which I was pretty happy with.  A line of minefields cut off one flank to the Church limiting his lines of advance, compounded by his lack of infantry to clear them.  I deployed far forward to force him to push me back before turn 6 and kept the 76mm Shermans in ambush, with the M10C Achilles, Churchills, AVRE and three Carriers in reserve.

Hammy split his force but weighted it towards the minefield side! I could tell something reckless was coming.  Realising that the mined flank was left open, with the 17pdrs and 6 pdrs covering the other side, he went for it with two platoons, suffering a death and bail on each.  Long range 17pdr shots and the Shermans dealt with the survivors.

On the other flank the 6pdrs and infantry suffered two bombardments every turn but watched another unsuccessful minefield cross on the far left flank, leaving just a Firefly to the mercy of my four Achilles as they arrived from reserve.

As we reached Turn 6, Hammy was a last stand test away from a formation break for a 8:1 victory for me.

We both agreed in the after game chat that he should have chosen maneuver as his stance; he had the speed for it and, while still tough, the missions would have favored him more.  We also debated whether he would have been better off mobbing my 6pdrs with a frontal assault, while using his two smoke bombardments to limit ambush and 17pdr fire and get onto the objective.  Still tough, but perhaps would have worked better.

Game 2 – Free For All vs Jim’s Soviet Recce

With first deployment my recce managed to push forward and, rather nervously, I managed to draw out the ISU152s and place my 17pdrs quite far forward to dominate the centre.  His infantry was massed to the left against my 6pdrs and Motor platoon, supported by the Achilles.

Jim got 1st turn and pushed the left flank, moving aggressively.  However, unable to bombard on turn 1, he inflicted no damage.
I quickly managed to kill the T34s and started to knock out the ISU152s with the 17pdrs.  The SU100s fixed my Churchills, who were forced to hide behind a central building, while my AVREs relocated to squash some infantry.  The Shermans gradually moved up the left before swinging to the center, gradually whittling down his SU76s.

Despite his best efforts there was just too much defensive fire for his recce troops to get close and they were soon being hit by the AVRE in the open.  The SU100s struggled to relocate with their 5+ cross as my recce units mobbed the objective to claim victory 8:1.

The final game of Saturday was vs Graham Klaka and his German Recce, backed up by a formation of Finish T26s.  I wasn’t looking forward to this force.  A lot of cautious hulls, supported by a pair of SS Tigers, Nebelwerfers and four 88s.  We also ended up with Encirclement, leaving me very exposed in the center with two minefields to my front and the motor platoon and 6pdrs very much holding the line.  With so many axis hulls on table, I kept the 76mm Shermans in ambush and the 17pdrs on the left flank, supported by the Damilers to dissuade any sneaking recce attacks.

Graham pushed forwards hard.  However, my turn 1 changed everything as the Achilles arrived from scattered reserves (on the right side of the table!) and scored two hits on the Tigers, scoring a single penetration but failing its firepower test.  The lucky card was deployed, successfully rerolling the firepower, brewing the Tiger  up.  The remaining big cat ran away on double 1s, even with the formation commander near-by!

His T26s lost a platoon to the 76mm Shermans ambush (moving with stabilisers) and the 6pdrs, who actually rallied from the Nebelwerfers bombardment, despite being reluctant!

Graham weathered another turn of fire and started to pick away at the 6pdrs but, with his Nebs pinned, he had no option but to go for it.
The Finns charged in, only to get 3 hits and be forced back.  They were quickly finished off as the Churchills arrived.
His main formation suffered from terrible luck, a 82mm mortar bailed an armoured car, it then failed to remount and the other fled!

The final killing blow was given to a 76mm Sherman as it broke the formation for a 8:1.

Sunday saw me switch to the Soviet list and in hindsight I wish I stuck to my Brits given they were doing rather well.  I was facing Keith and his British Rifles.  Stan Hollis led them, making sure the infantry rallied on 3s, with the support of three Crocs and eight Achilles.

The most important moment of the game was the dice off to see who attacked in counter attack, he won.

With the IS2s, Chuchills and 82mm mortars in reserve, I deployed ready to to face a lot of fire power.  Keith is an excellent player and used his recce to get to a wood near the objective and occupied it turn 1 with his Achilles, who now covered my reserve arrival area on a very open board with 16 AT14 shots.  Needless to say my tanks were turned to scrap.

My Panthers ambushed and only bailed a Croc who promptly remounted.  A blitz saw two of them flank the Panthers (misjudged that!) killing one and bailing another.  His infantry then bailed the final one in assault, resulting in them all being dead along with my hope of stopping his Crocs.  My infantry pushed forward, with one even flanking a Croc and destroying it with a RPG (man of the match there).

I got into assault with his infantry who broke off with two casualties.  My mortars rained down on them but couldn’t quite get them to the break.  In the mean time my Zis2s had claimed his Wasps and started to relocate to target his Kangaroos for a point, along with the Churchills (their one act before they died).  I got them to a last stand which he passed and he withdrew them to deny me a point.  Knowing that I was really fighting for a 3:6 he moved back out of firing arcs and, at turn 6, I was on a 1:8 loss, thanks to his excellent play.

A double hedge road was the main feature of the board and the Finns ringed the objective with mines and had a massive hill dominating the whole board from his reserve corner.  I expanded my deployment with the Panthers, weighting the armour to center table with a platoon of infantry tasked to use the trees as cover and clear the minefield.  A further platoon of infantry was on the other flank to threaten Jay’s panzerfaust packing AT unit and fix his five T26s with the Zis2s.

I quickly pushed forward with the IS2s and Churchills whilst the Panthers set up hull down on a hill.  The Churchills assaulted his SMG platoon on the objective but failed to counterattack and lost two Churchills to bog checks!  Not a great start.

Jay pushed his BA10s and T26s forward and punished my hero moto rifles, who were forced to dig in.  However, this exposed his paper-armoured tanks, who started to take casualties to the Zis2s and also the Panthers, who engaged those who failed cross checks into the wood.
My other infantry platoon survived a lot of artillery as well as MG fire and (just) managed to clear a minefield before bravely retreating back into the forest on a last stand, ending the game with a single stand but stubbornly not fleeing.

My Churchills eventually died to the combined fire of his StuGs, two Pak40s and three T34/85s. However, I broke his tank formation and the T34s fled along with the remaining Pak40 after a few turns of punishment from the 120mm mortars.  With FA 9-10 vs AT11 at long range I was firmly on the objective for a final 8:1 win (but pure fluke it wasn’t a 7:2 due to break tests).

With 33 points I managed a respectable 3rd place, beaten by Keith from game 4 with 34 points, but victory to Paul Stovell with 38.  He took the top spot with US Rifles supported by three Crocodiles.

Thanks to Graham Willmott, assisted by Graham Klaka, for organising, Hammy for the wonderful Battlefield Hobbies venue as well as all five of my opponents for the great, well fought, games.  Finally thanks to Battlefront for the prize support.

The next event will be September with a 100pt MW event, including new points for many units.  Watch this space….