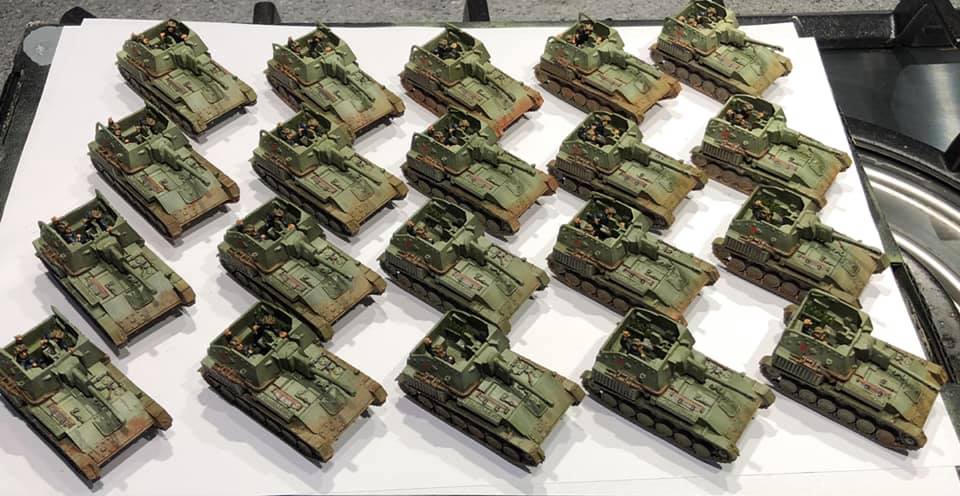 Today Mark brings us an after action report from the recent Bun-in-grad tournament.

I recently had the pleasure to attend the FOW MW 100pt event Bun-in-Grad held by the ‘Bun Shop boys’ at Battlefield Hobbies, perhaps best know as the home of the biggest FOW events in the UK.  For those who don’t know, Battlefield Hobbies is centrally located in Daventy and is one of the biggest stockists of FOW, as well as pretty much any mainstream game.
The venue is run by Nobby and Hammy, two pretty passionate, long-time, FOW players, so it was great to get a chance to go back and meet up with the usual faces and some new ones.

The event was an “open book” (where you bring what you want from any book, rather than restrict to, say, just Africa), 100pt affair, opening up all sorts of potential lists from each theatre.  The only difference to the normal game was that we would not be using battle plans.  Instead, a mission was selected by the TO and everyone played it.  Player would choose attack or defend and dice off if the same, or for meeting engagements as well.

In order to not disadvantage tank companies (who may be forced to defend) too much, a rule was added that when defending with deep reserves you could deploy one FA3 (or aircraft) unit but once all other units were deployed you could deploy more armour up to the 60% limit.  This meant if you only had one platoon that wasn’t armoured you got more than two platoons on table.  By and large this seemed to work well, but did cause a few situations where a tank army actually wanted to defend vs infantry because they would get 30 tanks on table including 10 in ambush!   Below is a few pics from the day.

Turn out was 24 players and it was fantastic to see new faces.  I actually played  players i had never played before.  This is great news as the UK scene recovers after the drop at the start of V4.

Runners and Riders were (note you could bring an Axis and Allied list if you preferred red on blue).

I decided to field a SU76 formation, I have never tried something like this before but looked good on paper and gave me loads of toys to play around with.

Lewis’ grenadier force was gun heavy with PaK-38, PaK-40, three platoons of infantry and some mortars.  As a static army, it went on the “defence”, deploying Pak40s, Pak38s and infantry.  I won the roll for first turn and rushed the T-70 for the left objective whilst the SU-76 started pounding the Pak38s.  While the T-70 got into assault, they died eventually to the Pak38s and the arrival of the German artillery. which shot them at point blank range with FP2+!

My attack forced his Pak40s to move and, along with the Pak38s, eventually they succumbed to my SU-76s, while my infantry stormed into the Grenadiers with a lucky assault, killing them off.

The arrival of German reserves took out my ‘heros’ but, while the artillery bombardment continued, my Commander advanced on his own and took the objective for a 7-2 win.

The board had a road down the centre and allowed a lovely spearhead move, meaning I was mobbing the objective on turn 1.  His 17pdrs dealt a lot of damage from ambush and I made the mistake of splitting my bombardments when I should have focused them on one point.  I also misjudged his infantry coming on from reserve, using a follow me to assault my SU-76s from the rear, forcing them to break off and even capturing two!  The NKVD will be having words with those crews!

This forced me to divert a lot of fire, and my infantry, to deal with the imminent threat with extreme prejudice.  However there was no shifting me off the objective and I won at the start of turn 6.  It was a 8-1 win, but only due to a lucky last stand roll, as his infantry killed off one of my two Zis3 guns.

I gulped as I was forced to defend in Bridgehead!
While I blocked off one avenue of advance you can see in the pictures that he had an awesome number of shots lined up at me and I had no cover beyond a field.
Amazingly he rolled poorly and I was very lucky to get five SU-76s onto the corner, allowing me to mass shots on his tanks.  Six turns of throwing shells at each other with little other action except a failed advance by the Armoured Rifles led to a very surprising 6-3 Win to me.  For me, this showed why defence battles between tank armies are not that great.  Thankfully battle stances normally avoid that.   Without stances, the event rule at least prevented an auto-win for Gary, as I would only have had five SU76s, a hero rifle platoon, and two guns on table!

Rex has  brilliantly formed his Tankovy with four KV-1s, which I cant really hurt, eight Valentines, ten T60s, eight Valentine lates with 4 6pdrs plus BA-10s, IL-2s and some mortars.  I was attacking and he had the both platoons of Valentines, Mortars and T60s (in ambush) on table.

My IL2s started to rocket the Valentines, doing a decent job of bailing them and scoring a couple of kills over the initial turns.
Elsewhere, AT9 vs FA6 at long range is a road to nothing much, although in time it did whittle down the first Valentine platoon forcing them back.

At the start of turn 2 I had my chance for a win.  I had moved my infantry into the minefields to clear them and, after some good shooting, realised I was within four inches of the objective, forcing Rex to move to contest it, but his valentines were too far away.  He popped his T60 ambush and MG’d my infantry down to a single stand.  Alas, while he held his nerve for the last stand roll, he was too far away to contest at the start of turn 3 (I hadn’t thought to move my inf further, instead fixating on the minefields).  I even blew away the T60s leaving the objective open. However, by this stage the KVs had arrived and sat on the objective.  The rest of the game was spent getting three points to minimise the pain.  3-6 loss but a brilliant game against a great opponent.

Richard Butler’s Armoured Grenadiers were backed up by a Ferdinand, lots of armoured cars, and of course Marders.  I attacked in Breakthrough on a board that was rather open.  It started badly for Richard with my Il2 bailing his Ferdinand (which then ran away on turn 3) and my arty killing his AT Rifle, leaving the infantry exposed to the marauding T70s.  Due to a fast advance to the center-ground hill, his Marder ambush was sub optimal.  While it took a platoon of SU76s, they died to return fire as most of my army was bought to bear on them.  With the AT gone, my T70s finished off some Armoured Mortars and then assaulted the Nebs to protect my infantry, which had come on from outflanking reserve.  Richard’s reserves trickled on and took another platoon, but again the fire power in return blasted them away.  At the start of turn 6 it was a 6-3 win to me.

This was a great event, so thanks to all my opponents, the Bun Shop Boys and of course Battlefield Hobbies for hosting.
I was chuffed to finish on 30 points and take home 1st place and a really well done trophy.

Now for a new army….