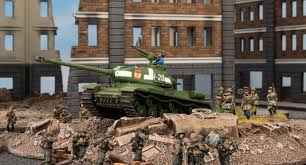 Welcome to the latest in a very sporadic series of articles I write looking at how to get the most out of a particular list, especially one which is viewed as sub optimal/non meta.  Today we look at the mighty Soviet IS2 Guards Heavy Tank Regiment.

First off let’s look at the IS2 itself.

With FA10 it’s a beast to penetrate, only beaten by the upgraded Churchill (Churchill VII) and Crocs, and packs an excellent side armour 8, which makes assaulting bazookas pretty reliable and pinned panzerfausts will only get two penetrations a quarter of the time.  Unlike the Churchill it is pretty zippy and can pull off an 18 inch assault (tactical move, follow me, assault) for a turn 1 ‘surprise!’.  Its morale is so so, only being confident, but it will stick around with 3+ last stand and fight on once engaged in close combat with its 3+ counter attack.

Unfortunately the good points really end with the gun.  On paper it looks great, with high AT and FP.  However it has a short range and, worse, is slow firing ROF1.  Therefore, when you move (which these guys will be), they struggle to hit a barn door!

One neat thing about the formation is that one platoon can field the IS-85 with its ROF2 AT12 main gun and therefore partially mitigate this issue and be well placed to deal with medium armour.

A platoon of Hero SMG is also core and very useful at 7pts.  They can hold a buildings and be sacrificed to clear a minefield (historic too!).

The issue with any heavy tank list is numbers and low numbers means a risk of a formation break.  Therefore I am going to aim for a list with five units, including the HQ.  To be honest, if the enemy can take out all that then they deserve to win.

With only a few units in the force it’s vital that they can be positioned to best effect and that enemy movement can be shut down, therefore a unit of three BA64 is the next purchase.  Note that you could make this a Fortress Europe army (albeit with a IS-2 formation) and take the BA10 which is the same pts but with a AT7 cannon, and rather useful against enemy recce.

Finally we need to be able to dig out pesky gun teams, especially Pakfront 88s which is massive in the meta.  For this I go with the Katyusha Guards Rocket Battery and a battery of 122mm guns.  The idea here is that the rockets are a great deployment denial weapon while careful placement of the 122mm guns can avoid danger close issues when you assault with the IS2s (rockets have a 6 inch danger close).  I know some people like double Katyusha to deny two objectives and that is a nice option as well.

Firstly I must stress that this isn’t a “uber take all” list.  Like everything, it has it’s achilles heals.  However, with 10 FA10 vehicles, recce, infantry and double artillery it ticks most boxes and will ensure a good game vs almost everything.  Here are a few thoughts on how to get the most out of them

Well, there you have it; a solid and optimized list ready to bring death and destruction to the Axis forces.  Let us know how you get on.