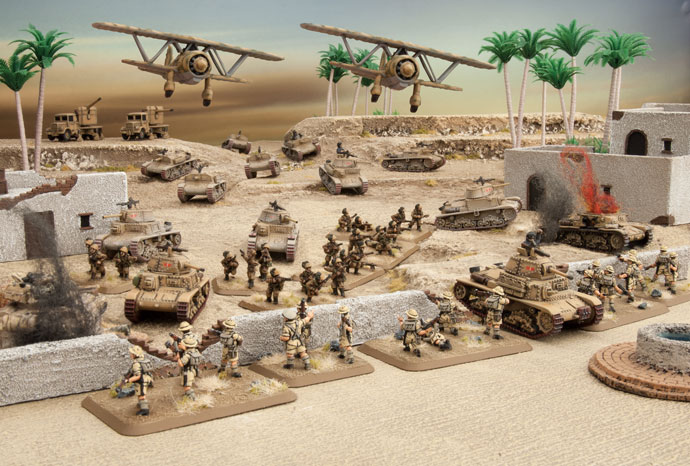 A belated Happy New Year to all our readers.  This is my first article of the year and with the arrival of twins on the 29th of Dec they may be a bit rarer for a while (I write this with one slung to my chest!).

With the imminent arrival of the Mid-War (MW) North Africa compilation book, I thought I would offer a slightly different take on my normal ‘better list’ article series.  I think the new starter sets are fantastic value and I already know a lot of people planning to pick them up, therefore I thought I would show what you can do with them along with a few extra purchases.

As a starting point I am going to assume that a new player has purchased:

While Tobruk gives you a lot of tanks, the main starter set expands those options and easily provides a range of options.  Both sets are immense value at a combined £140 RRP, however check out your favourite retailer and you will easily find it 10% cheaper (maybe as much as 20%).

These two purchases will bag you:

Lets start with what all that glorious plastic would get you in a single list.

With a mix of M14s and Semoventes you easily get to 118pts.  More than enough to form a typical 100pt game and easily scalable to 120pts with a command card for those wanting some big tank on tank Tobruk engagements.  If you wanted to use almost all the tanks you could switch the five M14s for six semoventes, bringing the force to 130pts, and only leave a single hull aside.

If we wanted to reduce this to a typical 100pt game then I would suggest.

Here I have taken away a pair of 88s and two Semoventes, but added the ‘Iron Men’ command card.  This gives the M14s the ability to pass a Follow Me on a 2+ and shoot after they do so.  This means that the unit gains great odds of conducting a 14″ move and allowing it a better opportunity to hit side armour (something you need to do with AT6!).

While simple, this is a quite a respectable force that will offer a challenge to almost everything the allies (or Red on Red) have to offer.  While Italian tanks lack front armour (FA3 for M14s and FA4 for Semoventes) they are cautious which, when used correctly and combined with cover, is going to stop 2/3 to 5/6 of shots hitting to begin with.  Cautious is the best armour in the game.  In a choice between FA5 and aggressive or FA3/4 and cautious, I would take cautious every time.

The M14 is interesting.  While lacking AT it is perfectly capable of engaging guns and lighter vehicles.  The current meta for MW is a lot of light tanks and armoured cars and these guys eat them for lunch.  Just like their Semovente cousins they have incredible stats with a 2+ (yes you read that right) remount.  Given the lower firepower in MW compared to Late War, against most tank shots you are almost ignoring 50% of penetrating hits.  I have used Italians loads and always chuckle when I get bailed.  Add the formation commander to the mix and you will remount 35/26 times.  Amazing!  They are also a great assault tank with a respectable 4+ skill but increasing to 3+ 33% of the time thanks to the ‘Million Bayonet’ rule.  With a great follow me rating they can also get some rapid assaults off with some cheeky 10″ tactical move + 4″ follow me + 4″ assault shenanigans making a 18″ assault on a 3+ (or 2+ if you roll well).  6 MG shots finish of this little beauty meaning the platoon can statistically kill 5 stands of cautious infantry per turn should they foolishly advance in the open.

The Semovente is equally capable.  It trades assault capability for a more capable AT8 FP3+ gun, putting it slightly ahead of the short Panzer III.  The HEAT rule makes it even better and it can happily engage targets from long range.  This also helps it by increasing it’s FA to 5 making it much more resilient.  FA5 combined with concealment, and +1 to hit for long range means five of these won’t be going anywhere fast.  Even if you do get hit they also remount on a 2+.  The icing on this assault gun cake is that it can bombard and, with five tanks in each platoon, it can re-roll misses.  This quickly begins to hurt when you are already ranged in.

The 88mm is perhaps the best priced gun in the game (MW and LW).  An incredible AT14 FP3+ laughs at anything short of a KV or Tiger (even then it chuckles).  It’s range of 40″ means it can cover vast areas, mitigating it’s stationary nature, and it is fearless so can reliably unpin.  24pts is a lot but compare it to any other unit with AT12 + and you can quickly see why it is such a good choice.

The 47mm gun is also quite surprising.  The key thing is that the unit is actually infantry.  This means it has to be reduced to two stands before it triggers last stand, it can move as infantry and even blitz and follow me.  This means this innocuous AT6 unit can suddenly burst from it’s foxholes and move to 8″ to flank something, fire 4 shots at AT6.  Many a player has been caught in that trap before.  Beside that they are a good unit to hold an objective, perhaps screening the 88s and artillery.

Finally the 100mm artillery.  A surprisingly cheap artillery unit with smoke AT3 and FP3+.  Fearless makes them excellent value.  You tend not to see them often because the captured 25pdr command card is an even better option.  However, we will ignore that in the spirit of the starter sets (at the very least you can re-use the crew with some 25pdr… – Lee).

The list above is honestly a solid and capable list, I would happy bring it to a game and even a tournament, it will hold its own against all but the most competitive cheese.

It has armoured mass combined with the survivability of cautious and a 2+ remount.  Eight AT14 shots can deal with anything FA6 and above (not that much in MW).  It can produce three bombardments with two of them re-rolling misses and has an answer to light vehicles/ACs with the 47mm guns.  If someone wants to take out the 88s via bombardment you are more than capable of counter bombarding allowing you to keep them firing against medium-heavy armour.

All this said a list can always be tweaked and while respecting the bulk of the starter sets I would personally go for the following.

I call this list ‘Hell on Wheels’.  Keeping the same core, along with the four 88s, you are using a big bulk of the starter sets.  I have removed the 100m guns and 47mm guns replacing them with three Lancia and four L6/40 scout tanks.  My logic here is deployment and high-end AT.  AT is always the biggest issue for Italians.  You don’t have a nice mid tier AT9-10 gun like other nations do (unless we turn to allies or the dark matter that is the P40).  You are pretty much stuck with AT6, 8 or 14.  Therefore, I like to load up on big guns.  If you hit something it dies, no faffing around.  That then leaves your now 21 tanks to deal with any light vehicles and infantry.

The Lancia is basically an 88 on a massive mobile truck.  It lacks a tactical move but can dash, this mitigates the enemy hiding and allows it to come on from reserve.  You need to protect it from artillery (it isn’t dug in) however the gun shield combined with a 4+ save makes it surprising resilient from the front.  It can also blitz so don’t forget that it can move and fire!

The L6/40 has scout and spearhead and it is perfect to get your units into better position.  This is a force multiplier to the Lancia and 88s allowing them better firing positions in many missions.  It can also get you in range of some turn 1 charges with the 18″ charge manoeuvre discussed above. Finally they are still okay tanks, with a 4+ remount and a gun capable of engaging lighter targets.  Amazingly they are cheaper than a lot of infantry stands.

The two starter sets combine to make a fantastic starter for an Italian player.  Just using the contents of the box you can field a really capable force that will hold its own on pretty much any table top. With a few further purchases you could further enhance the force with recce and extra AT14 AT.  As I finish writing this a final thought occurs to me.  With the Tobruk set you also gain a British force.  If you swap this with any other player who has purchased the Tobruk set you will have:

That actually makes up the majority of my tweaked list.  Therefore you could do this and just purchase two boxes of Lancias and some L6/40s saving you the starter set box.

In summary if you are starting on your own get the Tobruk and Avanti starter sets.  If you have a friend starting who wants to play the British then each get Tobruk and split it.  Then you can just buy a few more choice units.