Dr Cox here with a review of the Axis Market Garden Book, is going to be different to the
Allied one, mainly as I haven’t played the axis forces in the book, or really
any axis forces, so any comments will be appreciated!


Again I like the layout of the book, and unlike the allied book, I think it
really has a lot of new lists, and for that reason alone I’m happy I bought
this!
Fallschirmjagerkompanie
(vet and trained)
Well I do have a fair amount of experience killing these
guys thanks to Winner playing them. Firstly with VDH they get to ignore the
allies rule which is brilliant, and those Panzefaust traps are an annoyance as
always!
I like the fact these lists can access all manner of
interesting support including some older panzer models, and the inclusion of
rifle recce, should also help them out a little bit. All in all though I think
FJ will continue to bring the best that Fearless Vets (and at times fearless
trained) have to offer, but still so pricy once you add fausts!

Now this is a list I’m working towards currently, mainly
thanks to my lovely Christmas present from ben of some jagpanthers. I’m loving
the fact it’s a vet list, so you should be hard to hit with that damn AT15 now,
whilst the stugs, can ignore AT15 as they’re toast anyway! You get some nice
AA, supporting troops from various places – I’m especially liking the security
section for a cheap 6th platoon! But I don’t know how well the
artillery will mesh with the list.
Grenadier Kompanie
Again comes in two flavours CV and CT, and of course the
ability to take lots of short range infantry anti-tank. I personally think this
is not a bad list, you can max out on infanty, pioneers, schreks and MG’s with
some decent tanks and anti tank to back them up. It may not be award winning
but I could see it sitting solidly.
Pioneer Lehr
Finally making an appearance! I love the history of these
gentlemen, m one concern is in fair fights, the extra points for any minefields
and wire may be squandered, and I see assaulting other infantry teams hard due
to little HMG goodness.
Panzerkompanie
Another list which I like the look of, as it’ll suit my
complete lack of subtlety! It is very obviously the more confident brother of
those lists in BGG, and now gets the little bit of artillery, though lacks
recon still. I can really see myself playing this with about 8 panthers my
triples and some Assault rifle Grenadiers on the charge!
Euling
Now this is another very interesting list, coupled with the Euling’s ability to start his units in
prepared positions, this is a real defenders list. If you come across this list
without pioneers I think you’ll struggle, having fortified MG with fausts is
needed and minefields and HMG nests is nasty and reminds me of my first game at
Brighton Bash!
Harzer
So you like HMG’s? well roll up roll up! It may be RT, but
with the Sichereits companies, and the 12 HMG’s a platoon, you should still
stop any infantry in it’s tracks, or at least until you end you game due to the
need to leave. You’ve also got enough AT from the Flak88’s and Schwere panzers
to stop yourself being over run by tanks. Don’t know if this is competitive but
would be fun to try out!
Von Swoboda
What can I say, love at first sight! Who doesn’t want to
field 16 Flak36’s? Again I have no idea if it’d work, but at least it has the
always defend rule, just need to make sure you have enough other units so in a
half on half off mission you get all these bad boys on the field.
Brinkman
Now a list I like, lots and lots of FV halftracks racing to
the objective, a little bit of armour, but this really appeals to me, it’s
proper mobile warefare, and has the right mix of support available to make it
interesting to me too, but it would be PSC half tracks I think to keep it
cheap!
Graebner
Ok I was wrong, this is the always attack, mobile list I’ve
wanted! With spearhead moves, and recon deployment first, you should be on top
of the enemy from turn one if you do it right. Against armour though I can
really see this list struggling, and to me I think that’ll limit it’s all
rounder abilities, but it’s a must for any campaign I think.
Knaust
First off wooden legs rule! Again for historical reasons we
have an infantry list pretending to be mech, and whilst it may get 4 armour
slots, the Panzer4’s and 3’s don’t strike me as too threatening
Hummel
Now again a list with some great history surrounding it, and
a interesting force to field as well. I think for spamming the tiger it’s
great, but will require careful use, as there is very little to help it you go
off piste. But hey CT tigers with no skills will be appealing to some.
Arnheim
Now in many ways I wish we had more of these sorts of list,
a ahistorical but plausible list. I wish that in Market garden they had a list
where XXX Corps had reached the para’s as I think them facing off against this
list would be very interesting for all those ‘what if’s’. Again a decent
selection of units with wide choice in the compulsory sections, and FV to boot!
Spindler
Now this is a nice infantry FV list, able to take on most
things I think. Plenty of options in the compulsory section and access to
MG/faust can provide a strong core, whilst you get a couple of armour slots,
and a broad mix of other support options. I could really see myself using this
as a german infantry list at a tournament, with the rerolls to reserve ensuring
you don’t have to wait till turn 3!
Stug Batterie 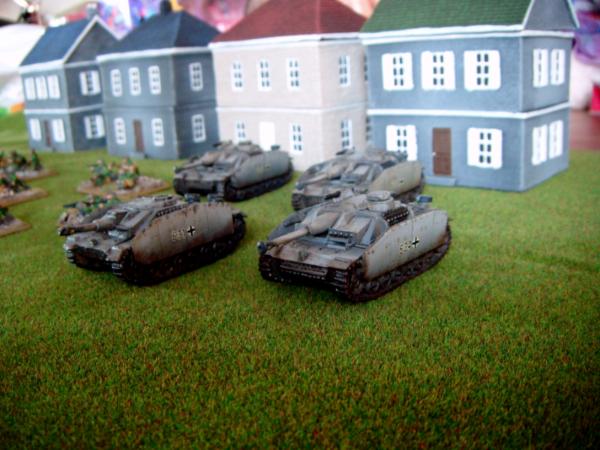 Now I know there is a lovely one in Grey wolf, but I don’t
think it got a whole platoon of those lovely StuH’s.
Schwere
Panzerkompanie
It certainly has teeth this list, even if there are only a
few teeth there! KT’s are just so many points, and yes they are fearsome, but
worth it in this new age of AT15 everywhere? Maybe you need to meta the meta, I
know they all take AT15 so I’ll go for PZ4’s but they know I’ll do that so I’ll
go for KT’s…
Tetau
Whats more to want from a German list than more men than an average Soviet list! Add to the mix flame tanks converted from French Tanks and you have a very fun and interesting list.
Conclusion
Well there it is my brief run down of BbB, I feel it
actually covers a lot of bases, with Tank, mech and infantry lists in all
shapes and sizes with some interesting unusual lists for those campaigns. I
think I’ll probably stick with more generic lists, but I honestly think this
book has something for everyone.
Thanks for reading
Dr Cox