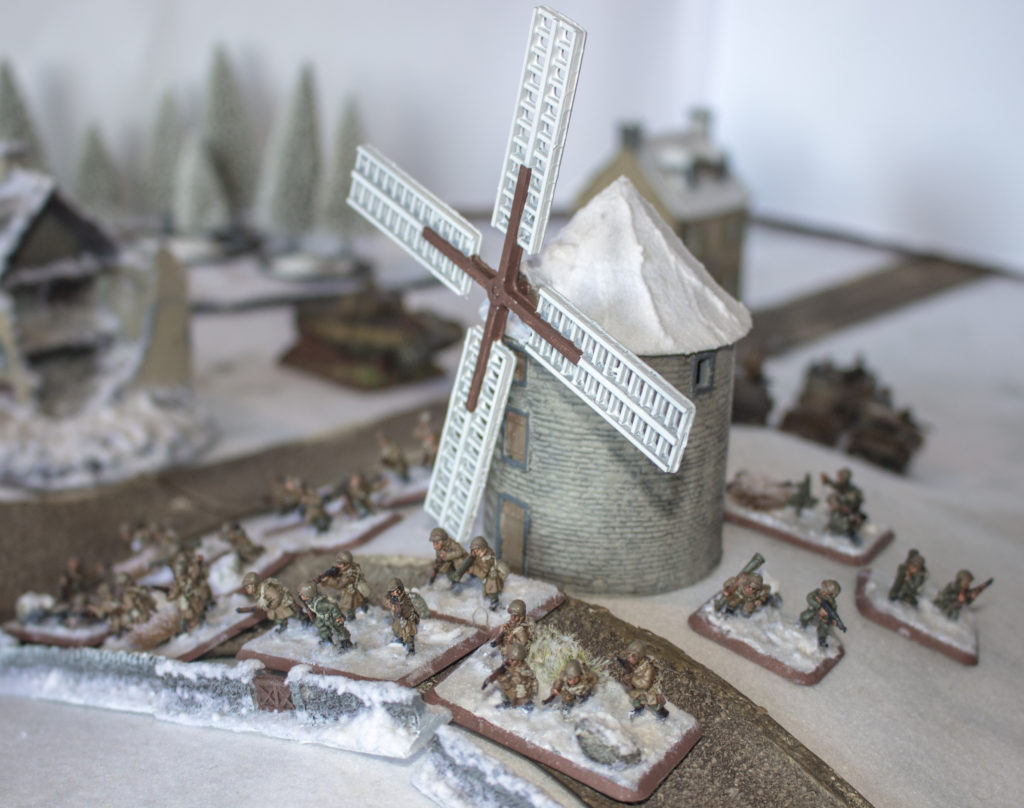 Over my last few blog posts I have been highlighting my new winter table ready for the Battle of the Bulge.
Always impatient, I decided to get a game in with my new winterised Yanks.  With my Winterised Germans still on the painting table I decided to do my own ‘Devils Charge’ using the SS Panther Company.

Now of course I cannot give the game away as to what is in the Bulge Books but I still wanted to use my new models.  Therefore some substitutions were in order.  The US forces are a DDay Armoured Rifle Company but I used the M10 rules to field my M18s as support.  The Germans are a SS Panther Company and I used the Tiger rules to reflect my two King Tigers.

In order to reflect the initial drive into Belgium, the scenario Breakthrough was chosen.  Will the SS Panthers smash though the US lines or will the Armoured Rifles close and hold the line?

Sgt Johnson peered out of his foxhole on top of the hill overlooking the crossroads.  The ground was covered in a blanket of fresh snow.  Life had been dull on the line, with the battles of Market Garden and the Normandy Campaign completed, winter had taken hold.  He fully expected a few months downtime until the spring when the final offensive into Germany begun.  That’s if anything was left after the RAF and USAAF bombings raids.

His platoon has been tasked with providing overwatch of the crossroads whilst Lt Dillon’s platoon was to the North, near the old farmstead. On-call, he had 105mm guns and the company’s mortars.  The company’s anti-tank platoon also hadn’t been idle; they had spent the time digging in and camouflaging their 57mm guns to ensure these would be a surprise to anything coming at them.

As the sun rose for another day, Johnson picked up movement.  He could barely believe his eyes “Panthers he shouted, stand to’.  A flurry of activity erupted, in front of them were a variety of heavy armour coming up towards the hill.  Despite being in the range they didn’t seem interested in engaging them, instead of rushing forward at a surprising speed.  Suddenly artillery started to fall on the platoon; despite their defences a direct hit took out a fire team’s foxhole.

Breaking off from the main thrust, a platoon of three Panthers were approaching the farmstead, using it as cover as they dashed towards the road.  Sgt Johnson got on the company net and radioed 2nd Platoon.  Quickly a snap ambush was prepared to welcome them.  Lt Dillion’s platoon blitzed out of their half-tracks and stormed through the Farmstead, spilling out into the courtyard.  Clambering up boxes they levelled their bazookas at the sides of the Panthers bailing two out.  Heroically, Lt Dillion led an assault against the surviving panzer, driving it off and killing the former occupants of the other two tanks as they attempted to flee their bailed vehicles.  The victorious 2nd Platoon quickly took cover back on the farm.

The 57mm guns on the hill loaded and prepared to fire.  They know they can’t punch through the tough armour of the Panthers and King Tigers, however the guns presence may stop their assault.

As artillery continued to rain down on Sgt Johnson’s platoon he lost more men and was forced to take cover.  The 57mm guns while protected in their emplacements, also had to seek cover due to the sustained bombardment.

With a clank of gears the King Tigers crushed the small wall at the bottom of the hill and swung left, machine guns blazing as they assaulted into the platoon.  His platoon fired several bazookas but most went wide as they struggle to aim with the artillery around them.  Equally, the 57mm guns fired but their shells ricocheted off the Tiger’s tough hides.  The combat was bloody and went back and forth.  Several bazooka teams were mown down as they attempted to take snapshots, although one did manage to bail out one of the beasts.  Eventually, under mounting casualties, the platoon was forced to fall back, and abandon the guns.

Sgt Dillion struggled to rally his men; they had not been expecting this fight and chaos reined, he couldn’t even get them to start digging new shell scrapes.  Lt Dillion’s platoon quickly dashed towards the crossroads, taking heavy casualties in the open from the German artillery.  Maj Brooks seeing the arrival of his Shermans and the danger the Panthers presented called down a smoke bombardment from his mortars along the road at the bottom of the hill.  Frustratingly the Priests still failed to damage the Panthers.

Using their stabilized guns the 76mm Shermans engaged the Tigers at close range.  Alas, the armour was too thick and none inflicted damage.

With the hilltop cleared the Germans pressed their advantage.  The bailed Tiger remounted and both turned and crested the hill firing into Sgt Johnson’s platoon with their MGs.  Once again they were forced back with the Tigers consolidating onto their objective.  The four Panthers drove into the smoke and engaged the Shermans claiming one.  The tank dual had begun.

Amongst all this chaos the sneaky German recce cars advanced up the hill confident that the Sherman’s had bigger fish to fry,

Further reinforcements arrive in the form of fast-moving M18s.  Unable to flank the Tigers they engaged the king Tiger’s front armour but the 76mm rounds, unsurprisingly, bounced off.  The Shermans also engaged the Panthers but again are foiled by the big cats’ strong front amour, with two bailed but no kills.  Sgt Johnson’s platoon was still in disarray and refused to rally.  Maj Brooks moved up to take charge as Lt Dillon continued to advance, despite mounting casualties to the artillery.

As the smoke cleared, the Panthers and Tigers engaged the US roops, claiming another two Shermans.  The scout cars also started to engage the armoured mortars whilst the German mobile AA arrived from their outflanking manoeuvre, pumping rounds into the Hellcats and causing one to brew up.

Sgt Johnson finally got control of his platoon.  Seeing the Panthers annihilating the US armour (which had now fled), he acted decisively taking a squad and the remaining bazookas to flank and kill them.  Several bazookas found their mark brewing some of the panzers up.  He rushed the lead tank, braving its return fire.  Another bazooka round slammed into the Panther and, like that, all the Panthers were dead or bailed.  Several crew clambered out and managed to run into the tree line, harried by rifle fire.  The flank was secured.

Meanwhile, the three remaining Hellcats flanked behind a house and engaged the Tiger’s side armour.  This time the shells penetrated and one exploded.

With the Germans reduced to a Tiger, the Scouts and a platoon of AA, the whole operation was on a knife-edge.  The German AA opened up on the M18s rear armour, ripping them open and causing the survivor to flee.  The remaining Tiger, supported by MG and cannon fire from the scouts, mowed down the remaining bazookas before assaulting.  Nothing could stop this beast and the US forces again fell back, conceding the crossroad.

Bloody and weary, and with barely any anti-tank options left, Maj Brooks issued orders to retreat back to the Farmstead.  He knew that he has slowed the German advance, but the way was open for the German thrust deeper into Belgium.

This was a bloody battle all around.  The loss of the Panther platoon so early was a real blow, it was going to block Lt Dillon’s platoon from supporting the objective.  The theme of the whole game was “beware ARPs”, they can really knock outside armour and then finish off survivors in the assault.

The two (King) Tigers were the stars.  They survived almost everything and are absolute assault beasts.  With a 2+ counter-attack, they just keep going.

It was great to show off the new board and winter troops.  The next project is my winter Volksgrenadiers.  They will be used with the D-Day Beach Defence Company rules until the Bulge book is released.