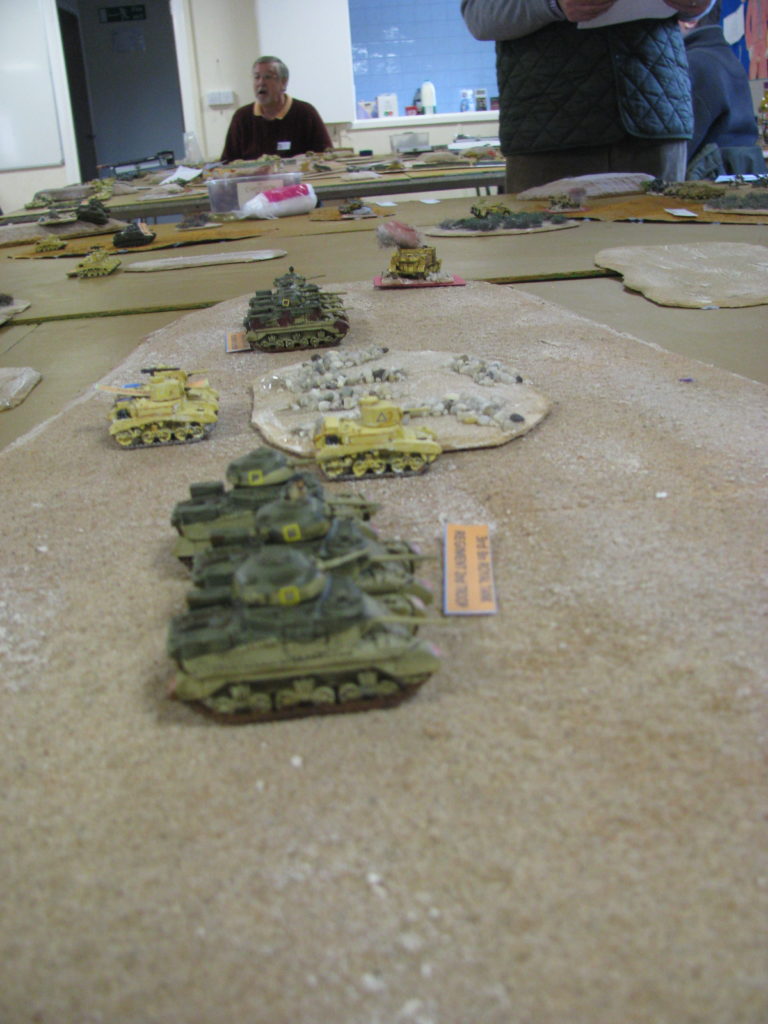 Over the weekend of November 30th / December 1st 2019 I was invited to take part in a weekend game covering the battle of Gazala which took place in June 1942.

The event was organised by the “Big Battle Group”, who for the last 40 years have been staging refights of various battles from history at the Kirkby-in Ashfield Scout HQ. Whilst there were some familiar faces from the old Flames of War competition scene, and ETC, there were also a large number of players who had not played Flames of War before or who dabbled in it infrequently.

The game itself was a labour of love by organisers Richard Butler and Mike Somerville. They had spent two years designing and creating the five tables on which we would play, using aerial photos and topographical maps to create tables that represented the battlefields as much as possible.  They also created orders of battle for the games, and using Richards contacts, acquiring a substantial number of 3D printed vehicles for use in the game (thanks also go to Graham Wilmott, Mike and Graham Klaka and Jay Mercer for providing additional vehicles, I made my own small contribution which I’ll come too shortly)

So the game as designed was split over two days and 5 tables on each day.

Day 1, Saturday – the early stages of the Battle

The 3d South African box in the north from the Coast. Defended by the 1st SA brigade and attacked by 102 Tranto Division over 300 elements on table;  that is Infantry, artillery and vehicles. – in the end this table wasn’t used as we had a couple of drop outs

This was the centre of the Allied defensive boxes important to Rommel as it covered two of his vital supply lines. 150 British Brigade defending and Pavia Infantry Division and Trieste Motorised Division Attacking. Theer were over 450 elements on the table

Made famous by the defence of the Free French and attacked by the equally famous Ariete supported by KampfGroup Hecker. There were over 300 elements on the table.

Now the more mobile actions as Rommel lunches his right hook first at Retma box defended by the British 7 Motor Brigade and attacked by 90th Leicte Division. There were over 250 elements on table.

The first tank battle at Dahar Harmet 15 Panzer attacking 4 Armoured Brigade. – this is the table I played on and over 300 elements were involved.

21 Panzer attacking 22 Armoured Brigade.  There were over 300 elements on table.

Day 2, Sunday – The later stages of the Battle

Defended by part of 21Panzer and attacked by British 32nd Army Tank Brigade, Over 150 elements on table.

Table 2 – The battle continues at Got el Scarab

The struggling Italians are joined by element of both 15Panzer and 90Lt. Can the Axis finally break 150 Box?

The French have had enough putting up a valiant fight at Bir Hakhein but now its time for the Breakout in a night action supported by elements of 7 British Motor Brigade. The axis have been joined by 101 Trieste Motorised Brigade, while elements of Ariete have moved on.

The game was played using v4 rules but with one or two tweaks:

In addition to game winning objectives, each table had interim objectives control of which would accelerate or prevent reserves appearing, and as the battle was over two days, batteries had 3 (2 on Sunday) rounds of smoke.

When I was invited to play, I asked if I could take charge of 3rd Royal Tank Regiment, the unit in which my great uncle had fought at Gazala. Mike had very graciously allowed me to take the role of Brigadier Alexander Gatehouse commanding 4th Armoured Brigade and so, the night before the game, saw me putting the finishing touches to my Grants and Stuarts of 3rd Royal Tank Regiment, which I’ve been painting for about the last 10 years as a tribute to my great uncle, who was sadly to lose his life near Mareth in 1943. 3rd RTR had a non standard camouflage scheme applied at the time, and thanks are due to Mike Starmer (the guru of British tank paint schemes and markings) for his help in researching this.

The day of battle began with four players facing each other over the Dahar Harmat battlefield. Our opponents, the 15th Panzer Division, were led by England ETC player Paul Stovell.  The battlefield, as can be seen, was dominated by two large depressions in which both sides had deployed artillery and transport, and the large (insert name) ridge on the British right. There were no reinforcements coming for the British but there was a constant drip feed of German reserves, which was accelerated if they were able to capture the objectives; two of which were on the large ridge.

The game was very cagey, unlike the original action where the British just got stuck in and suffered quite extensive losses.
Paul initially moved his panzer force to the British left and cleared us off some of the interim objectives; here we had the 8th Hussars, supported by some armoured cars.
In what was to be an ongoing issue for us on Saturday, we struggled to hit our German opponent with tank fire and when we did we couldn’t kill him. I moved 3rd RTR across to the left to support the Hussars and this had the desired effect of slowing Paul up, and we exchanged smoke barrages as we tried to get into an optimum position. Our artillery bombarded each other, although the depression kept much of our support out of each others sight. The British were able to kill off a battery of artillery, some towed anti-tank and a pair of dreaded 88s, for the loss of a couple of 25pdrs. In this we were assisted by a pair of Hurricanes allocated to us by the British c-in-c. However, a later Blenheim sortie achieved nothing despite the plethora of targets (it failed to even range in !!)

As more and more Panzer IIIs rolled on to the board, Paul switched his axis of attack back to the long ridge.  His panzers dashed and used movement orders to quickly re-position. I moved 3rd RTR back across and despite having cover and higher rate of fire ( I was stationary, Paul was moving) I couldn’t put a dent in the panzer attack and in short order I was pushed of the ridge and fell back to defend the game winning objective on my right, hastily bringing what was left of 8th Hussars and 5th RTR across to cover.

Initially the organisers had wanted to carry over losses onto the second day but in the end had decided to run the Sunday games with losses already applied rather than use Saturdays game play as arbiter of this.
As a result, rather than sit off and snipe me down at long range from the ridge, Paul decided to launch an assault on to the game winning objective; held somewhat tenuously by the remains of 3rd RTR and a motor platoon with some artillery losses. He hoped to be able to finish us off before the Hussars and 5th Tanks could get across.
Using smoke to cover, he closed in. However, we had two attached batteries of anti tank guns (6pdr portees) which could be deployed mounted in ambush, I was able to pop these in the cover of an old arab graveyard (handy bullet proof cover), and these were enough to hold off the attack with lots of burning panzers.

So the game ended as a winning draw for the British, German losses were higher than in the battle due to Pauls last ditch attempt at taking the objective.
4th Armoured had done considerably better at conserving it’s tanks on the day than it managed at the real battle, largely due to me being a lot more circumspect than my counterpart in the real battle.

On the other tables The Italians had managed to break into the Bir Hacheim box but were not able to convert their initial penetration into victory.

On the 150th Brigade Box table, a long drawn out game of attrition was played out with neither side able to gain an advantage, though the British did use up a substantial part of their force.

On the Retima table, 7th Motor Brigade was able to halt the German advance.

Only on the Gott el Zohra table were the Germans able to establish a winning position with 22nd Armoured Brigades Crusaders and Grants coming off decidedly second best.

Overall, Saturday saw a slight advantage to the British.

I stayed in the character of Brigadier Gatehouse for the Sunday game in which six players would battle out the actions around the Knightsbridge box.

This time my dice were substantially better!

In the 4th Armoured Brigade sector, I was able to blunt the German advance and, although eventually driven from the ridge as units of the Ariete started to come up in support,  the weakened panzer units that were able to advance over were mopped up  by the anti tank guns of the motor battalion and divisional support along with the remaining tanks.
The Ariete fell foul of a sweeping left hook manoeuvre from 2nd which was freed up by the loss of the German panzers advancing on the Knightsbridge Box.

All along the front the British artillery was able to target and destroy the German 88s and so the German Panzer IIIs had to advance into the face of concealed British tanks and guns in the open once their smoke had run out. The Germans never seriously looked like getting close to any of their objectives and, as they melted away, the British were able to counterattack and win the day.

I do feel that the ability in the game of the Grant to take advantage of linear cover, or hull down positions and still use it’s 75mm gun from concealment gives it a big advantage, it certainly meant that the Germans never really looked liked succeeding, historically of course the high silhouette of the Grant was a major tactical disadvantage and negated to an extent the advantage of the 75mm gun.

On the other tables the French were able to break out of Bir Hachiem and make good their escape.

The attritional battle at the 150th Brigade Box continued for a second day with the British able to hold off the attacking Italians.

On the Cauldron table, Team England ETC players Graham Wilmott and James Hamilton were able to defeat the attack of the Germans led by their teammate, but opponent for the day Paul Stovell (though it was a close run thing).

Only on the “northern flank” at Haglag Sidra were the Germans able to replicate their historic performance; the Valentines and Matildas of the 32nd Army Tank Brigade in true British tanker style immolating themselves on a German gun line, including a number of 88s, just short of the objective (perhaps the most historically played scenario by a British player).

Overall it was a really brilliant weekend. Having been somewhat unmotivated of late to play Flames of War, it was nice of the group to invite me and I had a really great weekend moving tanks around the tables and catching up with old friends. All that was left was to pack up…..and what a lot of stuff there was to pack up

Many many thanks again to Richard and Mike for organising, to Graham W for the invite to play, and to everyone else who took part.  Big apologies for not remembering everybody’s names