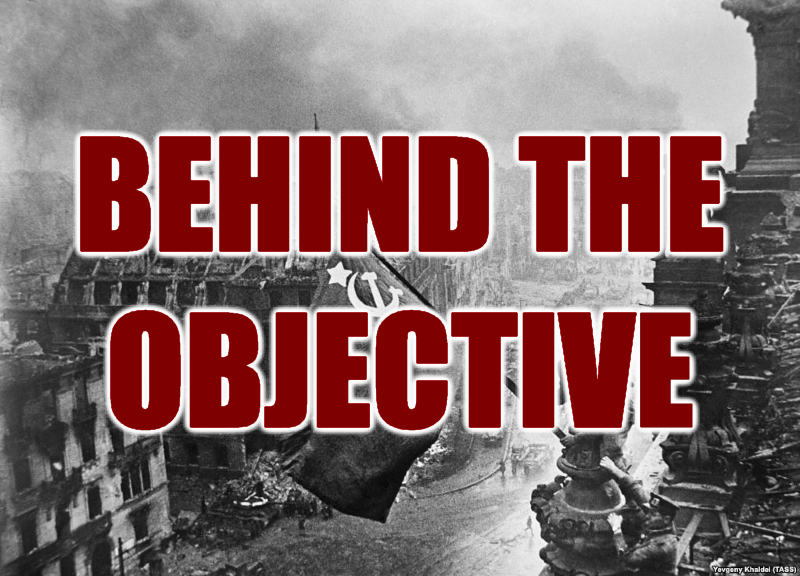 Behind the Objective: We’ll Keep The Red Flag Flying High

Richard takes a look at the photos that inspired the objectives.  Today he looks at the Red Flag over the Reichstag.

If asked I think many of us would be able to list a number of World War 2 images which we consider iconic, these will depend on your nationality, and perhaps your age the internet gives much greater access to images than books did when geriatrics like me were growing up.

If I was asked to name five I’d probably have to plump for:

The Raising of the Stars and Stripes On Mount Suribachi

But perhaps for me, the most iconic is the famous shot of Red Army soldiers raising the Red Flag over the Reichstag, for me, it symbolises the defeat of Nazi Germany and the indescribable horrors that it stood for. A cut-down version is my avatar on Twitter, it made an impact on me when I first saw it and that impact sticks with me to this day. It is of course so famous that Battlefront decided to make an objective marker out of it.

Battlefront did release some information about the events leading to the photo when they released the objective marker, and of course, the old v3 Berlin book had special rules covering Soviet flags. But I thought it time for a more detailed look “behind the objective” so to speak

The photographer behind the iconic image was Yevgeni Khaldei,
Yevgeny Khaldei was born on March 23, 1917, in Donetsk in today’s Ukraine. He was only a year old when a wave of Jewish pogroms organized by Ukrainian nationalists swept across the country. Khaldei’s mother tried to protect her son with her own body, but a bullet got through and lodged in the baby’s chest. The boy survived. It was the first time he had witnessed real tragedy with his own eyes. Alas, it was by no means the last. During the war, his father and three of his four sisters were murdered by the Germans.

Khaldei’s interest in photography developed when he was still a child: he would often pop into the local photo studio and help rinse negatives. He made his first camera himself using two cardboard boxes and a lens made from his grandmother’s spectacles. In the 1930s famine raged in the region and 14-year-old Yevgeny had to go to work as a metalworker at a train depot, where he received his vocational “education” on the shop floor. Essentially, it was the only formal education he ever received. As for the art of photography, he was self-taught. During breaks at work, he took photographs of his depot and he was soon invited to work on the newspaper, Stalinist Worker. At the same time, Khaldei used to send his photographs to the Moscow newspapers and some of them were published.

In the summer of 1937, at the age of 19, he moved to Moscow and began to work for TASS, the main Soviet news agency. Initially, his job was as a photo reporter dealing with the subject of workers of collective farms and factories across the country. But on June 22, 1941, the war started, and everything changed.

Khaldei was the only Soviet photographer who captured the whole war, from its first day to its last. He was commissioned as a Naval Officer and served all along the front line.

Know for documenting everyday life juxtaposed against images of war: he photographed a sunbathing couple next to a destroyed building, a traffic director next to a sign with German towns written in Russian, etc. Perhaps the first time his work came to prominence was the when his photo of a shell shocked reindeer was published. Khaldei was an early advocate of photo manipulation to highlight what he saw as realism. The Reindeer photo is a montage. The original photo of the reindeer, subsequently called Yasha, joining soldiers during bombing being merged with a photo of Hurricanes sortieing to intercept the incoming bombers.

Assigned to cover the fall of Berlin, Khaldei had a huge Red Flag made in case he found a way of making use of it as the Enemy Capital fell to the Red Army.

The actual moment that the Red Flag was raised over the Reichstag was not captured on camera, in part because the event happened at night. The Reichstag was seen as symbolic of, and at the heart of, Nazi Germany. It was arguably the most symbolic target in Berlin. The events surrounding the flag-raising are murky due to the confusion of the fight at the building. On 30 April there was great pressure from Stalin to take the building, in time for the International Workers Day, 1 May.

Initially, two planes dropped several large red banners on the roof that appeared to have caught on the bombed-out dome. Additionally, a number of reports had reached headquarters that two parties, M. M. Bondar from the 380th Rifle Regiment and Captain V. N. Makov of the 756th might have been able to hoist a flag during the day of 30 April. These reports were received by Zhukov, who issued an announcement stating that his troops had captured the Reichstag and hoisted a flag.

However, when correspondents arrived, they found no Soviets in the building, but rather they were pinned down outside by German fire. After fierce fighting both outside and inside the building, a flag was raised at 22:40 on 30 April 1945, when 23-year-old Rakhimzhan Qoshqarbaev climbed the building and inserted a flag into the crown of the mounted female statue of “Germania”, symbolizing Germany, he was assisted by Grigory Bulatov, Aleksey Bobrov, and Mikhail Minin. As this happened at night, it was too dark to take a photograph. The next day the flag was shot down by the Germans. The Red Army finally gained control of the entire building on 2 May.

On May 2nd Khaldei scaled the roof of the Reichstag with his homemade flag,  he simply asked the soldiers who happened to be passing by to help with the staging of the photoshoot; there were only four of them, including Khaldei, on the roof: the one who is shown attaching the flag was 18-year-old Private Kovalev from Kiev, the two others were Abdulkhakim Ismailov from Dagestan and Leonid Gorychev (also mentioned as Aleksei Goryachev) from Minsk. The photograph was taken with a Leica III rangefinder camera with a 35mm f3.5 lens. None of the soldiers who raised the banner on the night of 30th April is in the photo.

Famously the photo was famously altered in post-production. After taking the symbolic photo, Khaldei quickly returned to Moscow. He further edited the image at the request of the editor-in-chief of the Ogonyok, who noticed that Senior Sergeant Ismailov, who is supporting the flag-bearer, was wearing two watches, which could imply he had looted one of them, an action punishable by execution. Using a needle, Khaldei removed the watch from the right wrist. Later, it was claimed that the extra watch was actually an Adrianov compass and that Khaldei, in order to avoid controversy, doctored the photo to remove the watch from Ismailov’s right wrist. He also added smoke in the background, copying it from another picture to make the scene more dramatic.

Khaldei was notoriously unrepentant about the photo being altered in later years. Whenever asked about it, he responded: “It is a good photograph and historically significant. Next question please”.

Khaldei was amongst the Soviet photographers at Nuremberg:

As a Jew Khaldei fell foul of the Stalinist repression of Jews in post-war Russia. He was removed from his post at TASS in 1947 and had to work as a freelance photographer for Soviet regional newspapers until after the denunciation of Stalin when in 1959 he got a staff job at Pravda. He continued to work until he retired in 1976, he passed away in October 1997. His work is still widely available around the world via Sovfoto

German magazine Der Spiegel wrote: “Khaldei saw himself as a propagandist for a just cause, the war against Hitler and the German invaders of his homeland. In the years before his death in October 1997, he liked to say: ‘I forgive the Germans, but I cannot forget’. His father and three of his four sisters were murdered by the Germans”.