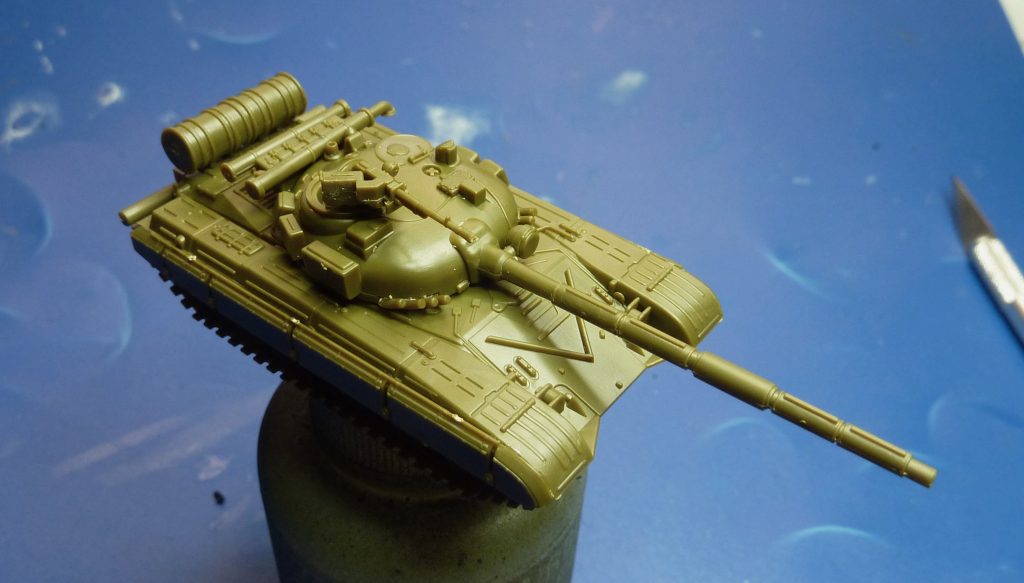 The Team Yankee novel focused on the US forces squaring up with the Czech based Soviet forces so the first Team Yankee Soviet MBT kit was the T-72 that featured in these forces.

But the real star of the Soviet forces in East Germany was the T-72’s slightly older brother, the T-64.  Red Thunder finally brings it to the table and it appeared this weekend in the Yuri’s Wolves boxset. Let’s take a look at it.

The T-64 was roughly contemporary with the Chieftain as a product of the swinging sixties, and still serves in Russian, Ukraine and a few other former soviet states.  Along with the Chieftain it represented a continued move to a Universal Tank – combining the mobility of a 1st generation Main Battle Tank, with the lethality and armour of a heavy tank. The 115mm  smoothbore gun from the T-62 was initially taken on before being replaced by a larger, longer, 125mm from the T-64A version onward (and the gun, or variants thereof, would be used on every Russian tank since).  The larger ammunition drove a need to find a way of stowing it at useful numbers without growing the tank and this led to the elimination of the loader and the fitting of a hydraulic automatic loader.  The tank also featured new NBC equipment and IR gear, building on the technology already present.  A distinctive feature was is its small, widely spaced, steel road wheels – very different from any other soviet tank, before or after. The result was something of a mixed bag.  The 125mm gun was hard hitting and the tank well protected, surpassing the M48/60 and Centurion in widespread NATO use at the time and equalling, if not surpassing, the Chieftain in some areas.  Sadly it also equalled the Chieftain in some less useful ways, being unreliable, maintenance heavy, and expensive to produce.  Still, the tank presented a very real increase in threat to a NATO force made up mostly of 1st and era;y 2nd generation types.

The T-64 was never offered for export, and only equipped the tank divisions of the Soviet army (The cheaper, but almost as effective, and certainly more reliable T-72 equipped the motorised and export forces) but still managed an impressive 13,000 built.  Compared to the T-72, it had a faster auto-loader, ammunition lower in the hull to present less risk of being detonated, better driver controls and a remote controlled AA MG.

The T-64 would be upgraded throughout its life.  The A version received an updated fire control system and night fighting capability.  The B version, contemporary with Team Yankee, received a gun launched missile (a missile less B1 variant was also developed) to increase long range punch, laser range finder, improved stabiliser, crosswind mast and smoke launchers.  ERA armour also began to appear on the T-64 too. The T-64 saw very limited action in Afghanistan (a trial use was abandoned as the power pack proved difficult in the hot and high conditions) and most of its combat action has occurred in post soviet conflicts such as the Transnistria War and by both sides in the ongoing conflict in East Ukraine.  The T-64 was meant to be superseded by the Gas Turbine powered T-80 but the end of the Soviet Union largely put paid to that and it soldiers on alongside the T-72, T-80 and T-90 type tanks.

Opening the box presented the first surprise – The T-64 sprue was green!  The v4 Flames releases had already introduced Tanks-esque coloured sprues but this is the first we’ve seen of in Team Yankee.  The BMP sprues in the box were still grey so it’ll be interesting to see if that carries over as stock is used.

A quick inspection of the sprue (whilst sitting in the park of all things) revealed that the component to sprue joins were relatively small and easy to trim; along with a poorly realised commander’s hatch, about the only issue that I could level at the previous T-72 kit was that the joins were very chunky and tended to need a lot of cleaning. The hull halves and back plate went together very precisely, although the side skirts don’t really locate on anything so the ft for them was judged by eye. I took a moment to take in the detail that’s been captured – there’s very little space not covered by some vane, conduit, or stiffening indent. The only issue I really encountered in the build was on removing the AAMG from the sprue. The commander’s searchlight is part of the MG and one of the connections of the part to the sprue, but is mounted via a thin connector that was stressed by the removal from the sprue.  Something to watch and, as ever, the AAMG is duplicated to provide a figure case attrition replacement! Whilst assembling the turret I noticed these indents and wondered what they were for. Turns out they are for the Smoke Launchers!  The launchers come with a part of the hull attached that mostly fits in the indent.

I know some didn’t like the way the T72 mounted them so this seems a fair compromise between integral launchers (easier to assemble but often suffering from ugly detail compromises) and separate launchers  (nicer to look at but harder on the assembler).

The turret, like the hull, has a lot of detail captured; no more need to add the cable conduits to the searchlight/launchers as they are already present!  Other details like the formation light on the top rear, various sights and stowage boxes present.  The snorkel parts locate via a tab into the rear stowage box which worked well for making the build easy. Front on and the only compromise of detail is the driving lights as is often the case. The T-64’s road wheels are noticeably smaller than the T-72; a noticeable recognition feature if the tank, along with it’s long 125mm gun.

Lots of detail on the rear.  The external tanks are a single piece that makes for a quick assembly although in real life its two separate tanks that are nearly butting together.  As ever the mounts are part of the tank piece so you can’t easily do a true depiction of the tank with its tanks dropped off, but everyone seems to design their tanks to do it that way so I can’t fault BF on it.

The unditching log is a little smooth and featureless.  BF’s is almost certainly the scale correct look but the Plastic Soldier T-55’s knobbly look has spoilt me here.

Lots of detail from the top. The relatively compact engine deck that the opposed piston engine created is visible here. All in all, this is probably my new favourite Team Yankee kit.  It’s well constructed such that it’s easy and quick to build without compromising detail, beyond the normal things like blocky driving lights, and even I don’t want a separate driving light at 15mm! The T-64 is comparable to the T-72 in most stats but featuring an advanced stabiliser, for better mobility whilst firing in the form of its higher tactical speed, and better armour; a 4+ save versus a Milan!  Side Armour 9 (13 vs HEAT thanks to BDD armour) is also pretty handy.  The optional Songster missile (a flat 2pt upgrade for the company) provides a longer range punch at the cost of a lower firepower.   The T-64 is about a point more expensive than the T-72 but feels like its worth its points but it is a shame its hydraulic loader didn’t get reflected in a higher rate of fire (6 second cycle time compares favourably to manually loaded guns).

I still think a Soviet Armour Battalion based force struggles to make its impact for its points.  The better choice may be a  company of 6 or so T-64 supporting a BMP Battalion – or make use of the minimum sized platoon discount and go for a “Battalion” of HQ + 2 x 3 tanks for about the same points!

I’ve been running my T-72 as proxy to try the rules out and the advanced stabilizers make for a very mobile beast but I have also found I was putting too much faith in the 4+ save vs a Milan and having my dice give me a cruel lesson in statistics!

There are no other plastic kits on the market so the competition comes from the traditional resin and white metal manufacturers, but the type is poorly represented in the market.  QRF (£6) and Khurasan ($13.99 or £10.85 at current exchange rate) have various models of T-64.  Skytrex have shown off some WIP shots but don’t have a model out yet whilst ArmiesArmy have yet to turn their attention to it.  So, at this point, the plastic T-64 is comparable in price (or better if you go for the Yuri’s Wolves box) to the QRF white metal example and the choice will come to personal preference.  Personally well captured, CAD sculpted, plastic wins out for me here.

As a kit, the T-64 is excellent and a fine addition to the Soviet range. It builds quick and easily but doesn’t show it in the looks.   The Yuri’s Wolves boxset makes for amazing value too.

In game, the T-64 is better than the T-72, as it should be. But is it the answer to offering the Soviet players something other than Spandrel spam?  Possibly not. But why be a slave to Meta when you can put some of these sexy beasts on the table?