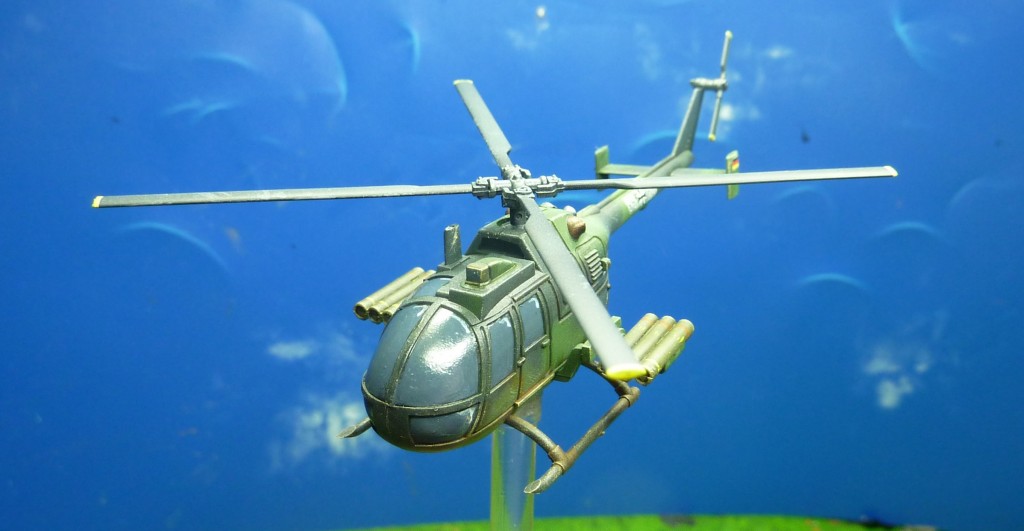 Whilst Soviet anti-air makes them tricky to use, I’ve always had a quartet of AH-1 in my US army and found them a very useful asset for doing everything from being an ambush unit to a very mobile reserve unit.  So with Leopards bringing the dedicated anti-tank variant of the Bo-105, the PAH-1, it was safe to assume that box of them would make their way into the army.  But do they outgun the AH-1?  Or will they just be another kill marking on the SA-13?  Read-on.

The PAH-1 anti-tank helicopter was developed as a platform for the Euromissile HOT anti-tank missile.  The PAH-1 combined the commercially developed and highly acrobatic Messerschmitt (yes – *that* Messerschmitt)-Bölkow-Blohm Bo 105 platform with a pair of fuselage mounted sponson carrying three launch canisters each, plus a stabilized gunners sight mounted in the roof of the cabin – allowing the launch helicopter to hide the rest of the fuselage behind a convenient German woodline whilst the sub-sonic missile was flown to the target.  212 were ordered with delivery starting in 1979 and ending in 1984 – ideal for the Team Yankee timeframe!

Whilst the Bo-105 offered excellent visibility and maneuverability in a compact air frame (watch the video and see how small a clearing they hide in!), the helicopter was only considered a stop-gap measure due to its lack of a true night fighting capability and such non-essential things as “armour” or “IR countermeasures” as one would expect for a civilian base platform.

Despite this, the hunter killer tactics suited the helicopter and it served until eventually replaced by the much delayed Tiger attack helicopter in the 90’s.

The initial helicopter kits for Team Yankee, the AH-1 Cobra and Mil-24 Hind, were good looking kits with a few niggling issues; mainly fiddly pylon weapons and a central join line that was easy to misalign and create an ugly appearance.  The Cobra also has skids that had marginal contact with the body and thus snap off at the first opportunity in use or a transit case. The sprue – not a huge part count but every part does its job. Decals and magnets are also included

The Bo-105 appears to take on the feedback from the first two helicopters to produce a kit that is a joy to assemble.  I found that the two parts of the hull fit snuggly together, requiring a light clamp at the rear of the tail boon only.  The canopy (continuing the BF trend, this is opaque with no interior detail) then fits in tightly to the remaining void to complete the fuselage.  All four of my PAH-1 went together smoothly and I only had to lightly run a scalpel over the join line to get a smooth finish.  Nice. Held together with just a small pinch

The Bo-105 is a skid based helicopter which had me worried, but the skid has a deep pin in socket join, rather than the shallow ball in socket join of the Cobra.  It doesn’t prevent the skit breaking through rough handling but a glue joint failure is all but ruled out.  Thumbs up for that one BF – do the same for the Lynx AH.1 please!

Finally, benefiting from the simpler weapons installation, the HOT missiles are pre-installed to the sponson, with just a top plate requiring to be fitted.  This makes for a much tougher table top package although the thin leading edge of the tubes seems to exasperate a slight misalignment. Trade-offs and, after having to patch up that quad TOW installation on the Cobra too many times, more than acceptable.

As with the rest of the review content, I had to build the kit by intuition only (two days later, BF put the video on the website – as always my timing is impeccable) but found no issues with that approach.  It seems everything can only be fitted in the way that the designer intended.  The only real confusion was the tail rotor.  There are two tail rotors on the sprue and, given it has a four bladed main rotor, I assumed it had a four blade tail rotor (generally the two rotors have the same number of blades).  Much like the Hind, in this case they don’t; the BO-105 has  a four blade main rotor and a two blade tail rotor.  It explains why I couldn’t see anyway to put the two bits together!  Having a spare tail rotor is a nice gesture given how fragile they can be in table top service.

The only real niggle I had was the rotor hub.  It *just* fits through the hole in the top of the fuselage so if you get the magnet slightly out of line it requires some wriggling to get it through.  Also, due to a cut out in the side of the fuselage, the shiny magnet can be seen quite clearly so I may need to paint the side of the magnet or dull it down with some matt varnish.  Finally, there’s a little bit of twist to the tail so the horizontal stabiliser can be fitted correctly but still be out of whack with the fuselage. Skids go deep into the side of the helicopter and are fairly chunky – should be tabletop friendly! There doesn’t appear to be a 1;100 Bo-105 currently on the market (e-bay showed a hit for a contemporary RMM kit – one for the (much) older listener) so side by shots are out here. Made in West Germany?  Just like the real thing!

All in all, it continues the high bar set by the Leopards plastic releases. Unlike the AH-1, the PAH-1 is entirely an anti-tank platform with missiles as its only armament.  Whilst Guided missiles can be used against other targets (helicopters and dug-in infantry) there’s usually a better weapon available.  On the other hand, the PAH-1 is *far* better at killing a T-72 from the front, the extra AT of the HOT missile providing a better chance of a kill.  Its also no worse at taking a hit, having the same save as a Cobra but better moral so a lone survivor will have less chance of bugging out (unless I’m the one rolling it).

One interesting thing about the PAH-1 is its presence on the force chart.  Its possible for a force to have *two* units of PAH, rather than the normal one.  Whilst eight PAH-1 may be excessive, two flights of 2 PAH-1 may provide a bit more flexibility on the table top (pop one to trigger the air defences, hope GtG saves them but have an easier ride on the second flight, plus better use of terrain) for no difference in points to a single flight of 4.

This is countered by lacking any “moving” fire and, more importantly, lacking even an IR night fighting capability.  A US player can go “attack at night” as a no-brainer.  A German player is going to have to consider that it suits his tanks but may render the air war moot (interestingly the Tornado as a dedicated all weather strike aircraft has this issue.  Radar doesn’t count for much in Team Yankee apparently…).

The PAH-1 is next on my painting table so hopefully we’ll see how they fare on the table soon.

In conclusion, the PAH-1 improves on the, already good, plastic helicopters that came before it.  In an army with so many options yet so few points to spare, they may struggle to make a case for having a single-role unit.  But as a dedicated tank killer with mobility on stealth its hard not to argue for a unit of at least two in a West German army.